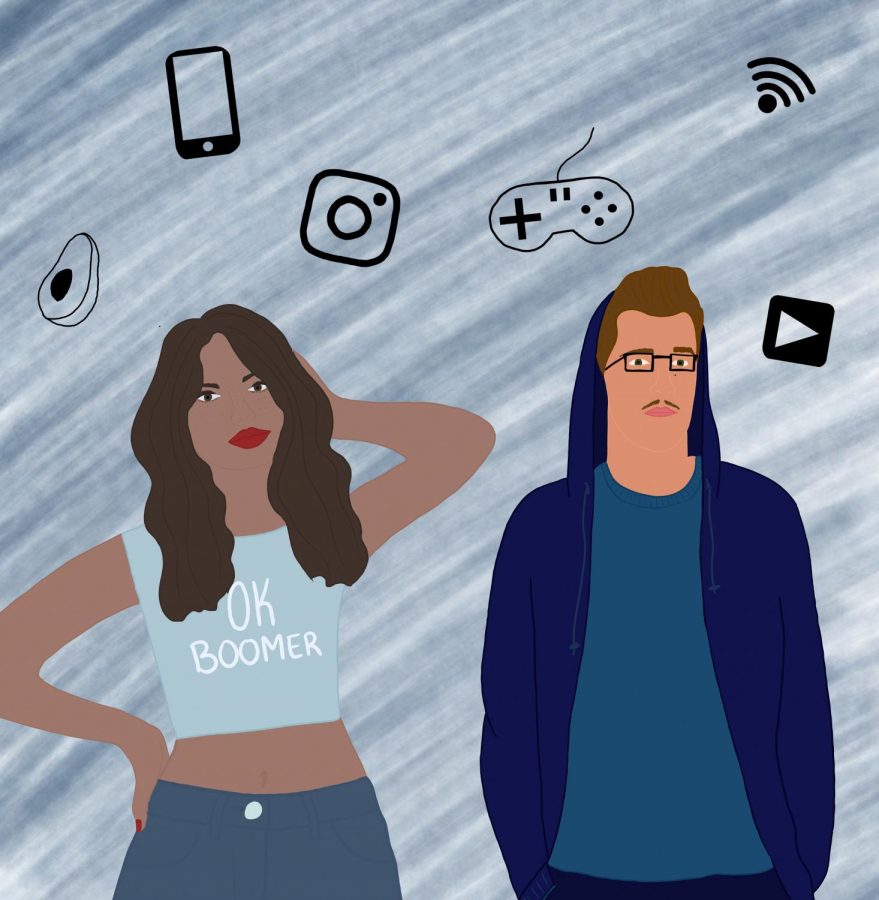 ‘OK Boomer’: Are you a millennial or Gen Z?

The confusing generational cusp on campus

Have you ever used a fidget spinner? Do you have a TikTok account? Do you remember 9/11?

These are questions that can answer a query many born between the years 1995-2000 have—are you a millennial or part of Gen Z?

Pew Research Center defines millennials as someone born between 1981 and 1996—meaning that Generation Z, as they view it, starts at 1997.

Dividing people into these categories depends on a variety of factors, such as the technology that was available to them, the state of the economy and global politics.

Michael Dimock, president of the Pew Research Center, said in an article “Where Millennials end and Generation Z Begins,” that the center expects to collect more data on this topic and adjust the threshold as needed for research purposes. However, they expect new data to establish more of a continuum than a hard threshold.

John Alberti, chair of NKU’s English department, has spent time studying pop culture and how it has changed over the years. He said it’s important to remember that people who exist in the same generation are incredibly diverse in lived experience. He views the concept of generations as a “chicken or the egg” situation. What comes first, being told you’re a millennial or being one?

He relates this to gender performance, a topic discussed in his Feminist Punk Rock class, which questions whether people experience gender as something that is intrinsically true or something taught through gender roles.

“We internalize those ideas to the point where it’s really difficult for us to even tease out—am I acting and feeling this way because that’s how I really feel or is it because that’s what I’ve been taught to do? At a certain point it’s become so ingrained in our experiences that the whole circle is hard to pull apart,” Alberti said.

On the topic of the latest “Ok Boomer” meme, Alberti said this attitude isn’t new.

“The people we call the boomers have been dominating American life for so long. Even the presidential politics, ‘it’s the boomers again, they never go away no matter how old they get,’” Alberti said. “But it’s not like you dislike them. Bernie Sanders has a big following among Gen Z and millenials, and he’s like 75 years old.”

On NKU’s campus, Generation Z dominates in terms of undergraduate degree-seeking students. According to data from the Office of Institutional Research, in Fall 2018, they took up 58.34% of that population. As it goes, this is only expected to increase each academic year.

Millennials only made up 34.8% of that population in the Fall 2018 semester.

“I’m Gen Z because I identify with the ‘cool guy’ culture of Gen Zers,” Hudson said.

Some students were not too sure what generation they belonged to. Eden Fischer (1996, millennial) is one of those people.

“I find myself relating to both millennials and Gen Z, but I don’t think I completely fit into either,” Fischer said.

They said they feel too young to be a millennial because there are certain experiences that they do not have that many millennials do. At the same time, they aren’t into the same things that Gen Z is into.

Katelyn Vinius (2001, Gen Z) said she was told she was Gen Z in high school, but she isn’t aware of the stereotypes that come with that distinction, other than the fact that Gen Z is very digitally oriented.

“I definitely relate to that, because I’ve grown up surrounded by technology, so I can’t imagine life without it. I think that alot of people in this generation relate to that,” Vinius said.

Caleb Wears (1998, Gen Z) said despite having “millennial tendencies,” he identifies most with Gen Z.

“I feel like now, ever since coming to college, I’m more socially aware. There’s a lot of stuff going on,” Wears said.

He mentioned that Gen Z really needs to be tech-savvy because people can’t get away with not having an email or not having their phone on them most of the time.

While there is certainly conflict between generations, despite the differences in technology and political circumstances, Alberti said steady expansion of the frontiers of freedom show more of a continuity between them. This is shown explicitly in the analysis of the different waves of feminism.

He said generations in general have manifested in a similar way. Younger generations do not have to deal with certain realities because of the work that was done before them. However, issues have morphed into other areas, and there is more solidarity between them than conflict.

With the generation after Gen Z, which Pew Research Center has estimated to be those born after 2012, reaching their teen years, who knows what society will be able to accomplish.