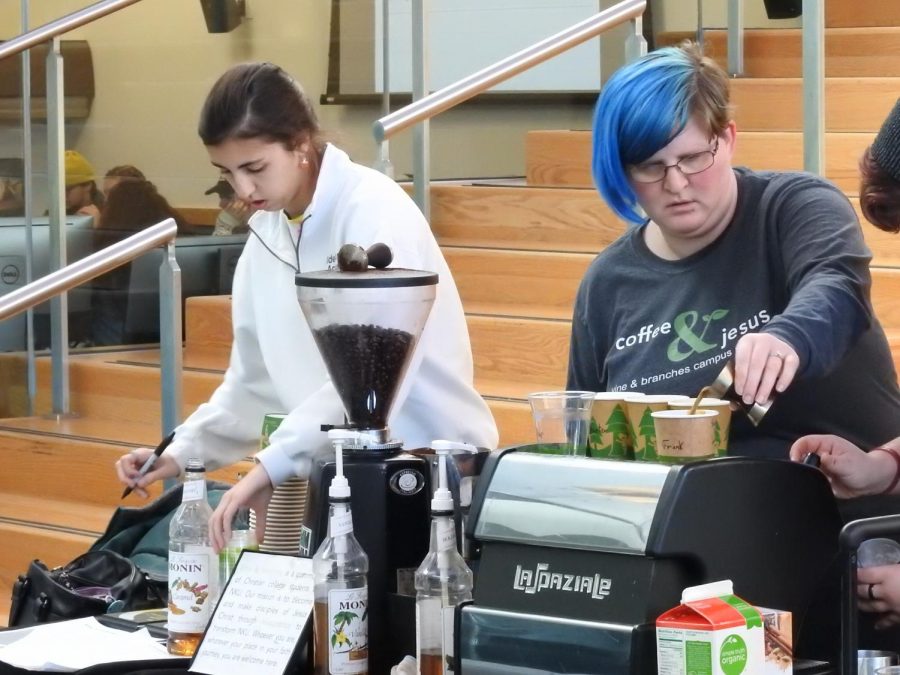 Vine and Branches (V&B), a ministry of the United Methodist Church on NKU’s campus, is trying to change the way people view Christianity by passing out free coffee to students according to the full-time pastor at V&B, Renee Jennings. She said her predecessor David Johnston conceived the idea.

“It came out of a conversation that we had about ‘how do we make ourselves less scary for college students to come up and talk to us?’” Jennings said.

Jennings said they bought an espresso machine to make coffee when Johnston was the campus pastor, but they were still figuring out how to use it. Now that the experimental phase is over, they have been perfecting the free coffee events for about five-and-a-half years now.

Jennings said that churches have earned somewhat of a bad reputation, especially with college kids.

“We recognize that the church has not made a lot of good press for itself in recent years, which grieves me on a level that I can’t fully express,” Jennings said. “We wanted to give something positive to associate with a faith group because I feel like most college-age students or young adults don’t have a lot of super positive things that they associate with church.”

Kayleigh Rinck, senior public relations major, and her sister Andrea Rinck, junior theatre and electronic media and broadcasting major, are both involved in passing out free coffee with V&B.

“We are here to share our love for God and coffee with everyone else,” Andrea said. “I think our goal is to say, ‘hey, we are here if you need us and we are not forcing anyone to be a Christian or anything. If you want to have a relationship with God or get to know God or just start your journey with God, we’re here to help you.’”

“I just like to brighten someone’s day,” Kayleigh said. “Some people need that caffeine. I know me and if I don’t have coffee, I’m super grouchy.”

Olivia Fries, sophomore human resource business management major, said that passing out free coffee is a way to spread the word of God, and also a way to get a group of people together that understand the struggles of daily college life.

“I mean, of course we want to get more people to join our organization and come and hang out during worship, and not even during worship; we hang out during the week too,” Fries said. “And not only that, but some people aren’t from around here, so they don’t have their home church right here.”

Fries said V&B is a great place for people of faith to express themselves and feel comfortable doing it.

“It’s neat just to be able to talk to each other, and you don’t have to be worried that somebody’s going to judge you based on your beliefs,” Fries said.

Jennings said their coffee ministry also helps them inform students about their organization and how they can get involved.

“We actually have had some students come in and check us out and have been very involved in our ministry and have grown a lot in their spirituality and their faith journey. And they found out about us because we were out serving coffee,” Jennings said.

Jennings said that she has seen a positive response as they continue to give free coffee to students. People get excited when they see the V&B van, according to Jennings, and that positive association is exactly what their goal is. In seeing this, she feels like some barriers between the church and young adults have been overcome and a certain level of trust has been built.

“Nobody will ever be turned away from our coffee table, no matter how many cups of coffee you come up for during the day,” Jennings said. “We give out coffee as an expression of love because we believe that love is unconditional, and love is freely given to us by our Creator. So, it’s a small expression of that unconditional care and concern and love that we get from God. We give it on campus through cups of coffee.”

Ultimately, Jennings wants NKU students to know that V&B cares about them and their wellness.

“I think if I want anyone to take anything away from the coffee ministry, it’s that you all are loved,” Jennings said. “We care about you all as the student body, and ultimately that’s what we’re here for is to communicate that through this ministry. That you are cared for, you are loved unconditionally and through all things.”