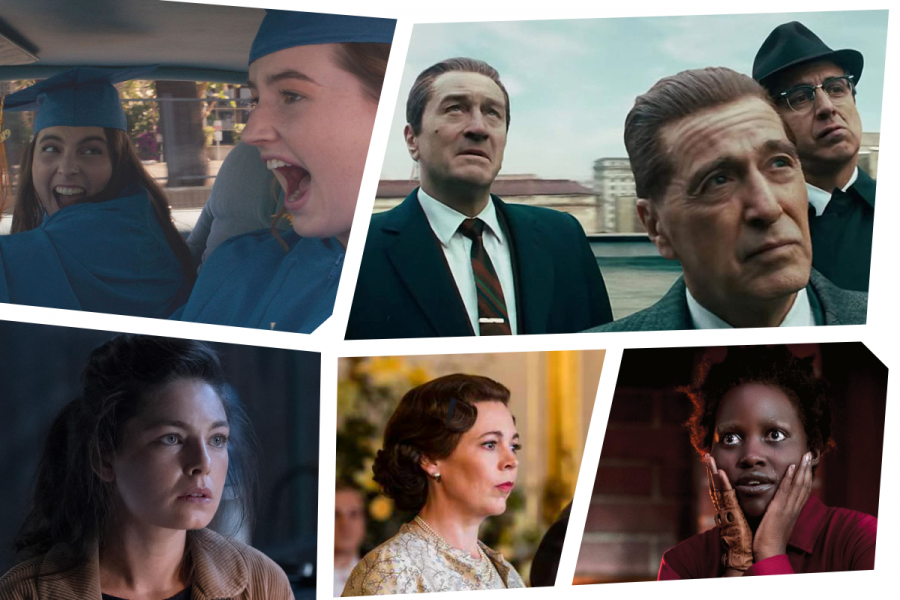 What’s coming to streaming in November

Don’t you love Cincinnati’s weather? We went from 80 degrees to 40 degrees in about a week’s worth of time. With these chilly temperatures, it’s the perfect time to snuggle up under a blanket and binge-watch some of the new shows available. Netflix, especially, is having a killer month, with one of their best slates of original content in quite some time.

It feels weird to say one of the best films of the year, made by one of the greatest directors to ever live, will be a Netflix exclusive. But that’s exactly what’s happened with “The Irishman.” Martin Scorsese, who previously directed mob epics “Goodfellas” and “The Departed,” returns to the world of the mafia with this film based on the nonfiction novel “I Heard You Paint Houses” by Charles Brandt. Robert De Niro, Al Pacino and Joe Pesci star in this three-and-a-half-hour drama that’s being hailed by some critics as the best crime-related film in years.

This historical epic, starring Timothée Chalamet and Robert Pattinson, is certain to produce a new phone background for some sorority girl somewhere on campus. Based on the plays “Henry IV, Part 1,” “Henry IV, Part 2” and “Henry V” by William Shakespeare, this drama stars Chalamet as Henry, Prince of Wales. This film seems to be Netflix’s attempt to make a “Game of Thrones”-esque drama without the dragons, so expect lots of elaborate, period-accurate costumes and lots of (literal and figurative) backstabbing.

For a different style of historical period drama, the Queen Elizabeth-centric series “The Crown” returns for its third season, with a brand-new cast. To reflect the aging of the characters, the roles previously played by Claire Foy, Matt Smith and Vanessa Kirby have been recast, and are now played by Olivia Colman, Tobias Menzies and Helena Bonham Carter. Fans of the series should be pleased, as the high production values, incredible acting and amazing direction from the other two seasons will most likely carry over to this one.

This quirky film was praised upon release earlier this year for breathing new life into the coming-of-age genre. It features two high school senior girls, Amy and Molly, who worry that they may have wasted their high school years studying too much and decide to go to a party. “Booksmart” has garnered critical acclaim for its positive portrayal of LGBTQ+ youth and its discussion of issues that are important to the current generation.

Adonis Creed returns to the ring in this sequel to the surprise-hit 2015 boxing drama “Creed.” Michael B. Jordan once again puts on the gloves as Creed, and Sylvester Stallone returns as iconic boxer Rocky Balboa. Adonis encounters Viktor Drago in the ring, whose father killed Adonis’ father Apollo Creed in the ring 33 years ago. Tessa Thompson also returns as Adonis’ fiancée, Bianca.

Still stuck in Halloween season? This gothic horror film, based on the famous novel by Anne Rice, should quench your thirst for a spooky movie. Tom Cruise, Brad Pitt and Kirsten Dunst star as immortal vampires living in the year 1791, and Christian Slater plays a journalist interviewing Brad Pitt’s character in the present day.

Every James Bond movie not starring Daniel Craig—all 21 of them—are available at your fingertips for some British espionage action whenever you please. The Sean Connery-starring films “Goldfinger,” “From Russia With Love” and “Dr. No”, and “GoldenEye” with Pierce Brosnan as Bond (which was the first to star Dame Judi Dench in her role as M) are the clear standouts.

One of Amazon’s first original series is finally coming to an end this month. The Man in the High Castle is an alternate history science-fiction drama set in a parallel universe where the Axis powers won World War II, and the United States is split into two territories occupied by Nazi Germany and the Empire of Japan. “High Castle” is adapted from Phillip K. Dick’s 1962 novel of the same name, and is executive produced by director Ridley Scott—who is most famous for “Blade Runner,” another Phillip K. Dick adaptation.

This horror drama from Jordan Peele, writer/director of 2017’s smash hit “Get Out,” made waves earlier this year for its social commentary and an earth-shattering performance from Lupita Nyong’o. A family of four on vacation to Santa Cruz must endure a night of terror, as four people that look exactly like them break into their house and attempt to murder them.

This film is incredibly unique—even for Wes Anderson, who is known for his signature directing and writing styles. Owen Wilson stars as Francis, who survived a near-fatal motorcycle accident and decides to go on a trip of self-introspection with his two brothers Peter and Jack, played by Adrien Brody and Jason Schwartzman. Fans of Anderson’s other films should absolutely queue up this quirky comedy.

One of the most famous courtroom dramas ever—and one you’ve probably seen clips of before in some class, somewhere—”12 Angry Men” focuses on a jury of 12 who must make the decision of whether to convict or acquit an 18 year old accused of stabbing his father to death. It’s well known for taking place in a single room, forgoing any change of location to focus on the characters and their conflicts when trying to make the correct legal decision. “12 Angry Men” is a compelling watch, even over 60 years later.

This neo-noir mystery still has people on the Internet speculating what it all even means. The Hollywood-focused psychedelic thriller was controversial with critics on release, but is now regarded by many publications as one of the greatest films of the 21st century—in fact, BBC listed it as the best film made since the year 2000. To say anything else would be to spoil the fun, but nearly 20 years later there is still nothing else quite like “Mulholland Dr.”