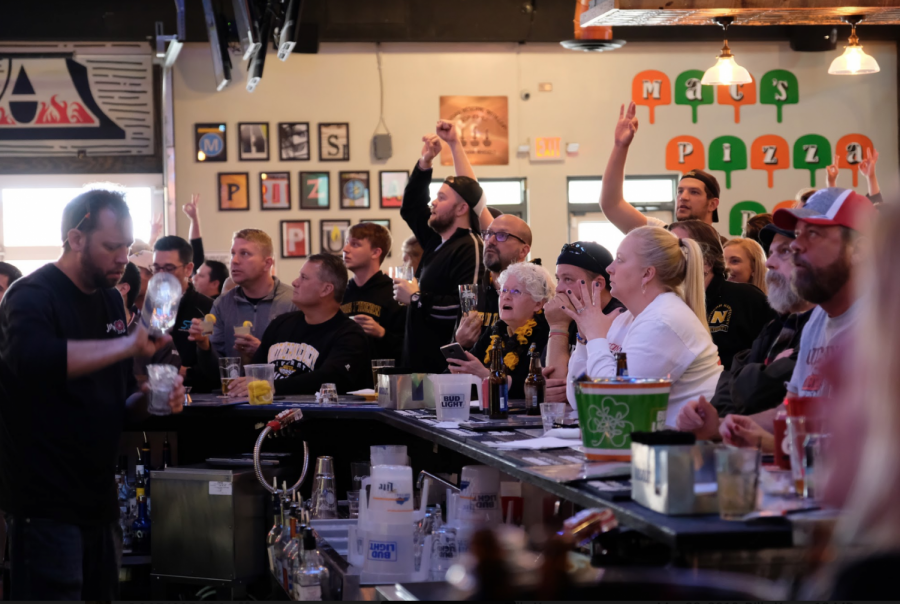 NKU men’s basketball fans at Mac’s Pizza Pub Cold Spring watch the Norse take on the Texas Tech Raiders in the first round of March Madness.

The pizza joint steps in to keep an NKU tradition alive

UPDATED Oct. 1: Mac’s Pizza Pub officially announced their plans for their own spin on karaoke nights Oct. 1. In addition to karaoke, Wednesdays will also feature beer pong—which will have an entry fee of $12.50 per team, and the winning team gets to keep playing—and a new late-night food menu.

In need of a new karaoke spot?😉 Introducing Beer Pong Karaoke at @MacsNKY Wednesday nights from 10pm to 1am! 🎤 Beer pong rules posted below 🍻also check out our new late night food menu! 18 and up welcome, but as always we have a zero tolerance policy for underaged drinking👍🏼 pic.twitter.com/Txl8DwUpeb

The original story is below:

For many NKU students, going to the Applebee’s location just outside of campus every Wednesday for karaoke nights is a tradition.

So when the popular restaurant chain announced this past Wednesday that karaoke nights were no more, several students took to Twitter to criticize the decision. Some went as far as starting a #boycottapplebees hashtag. Then, a Mac’s Pizza Pub employee announced on Twitter that Mac’s would be hosting its own karaoke nights from now on.

they really have. only reason i went tbh https://t.co/v9Legmne9V

The Applebee’s in Highland Heights declined to comment on why they chose to end the long-standing karaoke nights.

Mac’s Pizza Pub Cold Spring owner Harvey Germain—which he makes sure to point out is pronounced like the popular football club, Paris Saint-Germain—had already made plans over the summer to have karaoke nights at Mac’s. However, he held off on announcing the plans until the school year was well underway because he didn’t know how much of an audience they would’ve drawn in the summer months. Germain said he found out about Applebee’s cancelling karaoke at the same time as everyone else.

“I don’t get to eat out a lot when I’m in this area. So I actually didn’t know they were doing karaoke until just recently,” Germain said. “Then someone told me yesterday that they’re not doing karaoke, and I was like, ‘Okay, what day should we do it?’”

On karaoke nights, Mac’s will be running a 9 p.m. to close happy hour special. The pizza joint is also introducing a new ‘College Night’ event, which features a DJ playing and a special mixed drink available for $1 every month. This month’s drink, Purple Flurp, is inspired by the iconic Nickelodeon series Jimmy Neutron. The drink contains Svedka blue raspberry, triple sec, grenadine and a choice of cotton candy or strawberry Faygo. The event’s other deals include $2 taps of Pabst Blue Ribbon and Natural Light, $3 draft beers from Stone Brewing and Rogue (subject to change) and $4 for two slices of pizza.

Germain said Mac’s isn’t trying to recreate the wheel with these events; they just want a good environment for college students to be able to socialize in, and that it’s important for their location to have traits to make them stand out from the pack.

“Culture and inclusion and music and energy. Those are the biggest things,” Germain said. “At the end of the day, we’re just talking about pizza and beer, so the only thing that will separate us from anybody else is our energy, a fun environment and doing new things.”

Germain mentioned other local pubs with a fiercely loyal crowd, like Billie’s Skyline Tavern and Barleycorn’s, and hopes Mac’s “has something like that with students in the next couple years to come.”

“We’re a fun place to party. We can provide a clean, safe environment, and people have a really good time. We’ve got competitive pricing, no matter what,” Germain said. “If you like good, positive energy, this is a great place to be.”