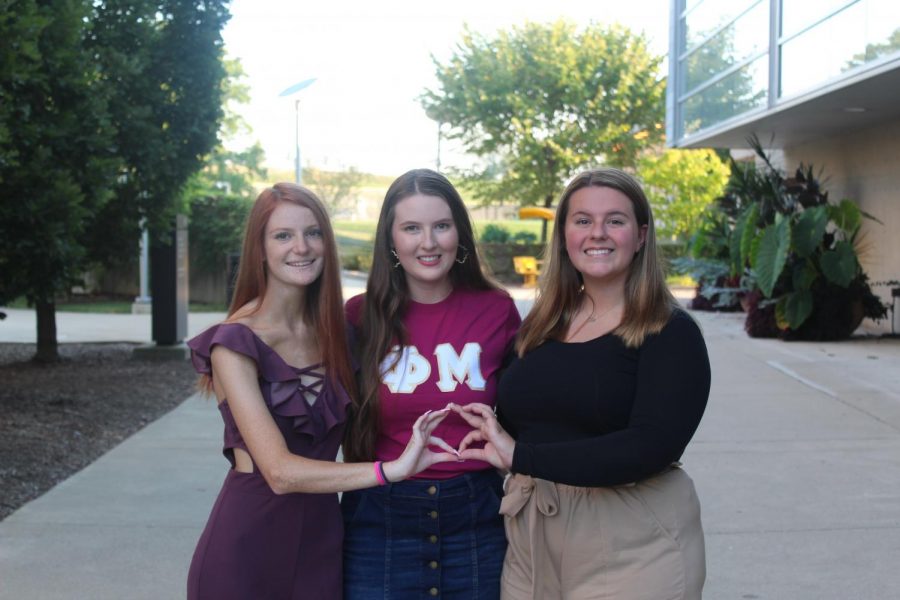 The young sorority celebrates its success

Phi Mu will be celebrating its fourth year at NKU on Nov. 12, 2019. Rachel Henry, a senior psychology major and current president of Phi Mu, was one of the original members who signed the charter that officially established the sorority at NKU.

“This is going to be our fourth year coming up, which is a little bit crazy to think about because it feels like just yesterday,” said Henry. “Some goals that I have for Phi Mu would just be to continue growing and continue being a presence here on campus. We had an amazing fall recruitment. That was one of the goals that I had, and we met that goal, which is amazing.”

One of the new sisters at Rho Nu is Brianna Collins, who is a sophomore majoring in EMB. She was a part of Phi Mu at Baldwin Wallace University before she transferred to NKU.

“I chose this chapter specifically because the girls were welcoming from the first minute that I even brought the idea to them that I wanted to join,” said Collins. “I think that they were so welcoming and open armed that I just had to come here.”

Phi Mu stands out among Greek life because it is still growing and continuing to change, Henry said.

“I think my favorite part of being in this chapter is just the fact that your voice is always heard because we’re always up for new ideas. We’re always interested in something new because we don’t have that set, rigid way that other chapters might have,” said Henry.

Because Phi Mu is still a young sorority, there are a lot of opportunities within the sorority for leadership. The Philanthropy Chair, Gabby Manley, was drawn to Phi Mu for that reason.

Manley was able to grow in time-management and public speaking with the help of her sorority. Being a part of Phi Mu helps women to step into leadership roles, but it pushes them to grow in other ways as well.

“With my sorority’s help, I was able to get my academics straight, create a plan to better study and they held me accountable. And because of it, I got the most improved GPA in our chapter … and not only that, they recognized the fact that I had been working so hard, which meant a lot to me,” Manley said.

The sisters of Phi Mu also push one another out of their comfort zones and help each other try new things.

“I’ve grown by coming out of my shell,” Collins said. “I think I’m growing because they are encouraging me to do things that I wouldn’t do without them.”

Phi Mu stays busy with philanthropic, social and sisterhood events, as well as volunteering. On Friday, Sept. 20, at 4:00 p.m., Phi Mu is doing a philanthropic event called Bonnamu, a music festival where all proceeds will be donated to Cincinnati Children’s Hospital. Lost Henry, Big Smile, Campus Rex, Fruit For Thought, Nichole Bezold, Tonality and some Phi Mu sisters will be featured artists at Bonnamu. Go to https://phi-mu.ticketleap.com/bonnamu/ to find out more about the event. For tickets, visit the Student Union or contact a Phi Mu member.