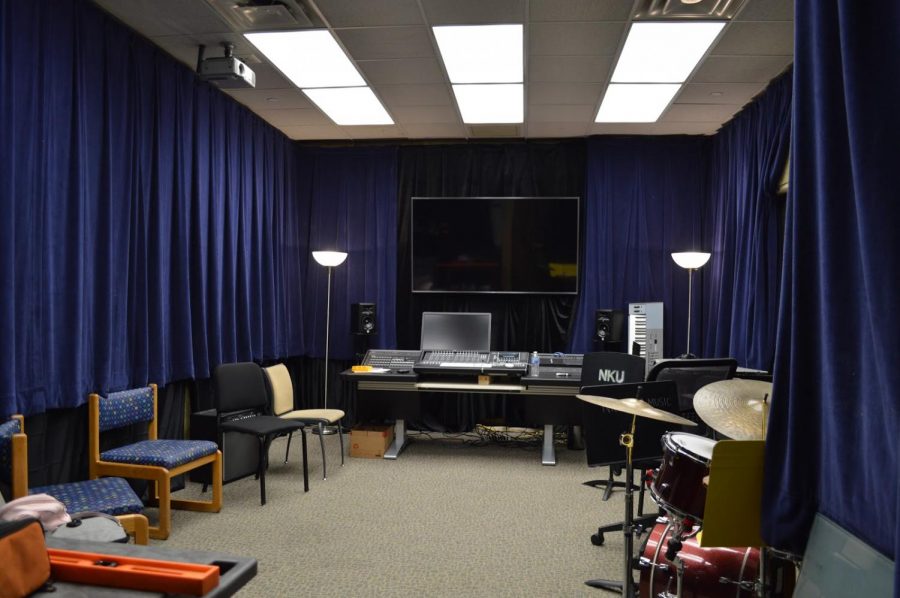 While many students were taking vacations on the beach or enjoying time away from the stress of the past semester’s final exams, NKU’s music department spent their summer converting a space in the Fine Arts building into a functioning studio for the audio production program.

Audio production is the understanding of how sound is recorded, stored, edited and reproduced. Students in the audio production program would be studying how to deal with sound as it relates to music, theater and video.

For head of the music department Brad McCombs, building a studio on NKU’s campus is a way to help the department better support the students in the program, giving them the opportunity to thrive in classes and to gain more experience. Because audio production is such a hands-on major, it’s important to be very involved, and not having access to a working studio here on campus made that difficult for students.

Jacob Hagedorn, senior jazz performance and audio production major, recalled a time when he was sitting in class when a professor was teaching them about different audio mixing techniques, and how challenging it was to grasp some of those concepts with not being able to see them in context.

“It’s really hard to pull up a studio session when you don’t have any of the programs on computers in a random classroom in a random building,” Hagedorn said.

Having an audio production program without a studio to show is something that hindered the department in terms of student enrollment as well. According to Hagedorn, if prospective students tour NKU with the intent of declaring an audio production major and don’t see a studio, but they tour a different college and see that they have a studio, students are more likely to choose the other college.

With the audio production major being introduced to NKU in the 2014-15 academic year, the studio was four years in the making, with equipment being bought by the department a little at a time over the years. But space was one of the biggest hurdles they had to jump in order to get the studio up and running for students, and until recently, the equipment was being stored in a smaller studio in the Fine Arts building that was too small to be used by a class of 15 students.

It took some time and negotiation with the music program and faculty in order to secure a space large enough to house the studio and make sure that they had the resources on campus in order to properly support the students in the program. This year, over summer break, the equipment was moved into its new home on the third floor of the Fine Arts building and the sound treatment was put in to dampen the sounds for recording.

“We didn’t quite have all the pieces put together yet,” said McCombs. “And I think that finally, all the pieces are coming together. Some of that just takes time.”

According to professor of music and coordinator of theory and composition Dr. Kurt Sander, the networking technology being used in the new studio would allow for the ability to record from any room in the building.

“Let’s say you have a concert going on over at Greaves Concert Hall, you could record the orchestra by simply running it through the network,” said Sander. “Or, if you wanted to record a student recital in the choir room, for example, you could just run an ethernet cable to that and record to the network that way.”

Additionally, NKU has hired a full-time professor of practice, Ashley Shepherd, to help with running the equipment and teaching the studio classes how to better engage in a professional manner with the equipment.

Having the studio on campus will give students the opportunity to work on the equipment that they’re learning about, according to Sander. If the students are given homework assignments, they’ll have access to the on-campus studio, which will make completing those assignments easier since they won’t have to worry about finding time in a local studio outside of class anymore.

“They’re able to implement a lot of the things they learned right away, in an actual functional facility,” said Sander. “That takes it out of the theory and puts it into practice.”

The studio will create opportunities for the students to work on collaborations outside of the audio production program, as well. McCombs said there’s a possibility of bringing in animation classes to work with the students for music scoring, or developing soundtracks for films and videos. There would also be opportunities to have students from other departments come in and record demos with backing tracks as well, according to Sander, who spoke of a musical theater student who composes his own musical theater scores.

Being given the opportunity to work with other students outside of the audio production program is something that excites students like Hagedorn, who was intrigued by the idea of required studio hours when he was touring other campuses before coming to NKU.

“You ideally should be graduating and have recorded some sort of record or album or some sort of project,” Hagedorn said. “And not having a studio on campus is very hindering to that.”

For students like Hagedorn, having an on-campus studio that provides the opportunity to record those albums and projects and work with other students to do it is a dream. It takes out the worry of finding a place to record, and it makes getting those projects under your belt for after graduation a lot easier for students.

“Eventually, there’s this hope that we can also allow our students to use this facility to record external bands and ensembles,” said Sander. “To bring in outside groups who want their music recorded. And it gives our students real world experience there, too.”

“You’re touring a place and there’s people working on a project or there’s recording happening, like this is what you’ll be doing. That’s certainly going to excite more students,” said Hagedorn.

For those looking to learn more about the program, the music department is planning on opening up the audio production facility and the new studio during the School of the Arts showcase on October 17-18.