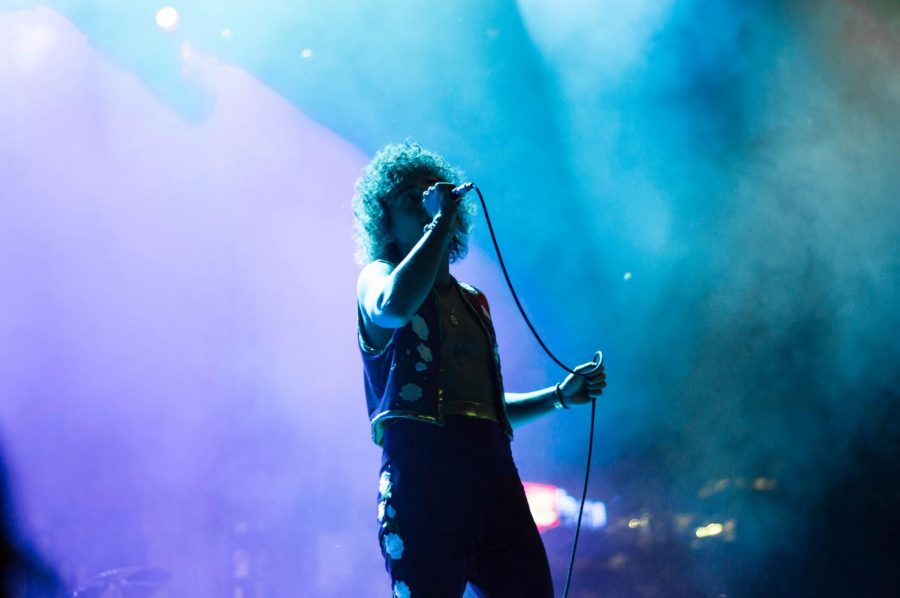 Cincinnati’s Bunbury Music Festival generated a large amount of buzz over the weekend with acts like Fall Out Boy, Greta Van Fleet and The 1975 headlining the event. The three-day event hosted a diverse array of musicians, from indie pop group Jukebox the Ghost to eclectic hip-hop duo Run the Jewels, and provided a vast selection of food vendors for festival-goers to spend time with until their next favorite act came on stage.

Regardless of your music taste, Bunbury was sure to deliver an unforgettable experience.

While the obvious crowd favorites were Machine Gun Kelly and Fall Out Boy, some notable performers on Friday included Taylor Janzen and Pigeons Playing Ping Pong.

“I saw people singing along this time,” Janzen said.

One of her music inspirations includes Paramore, whose drummer Zac Farro created HalfNoise. Janzen was excited to see HalfNoise playing Bunbury, but unfortunately she didn’t get to attend their set since they both played at the same time.

Maryland based funk jam group Pigeons Playing Ping Pong created the perfect ambient background music. Their early evening set was prime time to take a break, munch on some Island Noodles or sip refreshing Lemonade Shakeups and get lost in the alternative sound.

Fall Out Boy generated the biggest crowd of the day. They performed classic favorites like American Beauty/American Psycho, Uma Thurman, Sugar, We’re Goin’ Down and more.

Fireworks shot off in the distance during Fall Out Boy’s set due to the Cincinnati Reds victory against the Washington Nationals over at Great American Ball Park, adding to the high energy atmosphere.

During their show, Fall Out Boy lead vocalist Patrick Stump pulled a young fan onto the stage, telling him they wanted to give him an experience so impossible his friends at school wouldn’t believe that it happened.

They didn’t lie. Fall Out Boy’s performance was unbelievable.

Artists to look out for from Saturday’s group are 90’s Kids and Jukebox the Ghost. Both bands interacted with the crowd in a way many performers don’t.

Lead singer of 90’s Kids Corey Mouch jumped into the crowd while singing the band’s first lead single Champagne. He also stuck around after their set at the Sawyer Point stage to meet and talk to fans.

Jukebox the Ghost delivered an exciting show with a cover of Queen’s Bohemian Rhapsody, drawing fans to sing and dance along to the classic. The band made sure to remind the crowd, multiple times, that they’d be at the merch table to give autographs, take a photo or just chat.

Saturday proved to be the hottest day of the weekend, so many festival-goers were found relaxing in the shade near the acoustic stage to avoid the 82 degree heat. Stopping by the Streetpops vendor or grabbing a Walkin’ Waffle before relaxing under the trees proved a good way to cool off.

By 9:45, the Monster Energy mainstage was packed for Greta Van Fleet. With their classic rock sound, it almost felt like Bunbury 2019 flashed back to 1979. Their show drew a diverse crowd, from a middle-school girl in an AWOLNATION branded shirt in the pit to parents rocking out on the lawn.

For anyone thinking they were born in the wrong generation, Greta Van Fleet was able to provide a show that transported you back in time.

As the most anticipated day of the weekend for many, Sunday had bülow, Friday Pilots Club, The Candescents, Samuel Day, Laura Sanderson, Triiibe, The Aces, Trauma Illinois, Reignwolf, The Clarks, Parker Louis, Streetlight Manifesto, Clutch, lovelytheband, Girl Talk, Run the Jewels and The 1975.

Utah-based alternative band The Aces kicked off their first festival of the season on the Monster Energy mainstage. Despite a malfunction with lead guitarist Katie Henderson’s instrument prompting her to miss her guitar solo during Holiday, the all-female group kept up their infectious energy throughout to deliver an exciting, over-the-top performance. Crowd favorites included the songs Stay and Stuck.

After The Aces left the stage, many fans didn’t budge. A few rushed to the barricade to wait for The 1975, who wouldn’t be performing for another five hours. Some held spots so their friends could go enjoy other acts or come back with Lemonade Shakeups, while others refused to let other fans ahead of them. One fan said she sacrificed seeing lovelytheband just so she’d keep her spot for The 1975.

A stop at the Brü Brothers coffee stand for a cup of nitro cold brew restored energy for those who were beginning to feel the effects of non-stop live music. Grab an empanada at the Colombian Arepa stand and you were set to tirelessly enjoy the rest of the night.

Coming from L.A., lovelytheband performed hits such as Make You Feel Pretty, Broken and Coachella—replacing the song’s Coachella lyric with “in your head it’s Bunbury every weekend”—and a cover of Mr. Brightside by The Killers that whipped the crowd into a frenzy.

“You sound like you’re from London, I know you’re from Ohio,” lead singer Mitchy Collins belted in Make You Feel Pretty as the watching fans screamed Ohio back at him.

Once lovelytheband finished, the crowd dispersed across the field back to the Monster Energy mainstage to await hip hop duo Run the Jewels or The 1975—or both.

Many determined fans of The 1975 shoved their way through the pit the second Run the Jewels left the stage. It was truly a free-for-all at that point, with those who had been waiting the last five hours being pushed out of their spot. The pit wasn’t a place for the faint of heart, but a space for die-hard fans to elbow their way to the front—if they were let through.

The long-awaited final act of the festival began as lights flashed on The 1975’s signature box motif on stage, with screams drowning out any other sound in the vicinity as the band walked on stage launching into Give Yourself a Try.

Bunbury had moments for every type of festival-goer. Flower crowns, orange and yellow “pollen” powder dusting arms and legs and faces, meet and greets with band members, new music to discover and a duck named Sean all made for an unimaginable festival experience. Don’t miss out on Bunbury next year.

Listen to our top choices from Bunbury this year below.