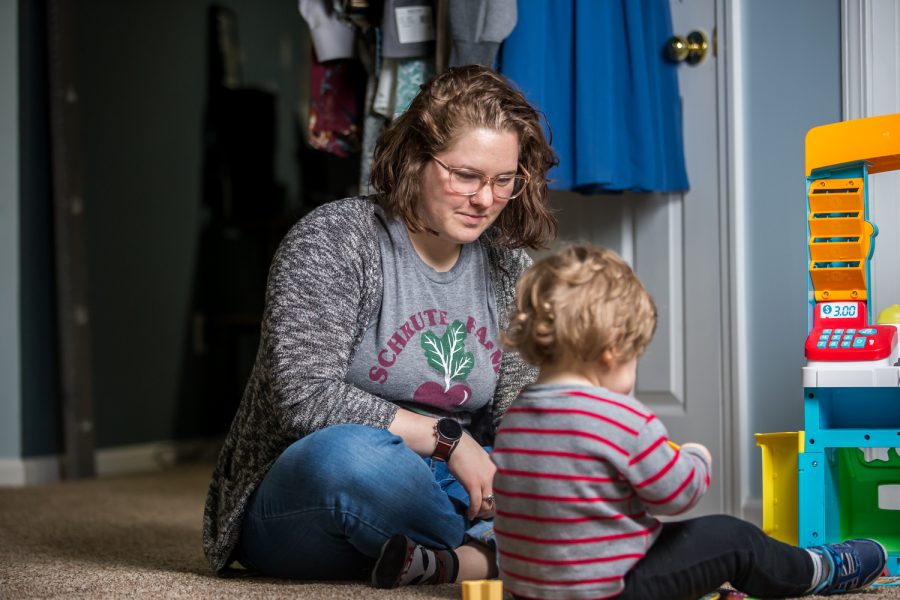 Womanhood and motherhood: how one student chooses both

Charlotte “Charley” Kalfas knew that her relationship was going to last a while. So, it was an easy decision to get married to her high school sweetheart while still in college.

Shortly after having the Christmas-themed wedding she always dreamed of, she knew something could be wrong; her method of birth control failed.

One month later, Charley Kalfas, senior English major, found out she was pregnant.

She was scared, terrified and nervous. She stayed up that night and cried. Her experience with kids was limited—she never babysat growing up. The first diaper she would learn to change would be on her own child.

“In my mind, having a kid was going to prevent me from continuing to go to school, our jobs, do anything that I wanted to do,” Charley said. “And, you know, as soon as [her son] was born, that completely flipped.”

Despite pregnancy typically being a joyous time, she said she hated it. While pregnant, Charley said she no longer felt like her own person.

“I felt so separate from the baby that I was growing. I felt like there was no way that I could relate to having a child,” Charley said. “I just felt like my body wasn’t my own anymore.”

In September 2017, Charley gave birth to her son, Sammy. One week later, she returned to school, jumping back into the coursework she missed, while navigating being a new mom and a student. 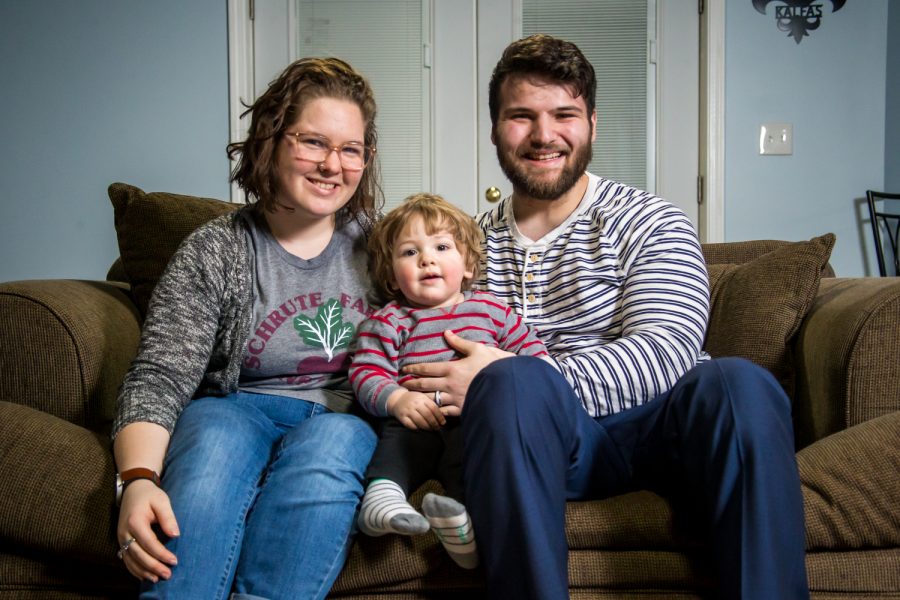 “The way you hear people talk, you’re supposed to become a totally different person, when you become a mom,” Charley said. “And your only interest is supposed to be your child … I still have the same passions, hobbies and everything that I had before I gave birth; it’s just now I have a tiny person to share them with.”

After giving birth, Charley was not “out of the woods” yet. She struggled with breastfeeding her son and eventually switched to formula to feed him. It was a decision that she researched and felt was best for her child, but it didn’t come without criticism.

“A lot of more conservative, traditional people I know were upset that they thought I was prioritizing college over motherhood,” Charley said. “In my mind, I’m not prioritizing one or the other. I’m just trying to do both. Because, I think in the long run, my child will have a better life if he has a college educated mother.”

Having a child has not stopped Charley from working hard, said her husband, David Kalfas.

“If sharks stop moving, they’ll drown,” he said. “Well, I wonder what it would look like if she stopped moving because she certainly doesn’t.”

Sammy is now over a year old, but that hasn’t caused Charley’s workload to decrease. Currently, she’s the editor-in-chief of Loch Norse Magazine, a student assistant in the English department, a double minor in honors and psychology with full-time student status and, of course, a mom and a wife.

Dr. Jessica Chiccehitto Hindman, creative writing professor and advisor for Loch Norse, said Charley demonstrates leadership skills in and out of the classroom.

“Charley is the epitome of someone who is doing it all,” Hindman said. “She does it with all of her intellect and creativity.”

Hindman said she had Charley in a creative writing class, where the students were tasked with writing small assignments to promote creativity. Charley’s assignments, Hindman said, were always elaborate and filled with creativity.

She can always count on Charley, she said, to provide other students in class with specific, critical and honest feedback that is also kind and constructive.

As the editor of Loch Norse, Charley oversees the section editors, arranges open mic nights, compiles and edits submissions, creates a story arc for the current edition, helps pick artwork to be featured and other tasks that help Loch Norse run smoothly.

Charley is a natural leader that people follow because of her work ethic and organization, Hindman said.

“The best leaders don’t have to really command people’s attention,” Hindman said. “When I look at her leading the rest of the staff, it seems very natural to me.”

Hindman said Charley is humble, never bragging about her accomplishments—or complaining about any of the work.

Charley encourages others to succeed and doesn’t let anything get to her head, David said.

David said he will come home, exhausted, after a day of work and Charley will read a book to Sammy, teach him French or run around the house and play with him.

“She’s basically Superwoman. In a 24 hour day, she accomplishes things that I can’t get done in a week and there are some days I feel like I’m really on top of things,” David said. “And she will leg out the amount of work that could have gotten done in that same time, in hours.”

Psychology professor Dr. Perilou Goddard had Charley in class while she was pregnant. She said Charley led by example, getting her work done in group projects and carrying her weight, without dominating the group.

Charley was inducted into the International Honors Society as a psychology minor, which is typically only given to psychology majors, Goddard said.

“She’s just one of the top students that I’ve ever had the privilege to teach,” Goddard said. “I really wish she were a psych major.”

Being a student and a mother has shown her a different perspective of being a women.

“Women are capable of doing so many things simultaneously, powerfully and well. It’s taught me to really appreciate what other women are doing because not everybody is trying to be a mom and go to college,” Charley said. “But every woman is struggling with their own pressures from various things.”

She hopes that she can serve as a role model to others, showing others that they don’t have to give up their goals when having a child.

“I hope that they’re seeing me,” Charley said. “People can realize that they don’t have to pick between motherhood and having success as a woman because that’s the big thing that a lot of women struggle.”