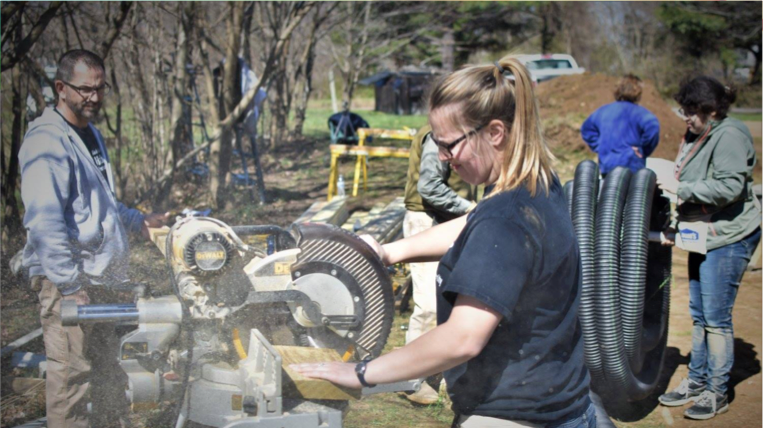 Several NKU students are using their spring break as a way to make a difference in the lives of others. Students from the Habitat for Humanity Campus Chapter will be travelling to Hardin County, Kentucky the week of March 10-15.

“It’s work; it’s not like a spring break where you lay on the beach. But, you feel good knowing you make a difference in the lives of the [people you help],” said Mark Wasicsko, faculty sponsor for Habitat for Humanity.

The organization plans to take between 10-15 students on the trip. Students will stay in a church recreation hall, sleep on air mattresses and eat meals with families in the community. The families will bring lunch to the site and supply dinner to the group.

Each morning, the Habitat group will go to the site at 8:15 a.m. and work until 6 p.m. After a day of building, students will have the evenings off. During this time, they usually play basketball or go bowling, said Wasicsko.

The group will build houses for first-time families, most of which are in a cycle of poverty. After having a house built by Habitat, the  families are more likely to attend college and break this cycle.

A 2011 survey by the University of Southern Indiana found that 57% of adults in a Habitat home were furthering their education.

“The students are changing the lives of families and generations,” Wasicsko said.

Sarah McIntosh, Habitat for Humanity’s President, will be attending her first spring break trip with the organization this year.

McIntosh began going to Habitat for Humanity on another school’s campus, as she was unaware that NKU had a chapter. When she discovered the NKU Campus Chapter, she knew she would enjoy it.

“Once I started going, I never stopped,” McIntosh said.

She just returned from a trip to El Salvador with other Habitat members. Although McIntosh doesn’t know Spanish very well, she learned people can have the same goal with a language barrier.

“You don’t need to know the same language to communicate…being kind is a language everyone can speak,” McIntosh said.

Habitat for Humanity allows students from all walks of life to become connected through service. Students with majors from communications to biology join the organization for volunteer opportunities. Besides the spring break trip, Habitat offers other service opportunities for students to get involved.

William Wegener, vice president of the campus chapter, said Habitat has allowed him to connect the clubs he is involved in. As a member of both Habitat for Humanity and a health professions club, he realized people in the healthcare field can benefit from volunteer experience. His big goal is to connect the two organizations.

“It makes me feel like I’m bettering my experience of being a student,” Wegener said.

While neither Wegener or McIntosh have been on the spring break trip before, they agree that they are looking forward to the end results of the trip and building relationships.

“You are volunteering, but at the same time you get to meet so many people,” said McIntosh.

Habitat for Humanity plans to make the trip as affordable for students as possible. The overall cost for students will be under $100, after a grant from Student Government Association that will pay for most of the cost. The price covers food and housing. Students will be carpooling to the site.

The group will be leaving NKU on Sunday, March 10 and return late on Friday, March 15. Any students interested in the trip can contact either Mark Wasicsko or William Wegener.