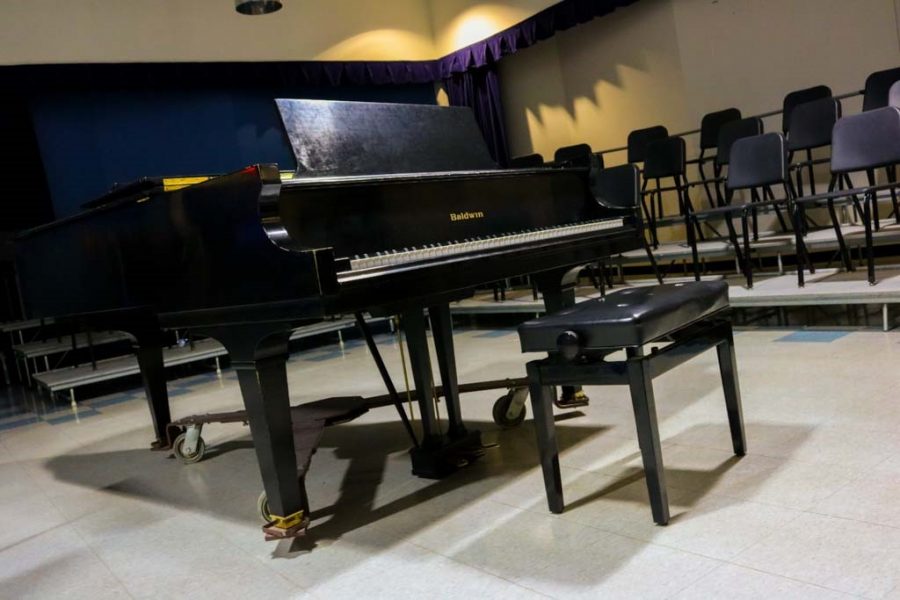 Music students have the ability to practice the piano in practice rooms.

The hectic lives of music students

It’s lunch time in the Fine Arts building on a hectic Tuesday afternoon. As students eat, many sit in groups to collaborate on homework while others take a break from school work entirely; some watch videos on their computer while others sit and joke about ensembles, homework, and each other.

Life as a music major is a seemingly never-ending pattern. But despite the fatigue that musicians can feel in the hallway, there is nothing but laughter, conversation and the faint sound of a trumpet practicing scales that ll these halls.

One student sits on his computer with his headphones in, completely focused on his computer screen, while a larger group of students sits and jokes around him. Three students, music education majors Madison Herzner, Wesley Adams and Heather Hacker sit at a table by the elevator. Herzner reads as Adams teases her. “Don’t sigh at me in that tone of voice,” he says jokingly at Herzner as she continues her reading. Hacker returns to the table with a ute and practice book in hand. “I gave you the notes for string methods, right,” Hacker asks Adams. He nods, and they begin their homework. It’s a more hectic day than normal and concerts are quickly approaching. “We never leave. Classes never end, but then again you know the life,” Adams says.

They are enthusiastic when they see their friends in the hallway. Johnathon Eaton opens his door to the Control Room which houses the electronic buzzing that is ever present on the second floor. Lockers cling as its opened by its owner, retrieving their instrument.

“Who’s playing down there?” Adams asks.

“I think it’s Delphy, but I don’t think she’s down here. I think it’s coming from upstairs,” Hacker answers.

Jazz students are noticeably absent from this scene. “I think they are in a master class today.” They are in “Concepts for the Woodshed: Practicing Techniques” and “Setting Goals for your Life and Career,” meetings. To be followed by “Big Band” and other Jazz ensembles.

When Herzner arrived on campus this morning, she had a very busy day ahead of her: non-stop class followed by a long, but fulfilling work night, 8 a.m. until 8 p.m. One lunch and homework break at noon, that’s it. And although her classes end at 3 p.m. she is working long into the evening. Herzner keeps her focus set during her break, this constant ow of students can seem distracting to an outsider, but she stays focused and determined to get home before 9 p.m. tonight.

When these students aren’t working or at school, they practice for hours, sometimes over three hours a day. And next week will be extra special for Herzner, two concerts for two different concert ensembles that she is in.

“Honestly, commuting can be rather difficult especially when I have to come back a er work some days to either practice more…perform concerts myself,” Herzner said. “When there are concerts, I can’t work or teach because the rehearsals conflict with my working hours. I do not get paid for these rehearsals, nor do I need the credit anymore but participate to play and because I am the only oboe here. Yet I am here and am happy to play most days.”

But the schedule can be brutal.

It’s 1:15 p.m. and a practice room door swings open and a satis ed music student walks out. Herzner quickly grabs her bag and leaves to grab the practice room, they truly are a hot commodity, and she’s been waiting for about half an hour when, finally one is open, this is prime time for practice. She is going to warm up for Philharmonic Orchestra. Many students begin to file down to Greaves Concert Hall, it’s 1:40 p.m., time for Philharmonic Orchestra. They will likely be practicing for their upcoming concert, but yet again, so is everyone else. It’s getting hectic for students because concerts are beginning, and the school load will not lighten up.