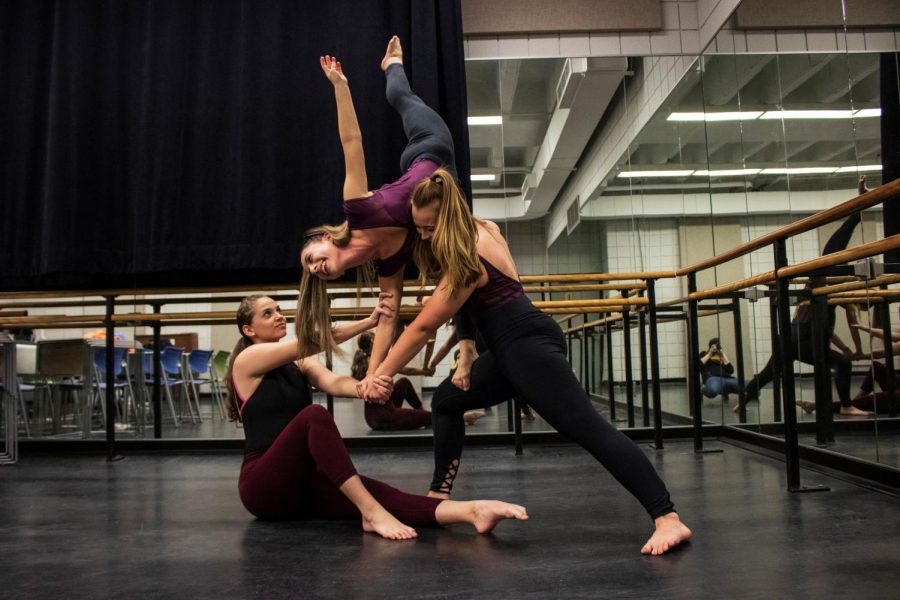 Dancers at NKU break the mold

On the second floor of the Fine Arts Center is a small dance studio with a neon green sign on the door that reads “department of theatre and dance.” The floors are all black, with mirrors and bars on every wall. Another sign above the mirrors says “please do not touch the mirrors” and “no smoking.” On the outside, the room looks empty and small. But at 7:30 p.m. on a Monday night, the room comes alive with dancers.

Backpacks, jackets, shoes and water bottles are scattered throughout the room, near the mirrors.

Some girls stand, facing the mirror to stretch; they raise their arms high above their heads, eventually twisting to the side and touching their hands to the ground. Carli Robinette, the tallest of the group, reaches up to the ceiling as far as she can, before releasing the tension and letting her arms down. She then flexes her ankles and twists them in circles. Robinette continues to stretch while discussing a possible injury her foot has endured. She unwraps the cloth bandage on her foot, relieved the swelling has gone down.

“Some of my friends think I pulled soft tissue,” Robinette says as she rewraps the bandage.

Just last year, Robinette injured her lower back while playing the role of the Sugar Plum Fairy in a production of “The Nutcracker.”

At a rehearsal, her dancing partner was supposed to hoist Robinette over his shoulder, with her back arched in the middle; he threw her too far, which caused her to hit her lower back against his shoulder. She went to the doctor after the pain wouldn’t relent and got treatment for the tightness, but she still says she deals with stiffness in her back to this day.

Robinette, a freshman theatre performance major, started dancing at a young age. She said her parents initially got her into dancing, but she eventually fell in love with it.

“My mom said after I got back from the first [dance] class that my eyes were literally lighting up and that I talked about it all week and couldn’t wait to go back next week,” Robinette said.

She enjoys jazz and tap, but her passion is ballet.

Robinette flexes her ankles some more, then stands up to do some warm-ups.

Three more girls start to stretch, while Olivia Sketch takes to the center of the room to practice her solo. Her choreographer—Sam Theders—guides her through different motions, correcting her and improving her.

Theders stands a distance behind Sketch, observing her movements, only interrupting to help adjust a certain motion.

Lexie Callaham, Brianna Mullins and Sylvia Chervus all sit in a back corner of the studio doing stretches on the floor. Mullins—short and petite with her black hair wrapped up in a tight bun on the top of her head—extends her legs far apart, reaching to touch each toe for a few seconds.

All of the girls, recommended to wear dark colors, sport black leotards with leggings. Callaham—an unintentional exception—shows up in a purple leotard that catches the eye.

The door opens and one more girl staggers in on the phone. She throws her stuff near the mirror. Not mindful of where it lands, she begins to stretch.

Four girls are stretching, two are practicing and one is sitting on a blue, plastic chair beneath an outdated TV.

“Do we turn out of this?” Sketch asks Theders, while spinning her body and stopping herself by pressing her foot against the black, matte floor.

The overhead lights turn off. As the room is illuminated by the flashlights on the girls’ phones, the tone of the rehearsal shifts. They will be incorporating the dim, small light into their dance.

“Tessellating” by Muto ft. Oliver Dibley comes on over the speaker. The sound fills the studio quickly. In sync with the beat, the girls move their bodies and their phones in a motion that mimics a heartbeat. Some of the girls have serious, stern looks upon their faces; but others are laughing, or at least trying to supress the laughter. Sketch enters for her solo, while the others surround her in a circle. She moves and glides her body in the center of the room, looking only forward. Her moves swirl and intertwine with the music, as the lights glisten and shine on her.

But then, Theders turns the room lights turn on.

“Focus on your light,” Theders says. “Move it up so it’s on Olivia.”

Theders talks with the girls about the angle their phones should be at, how to properly shine it and how they are going to create a “red effect” by covering the light on their phones with their thumbs—or their index finger, they haven’t decided yet. The room goes dark; the music plays. All the girls are in position. They rehearse again and it’s only 7:40 p.m.

This particular rehearsal was for the Emerging Choreographers Showcase—directed, choreographed and performed solely by students.

These tight-knit dancers are dancing to earn their BFAs—but technically they’re theatre performance majors with a dance track, since there is no “official” dancing degree.

Callaham began dancing when she was four years old, quitting in middle school to take up cheerleading, but returning after that.

“… there wasn’t anything else that made sense to me to do,” Callaham said.

She said she prefers studio-based dance over competitive dancing.

“I think the atmosphere was a little more competitive and I am not a competitive person. I love seeing everyone as equal,” Callaham said.

Contrary to most dancers, Callaham prefers not to be in the spotlight.

“I am not in love with performing, which is honestly a bad thing for a dancer,” Callaham said. “In one of my BFA evaluations, [the instructor] said ‘are you bored performing?’ and I was like ‘yes.’”

Callaham said she is more interested in the educational side of dance, especially learning how to use dance to benefit those with disabilities.

“Right now I’m in an independent study where I’m observing a class of kids with disabilities so they’re children with down syndrome. I’m kind of just watching how dance can improve their social skills and their motion skills—motor skills,” Callaham said.

She said she is thinking about going to grad school, but is also interested in becoming an artistic director of a dancing program. Although she’s a senior and will be graduating in the spring, Callaham said her options are still “wide open.”