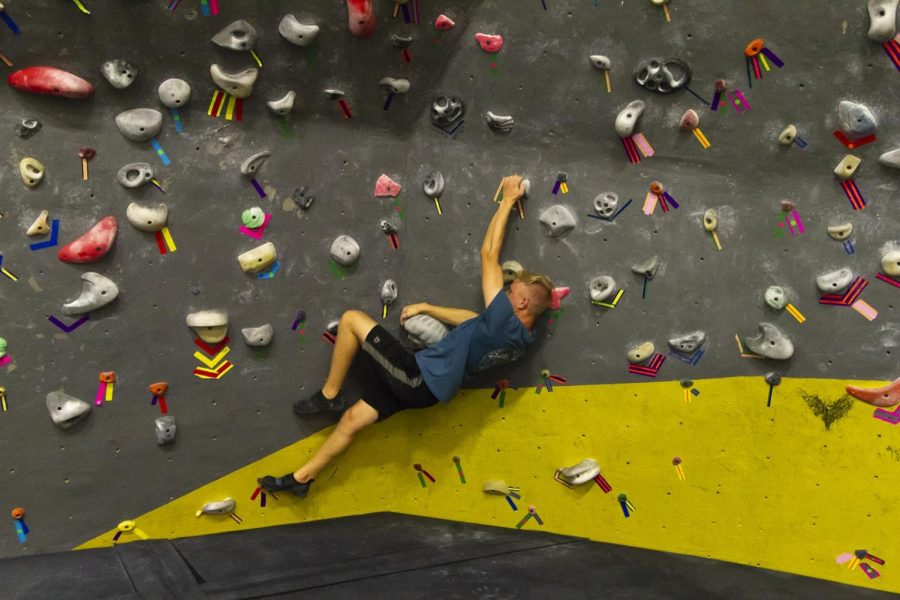 Tristan Breetz coats his hands in chalk and begins to make his ascent. Grabbing onto each ridge, hold and handle embedded in the wall, he successfully makes his way to the peak and then gracefully drops to the floor. He steps back and takes a breath before beginning another, more difficult climb to the peak.

Breetz, junior computer science major, attempts a climb up the most difficult route on the wall. He gets about two feet off the ground before losing his grip and dropping off the wall. He wearily mentions to club Vice President Josh Brunker that he “needs more chalk.” For Breetz, and most members of NKU’s climbing club, climbing is all they want to do.

“There aren’t too many people that just climb like once every other week,” Breetz said. “Basically, if you climb, it’s your main source of exercise. It’s your main outlet in life. And because of that, the people who climb are here all the time and we always see each other.”

As Breetz climbs, spectators watch with awe, and greet him with cheers each time he successfully reaches the apex. All around him, others make their climb to the top and are met with the same applause each time they attempt a climbing route.

Club members are scattered all around the Campus Recreation Center’s bouldering wall while watching others climb. Some are off to the side playing hacky sack. Others are sitting on the mat underneath the climbers, sharing memories and laughing with each other. The wall towers over them all, a monstrous vertical labyrinth of holds, ridges, handles and holes for prospective climbers to summit.

Brunker, a senior finance major, said climbing takes up all of his free time—for him, it’s “climbing, school, and work.”

He discovered the club after transferring to NKU from Thomas More University during his junior year.

“I was just trying to get into something here and I always thought, ‘Wow, climbing, that’s something that I didn’t really have the opportunity to get into,’ ‘cause it’s kinda out there, y’know,” said Brunker. “But I saw the wall, looked [the club] up, came out one night… It was awesome and I started coming like every other day.”

As other members climb, Brunker is using a toothbrush—which he later jokingly refers to as a “precision brush”—to clean chalk and grease off of the wall.

Brunker is so passionate about climbing that he got a job working specifically at the bouldering wall in the Campus Recreation Center, which he says is “perfect to get other people into the sport… it’s fun to set new [climbing] routes and just help people out.”

He assists in resetting the bouldering wall every Wednesday, and adds new routes for the climbers to keep things fresh.

Club President Danielle Augustine, junior geology major, laughs as she recalls the time that she and club member Kaylee Simmons set off their car alarm at 2 a.m. in the middle of a Tennessee campground they had traveled to for a climbing trip.

“I transferred here from [Jefferson Community & Technical College]… I started climbing six years ago,” said Augustine. “When I got here, I went out of my way to find this club.”

The climbing club often goes on trips to Red River Gorge for group activities. Several members of the club have also gone on vacation trips with other members to go climbing in exotic locations—Brunker and a few other members went to Las Vegas, where he “got really close” with the members who went on the trip.

“If you’re [climbing] outdoors, you have to have a group, you can’t just go out and do it alone,” said Breetz. “So you have to make friends who are also climbers and when that happens, you go out, you camp together for a couple days or a week or whatever. And in that you just naturally become very close with them.”

During the school year, the club hosts competition events for people to come out and try climbing, with prizes awarded to the climbers with the best score.

They also host a costume contest on Halloween. Half the proceeds from club events are donated to the Red River Gorge Climber’s Coalition, which Brunker said helps keep the Gorge safe, and takes care of the bolts, all the climbing gear, and helps preserve the environment.

As Breetz attempts his final climb of the night, he chalks his hands and hesitates before beginning to traverse a route that had troubled him earlier. As he carefully chooses when to move and how to balance his body, he makes it further up the wall. When he makes it to the top, he celebrates by hanging on to the top by one hand for several seconds as if he just slam-dunked a basketball, drops, and victoriously walks away from the wall.

“The sport definitely brings people together,” said Augustine. “We want people to enjoy it. We enjoy it. So that’s our goal. We just want everyone to love it.”

The climbing club officially meets every Tuesday and Thursday at 8 p.m.