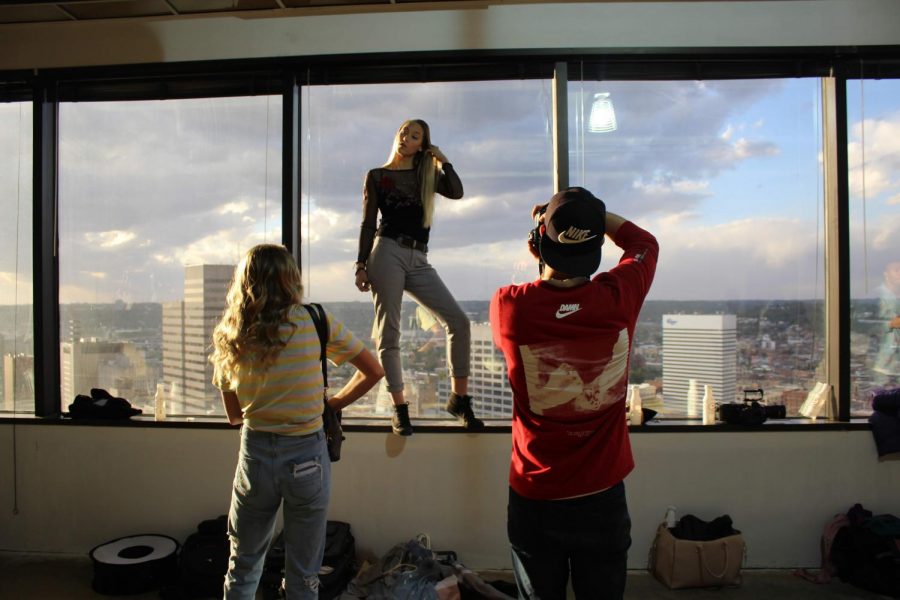 Twenty-nine floors up was another world. As photographers, models and other creators from across the community gathered for the third “We the Creators” event, the air held a playful resonance.

The 360-degree view of Cincinnati made the room feel like a bowl; a safe, secluded place for those in attendance to express themselves. The unconfined artists scattered across the unfinished concrete floors, taking photos and modeling in the miniature sets curated by the event’s coordinators.

The event, held from 4-8 p.m., was the company’s attempt at bringing creative minds together to encourage networking and interacting among artists.

Preston Saunders, owner of We the Creators and former NKU student, originally had the idea after attending a photography walk in Covington. He said while he loved the opportunity to meet like-minded creatives, the practicality was lacking. Every time the group turned a street corner, Saunders said, they lost people who branched off to take pictures on their own.

What Saunders sought out in founding this company and holding these events was to provide creators with a contained area to make art and connect.

“If we can hold people all in one space, they can’t leave unless they actually get in their car and drive away. And it’s really hard if you’re in somewhere with music and people taking pictures and you’re having fun to get up and leave,” Saunders said.

The event cost $25 to attend and hosted creators from not only the Cincinnati region, but also surrounding cities and states.

Wyatt Wheeler, NKU junior theatre major, looked at the event as an opportunity for those at different stages in their career to help one another.

“You’re finding people with just as much talent as those who are already established,” Wheeler said. “They wanted to build their own brand as well as yourself, so you’re able to trade off goods and services.”

Networking was a heavy focus of the event.

Saunders said he does most of his business through Instagram, which drew most of the people in attendance.

When artists were not taking photos or posing as models, they were buzzing around each other with their phones out, asking to connect with one another on social media.

“It’s more about going around and talking to people and building one, your personal network, but also expanding the idea that anything’s possible if you put work to it,” Saunders said.

“Far out from just a photo meet up or something, we establish this essence in the air that, whatever you want to do, go for it,” Madden said. “Make whatever art you want. Because that’s what creativity is all about. Just expressing yourself in whatever way you want.”

Pushing the limit is something Saunders is used to as a 20 year old with his own company. Saunders said he believes dreams are possible, as long as you put the necessary work into them.

“I broke 35 mirrors six times each and glued them to a wall. It took several hours. I have a lot of bad luck because of it,” Saunders said. “But a kid can walk in here and be like, wow, you’re only 20 and yeah, it’s rough sometimes, but you’re chasing your dreams.”

For Saunders, this event took three months of work to create the sets, coordinate and promote.

“I was about to lose my hair this morning. I thought I wasn’t going to make it yesterday. Super stressed, but seeing people walk around and actually interact with my stuff is worth it for me,” Saunders said.

Joey Sciarra, former NKU student, met the founders of We the Creators about a month and a half before the event and helped to set it up.

Sciarra, a photographer, also discussed his passion for creativity. He said his capturing the moment through photography is where he’s “called to be.”

“I’m starting to understand my design. I was created to be a creator, I feel like. I would be doing myself a disservice if I wasn’t trying to create,” Sciarra said. “Trying to be what I feel like I was made for, what I was called to be.