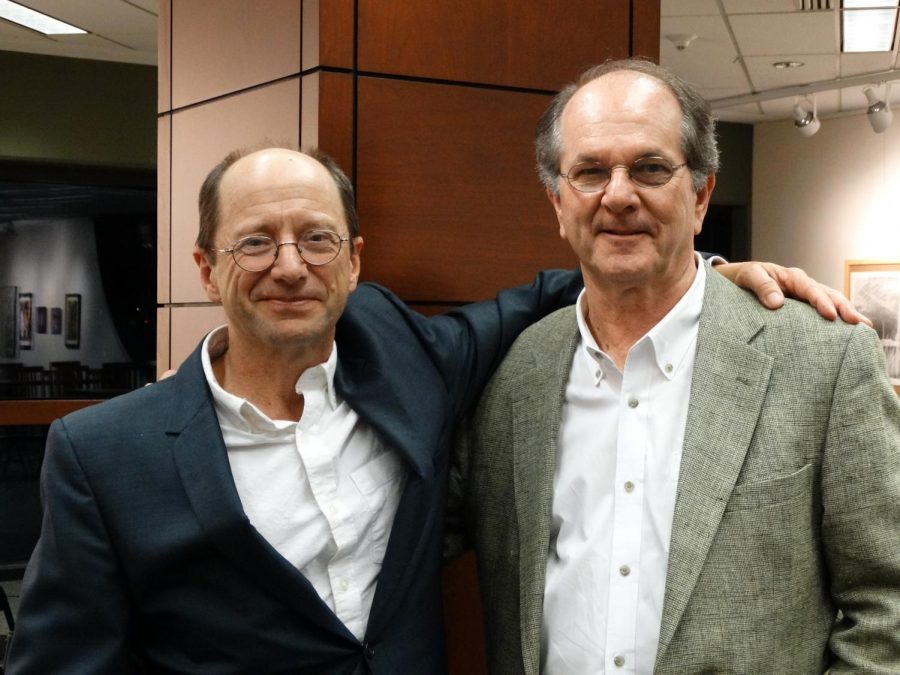 Rick Bass (L) and Ron Ellis (R) have known each other for 24 years; their relationship evolved from mentorship to friendship.

The intricacies of transporting elk meat across the Atlantic Ocean didn’t seem to cross Rick Bass’ mind when the author set out on a journey to visit his writing mentors around the world and cook for them to express his gratitude.

But as Bass entered the European Union, he trudged on with thawed elk meat in his backpack—and hoped the guards wouldn’t notice the trail of blood behind him.

“The further you travel from home, the more opportunity for adventure there is,” Bass said.

The adventure unraveled further when, in another incident, a woman at the Geneva Airport grabbed Bass’ suitcase by mistake.

“I thought it felt a little light,” Bass said. “I thought, ‘oh, heck. Security took that meat out.’ So I unzip it and open it up, and there was a woman’s prosthetic leg in there…and a six pack of adult diapers.

“And some shortbread cookies, that was it.” Despite hiccups along the way, Bass said his mentors were supportive of his project, and that everyone he visited seemed to enjoy the meal and conversation. Still, he feels he got more than he gave out of his experiences with his mentors. “They really didn’t need talking into and it surprised me. I would’ve said no if somebody asked me to participate in the project. But they said yes,” Bass said. “It was pretty brave of them, bringing strangers into their house, into their kitchen to cook. They didn’t know if they would enjoy it or not, but everybody did.” The project inspired Bass’ most recent work, “The Traveling Feast: On the Road and at the Table with My Heroes,” which Bass read from at an event in NKU’s Otto M. Budig theater on Aug. 22. Bob Wallace, NKU regents professor of English who attended the event, described a story in Bass’ book as “sensitive to the natural world at the same time that it is dealing with deep human interpersonal dynamics.” “[Bass’ writing shows] the web of connection between peoples and the places we’ve inherited…I think that kind of sums up what I feel is his amazing gift,” Wallace said. It was Bass’ third visit to NKU, made possible by his longtime friend and mentee, Ron Ellis. Ellis worked at NKU for 26 and a half years as an Assistant Vice President for Advancement from 1975 to 2001.

Ellis, who embarked on his writing journey late in his career, was inspired by these themes because of his own interest in nature.

“I just flat out loved what I read there,” Ellis said. Ellis eventually met Bass in 1994 and was later accepted into a writing program at the Environmental Science Institute at University of Montana in 1998, where Bass was the workshop leader.

“I was able to work with him as a mentor. Which is especially important considering ‘The Traveling Feast’ is about mentors and mentees. So he’s always been accessible to me. He’s always been a great guide, a trusted guide, in how things might be improved,” Ellis said. In addition to his work as an author, Bass is an environmental activist. Bass’ interest in the environment was compelling to Ellis, whose father took him on hunting trips in the wilderness as a child.

“My father gave me the first gift by taking me to these places. And I fell in love with wild places and being out there. He thought it was important to name things; he would point out things to me and tell me the names of plants and trees and animals,” Ellis said. “So that was pretty much how I began all of this.” In reflecting on fond memories with his father, Ellis mentioned a token his dad left behind after his death. As Ellis sifted through the hunting gear his father left behind for him, he found an old cigar box that bore masking tape and two words written in red ink: Keepsake Shells.

“I never knew about these shells until after his death. I opened them up and inside of each empty shotgun shell was a note that had been rolled up and put into the shell,” Ellis said. “And each of those notes were the details of a hunt that I had shot my first rabbit or I had been with him on a foggy day in the woods and killed a squirrel.” Ellis dedicated a chapter in his first book, “Cogan’s Woods,” to this discovery and thought his father would enjoy being published in a special place. In exploring relationships between mentors and mentees—a driving force in Bass’ work and highlighted through Ellis’ experience becoming a writer—Bass emphasized the importance of connecting old generations with new as a part of his journey writing “The Traveling Feast.”

As Bass trekked through his various dinners, he brought along his daughter, Lowry, his mentees and other young writers.

“When we cooked for John Berger, he was 90 that year, and Lowry was 19. That was really an amazing realization to see that span of ages at the same table,” Bass said.

Bass said he hopes his own mentees, as well as all young people, can stay passionate approaching the future and what’s to come in the world.

“Your passion is your authority. You don’t have to be an expert on free trade to know right from wrong. You don’t have to be an expert on environmental sciences to know right from wrong…one person, one vote. Not one dollar, one vote,” Bass said. “You know the sound of a lie when you hear it…if you don’t resist with passion, it will beat you down. You will accept lies. “I don’t think young people have anything to learn, they just have to survive and stay young.”

As far as mentees go, however, they don’t have to be young for Bass to take them on. Ellis, who was 49 at the start of his writing journey, feels gratitude toward Bass. He sees him not only as a mentor, but also as a friend.

“He’s always been a willing mentor to those of us who have been lucky enough to receive his mentoring…I can appreciate it from having been a mentee of his,” Ellis said. “…His mentors meant everything to him, and he just wanted to say thank you. And that’s Rick. He’s a very gracious, kind guy.”