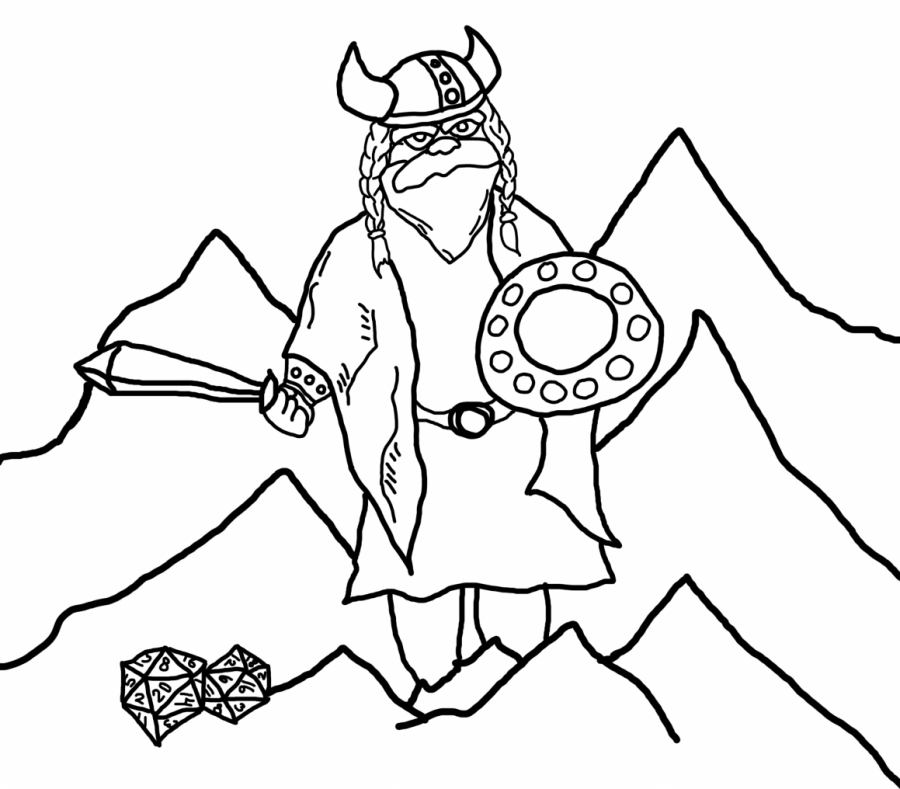 Dungeons and Dragons finds a home at NKU

You’re standing in a dungeon. You carry a sword in your right hand and a shield in your left. To your right stands a dwarf, portly and small and carrying a battle hammer. On your right is an elvish woman. She carries a bow with an arrow drawn, ready to fight. Standing in front of you is a dragon, one who isn’t happy to see a human, a dwarf and an elf interrupting his slumber. You look at your fellow warriors, and they nod towards you. You raise your sword to charge the dragon, howling a battle cry.

This is a game and not some climatic ending to a sword and sorcery TV show. It’s not your typical everyday board game like Monopoly. This is Dungeons and Dragons, and it’s been played by over 20 million people worldwide.

NKU has become a home for many fans of the game. In the fall of 2017, Norse&Dragons was formed for those interested in learning about the game or searching for other players.

“I had a small group of friends that I played with,” club president Dylan Blades said. “We talked about forming Norse&Dragons and we just went ahead and did it.”

The club wants to teach people how to play while also setting them up with potential players.

“The club’s main purpose is networking,” treasurer Travis Ryan said. “Something we hold near and dear to our hearts is introducing people to the game.”

But Norse&Dragons isn’t the only place to find adventurous students.

On Monday nights, in the lobby of Commonwealth Hall, students gather around a table as they venture through a dungeon fighting monsters. Ethan Perry is a Dungeon Master. His role is to run the game and create the story; being a DM is no easy task.

“The hardest thing for me has been story,” he said. “I can spend a day planning something out, and then my players do something I don’t expect and turn the whole story sideways.”

The DM is responsible for creating an environment that challenges players.

“I write a story for D&D the same way I write an essay,” he said. “I start with a goal, then build a story around that. I try and make the story have a conflict that I find interesting, but one my players will enjoy.”

Created by game enthusiast Gary Gygax in 1974, Dungeons and Dragons is played by three to seven people. It’s set inside a fantasy world inspired by stories such as Conan the Barbarian and “The Lord of the Rings.”

In 2017, “Wizards of the Coast,” the company that produces D&D, announced that the game had its most successful year since it was released. The rise in popularity can be credited to shows such as “Stranger Things” and “Community,” in which D&D is featured prominently. The game has developed a cult following over the years.

David Ewalt, Forbes editor and author of the book “Of Dice and Men”, has been playing D&D since the mid 1980’s.

“I think one of the main reasons people like playing D&D is because it offers a unique social experience,” Ewalt told The Northerner. “You get to hang out with your friends and also go on an adventure together. You have a common goal, work together to get past obstacles and share the ups and downs of the story.”

The game has helped inspire game designers, filmmakers, authors and helped them unlock their creativity to create and tell their own stories.

“It builds connections between people,” Ewalt said. “Most importantly, it’s fun! It’s like reading a good book or watching a movie crossed with playing a team sport.”

Dungeons & Dragons continues to bring in new players every day with stories full of countless possibilities. From saving a blacksmith’s daughter kidnapped by a horde of goblins, to uncovering the mystery behind a town’s curse— the game brings people together for a fun time.

Norse&Dragons will host meetings on Tuesdays from 5-6 p.m. in the Business Academic Center Room 110.