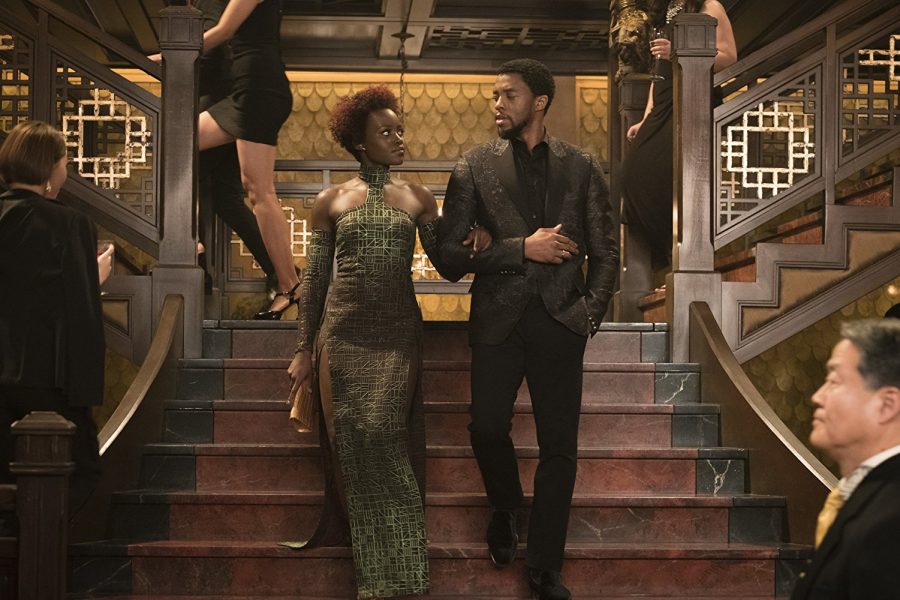 OH MY GOD. We’re only two months into 2018 and Black Panther is already the best film of the year. I was fortunate to watch the movie Thursday night before its debut and WOW. I’m still shook. I haven’t stopped talking about the movie since I’ve seen it and I don’t know if I’ll stop anytime soon.  Black Panther is a movie that everyone should experience in their lifetime.

The new Marvel film’s star-studded cast includes the likes of Angela Bassett, Chadwick Boseman, Lupita Nyong’o, Michael B. Jordan and many more of Hollywood’s elite. What I love most about the film was how black it was. Normally black people are only cast as thugs, slaves, or tokens; but in this film almost everyone in the movie was black. While many people of color in the film industry are light-skinned or of mixed race,  Black Panther was mostly a dark-skinned cast: full of melanin, looking like they smelled of cocoa butter and good credit.

In the movie, T’Challa (Chadwick Boseman), tries to figure out how to make the right decisions for his home of Wakanda, an African nation whose technological advancement is unsurpassed/ T’Challa’s sister, Shuri (Letitia Wright), is a scientist and is always making cool technology or healing people. With the help of Nakia (Lupita Nyong’o)  and Okoye (Danai Gurira), T’Challa is able to ward off any threat to their country’s vibranium, which is what Captain America’s shield is made out of. But, it’s more than that.  According to Popsugar, “vibranium absorbs vibratory and kinetic energy into itself, which strengthens its molecular bonds and makes it nearly impossible to destroy.” With those powers, it’s hard for foreigners to keep their hands off of it.

Enter a power struggle: the audience is introduced to Erik Killmonger (Michael B. Jordan),  goal is to equip every black person across the world with their own stash of vibranium so they can fight back against their oppressors. Killmonger is African-American; the film does a great job of showing the dynamic between Africans and their American counterparts.  Growing up in Oakland, Killmonger experienced the death of his father at a young age, which propelled him into a lifelong mission to be the king of Wakanda. His presence and charisma is so strong that, at times, I was even rooting for him.

As the resident music reviewer at The Northerner,  I would be remiss in my duties if I didn’t talk about the soundtrack. Several times throughout the movie I found myself dancing in my seat. With Kendrick Lamar and Top Dawg CEO Anthony Tiffith as the executive producers of the album, we were guaranteed some dope tracks. The 14- track album is complete with features from artists like Future, Khalid, 2 Chainz, SZA, The Weeknd, Travis Scott, and even  up-and-coming artists like SOB X RBE and Jorja Smith. Black Panther was lit all around.

One thing I love about Black Panther is how audiences are banding together and are collectively excited to see it. Going to see Black Panther isn’t like seeing any other movie; it’s an event. People are going dressed in their flyest outfits. I’ve seen everything from dashikis to kente cloths, even Coming to America cosplay. Black people are showing up and showing out for the film. As I was walking to the theater someone stopped me and asked if I had some lotion. I did and he said “I knew a sista would have some lotion.”The moment made my Black Panther experience more real. The film is a big moment for the  black community because we never get to see ourselves as superheroes. We hardly ever get a movie that depicts us in a positive light that doesn’t include a white savior.

The film represents a cultural moment in time for black people: its storyline, visuals, acting, and music altogether make this a standout feature. Go out and spend money on that ticket because, trust me, it is worth it. I’ve already seen the film once and plan on seeing it about 50 more times. It’s just that spectacular. Don’t miss out on the most talked about movie of the year. Oh, and remember, Wakanda Forever.