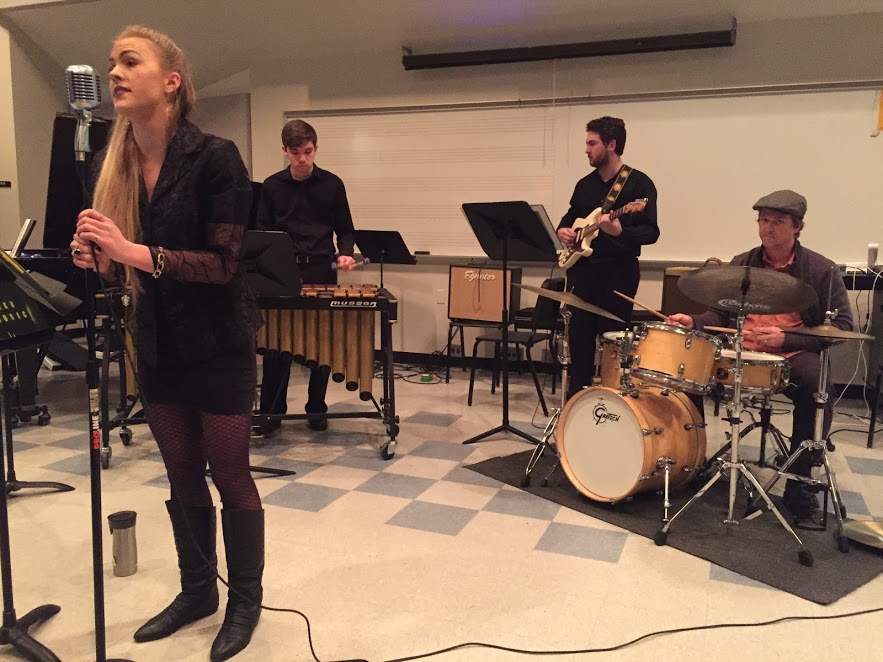 The performance, which was attended by more than 50 people, took place in the Band Room of NKU Fine Arts Center.

The show was divided into two sessions and showcased various sub-genres within jazz that originated in different locations and times throughout the 20th Century.

The first group, 1 O’Clock Combo, focused on a style known as West Coast Jazz, which developed in Los Angeles in the late 1950s.

The band included a vocalist, piano, vibes, guitar and a drummer.

Music professor Nick Fryer teaches 1 O’Clock Combo; he played leading drums during the first part of a performance. He said that West Coast jazz opposes the high-energy hustle and bustle of New York style and is sometimes referred to as ‘cool jazz.’

“Low energy. The drums are less intense. It’s kind of a nice, mellow mood,” Fryer said. “There is a real emphasis on the arrangements. The arrangements are sometimes very intricate.”

The second group—11 O’Clock Combo—focused on Straight-ahead Jazz that developed around the 1970s and is  often referred to as smooth jazz.

John Zappa, an NKU adjunct jazz trumpet professor, teaches 11 O’Clock Combo and played leading drums during the second part of a performance. He said that his class played what most jazz musicians or listeners call Straight-ahead Jazz; however, students are more so exploring the different styles and have not clearly defined their own yet.

“There are a lot of stylistic entities and there are lots of different levels,” he said. “We’ve got guys who are playing professionally and guys who are just starting to learn. It’s very mixed up stylistically.”

Zappa teaches music at NKU, as well as at the University of Cincinnati College-Conservatory of Music (CCM).

According to music-schools.startclass.com, CCM ranks in 20th place in  music colleges nationwide, whereas SOTA currently has no ranking. However, Zappa believes that SOTA could reach this level of acclaim.

“As with any program at this school, it just needs support. We need funding, we need facilities,” Zappa said. “We, as far as the specific jazz program goes, don’t have the type of physical facilities.”

Sophomore music technology major and 1 O’Clock Combo pianist Charlie Lefkovitz has played music since he was eight years old. He said that, for him, jazz is a tradition that is created by many disparate people who have come together to create this music.

“Jazz has always kept with a time,” Lefkovitz said. “It always reinvents itself.”

The names of both groups refer to the time slots of a “Jazz Combo” class that performing students attend on Mondays, Wednesday, and Fridays throughout the semester.

“It’s one of the most important classes as the jazz major,” Fryer said. “It gives these guys (students) an opportunity to play three times a week.”

Students also get an opportunity to perform and practice in front of the audience twice a semester.

The next jazz performance will take place in Fine Arts Building  March 1 at 7 p.m.

All upcoming event dates and information can be found on the official SOTA School Of The Arts web page.