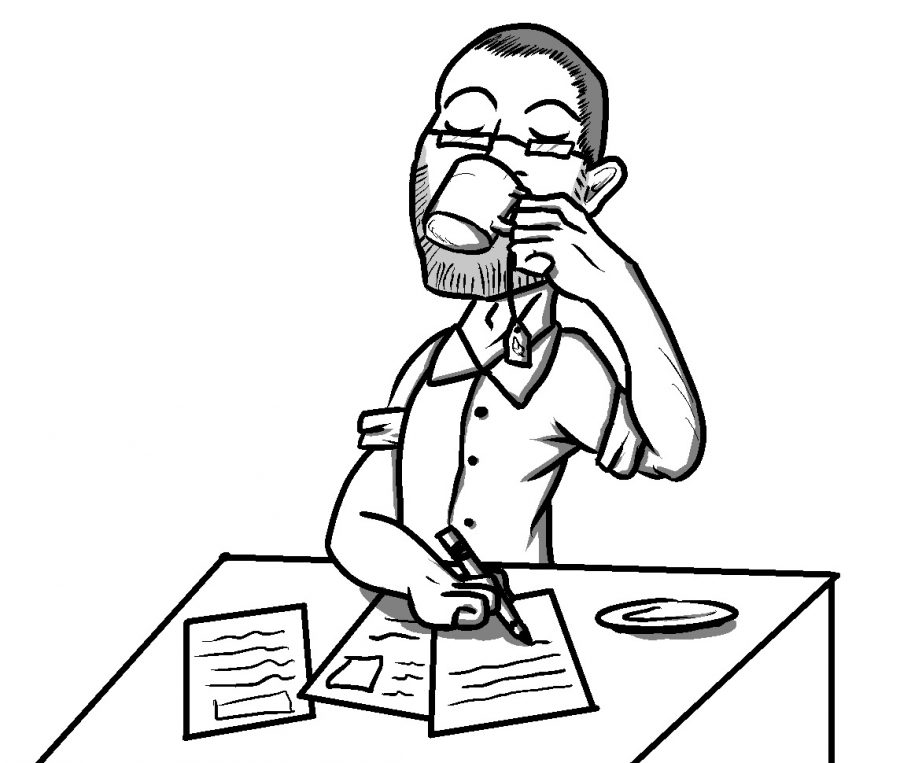 Kellogg at his desk, as imagined by our cartoonist.

Kellogg has worked for Gannett Company, The Enquirer’s publisher, for the past 14 years. An internship with the Community Press and Recorder that he juggled with his duties as editor-in-chief of The Northerner opened a door into the world of professional journalism.

Four years ago, when Gannett underwent a reorganization, Kellogg was promoted to Consumer Experience Director, a position that he says challenges him to put his paper’s readers first and foremost.

This constant stream of data is one of the most important tools in his arsenal. From the moment Kellogg steps into the office to close, he’s keeping a close eye on which stories are garnering traffic.

“It’s a constant process,” he said. “It’s one of those things that feels as if it’s never done, which can be good.”

Kellogg’s day begins with a 7 a.m. phone call, during which he and a group of the paper’s staff share their research into Google trends, social media buzz and the actions of competitors.

“Recently we’ve been trying to focus on specific audience segments,” he said. “There’s a segment that’s based around families—not just your typical parenting stuff, but what those people are also into. We look at them and ask ‘what kinds of publications are they reading?’ and find out if we’re reading those. I’ve been spending some time reading stuff now that’s not necessarily market to me.”

Using this information, he’s able to dig into his main directorial duty: producing content for the Enquirer’s website. To keep readers engaged, this process goes beyond writing. Video, social media and photo selection come into play when crafting each story.

Kellogg’s responsibilities as director signify the drastic changes journalism has faced since the dawn of the digital age. According to a study conducted by the Pew Research Center, 67 percent of adults in the U.S. get their news from social media, as opposed to the 18 percent who read print newspapers.

The ease of access and instant gratification the internet allows its readers means that news outlets must provide a steady-stream of coverage on Facebook and Twitter, putting a special emphasis on video.

“When I first started at the Community Press and Recorder, the print edition would come out every Thursday,” Kellogg said. “So, every Thursday, we would drop all of our stories onto the website, and wouldn’t change them until the next week. It’s weird to even say that today, but that was where the company was at that particular time.”

Now, updating The Enquirer’s site is a minute-by-minute process, he said.

“We’re posting stories that are one sentence long to get the information out. There are times where all we have to do is write a headline, and we send push alerts to our app without stories.”

Kellogg’s advice for those who want to adapt to new mediums of communication: care deeply about your job without becoming attached to methods by which you do it.

When Kellogg enrolled at NKU in 1998, he wasn’t sure what he wanted to do post-graduation. He was interested in writing, but didn’t have much of an interest in going into teaching.

“I started to look around in a very practical way: how do I make money?,” he said, followed by his answer: “As a journalist.”

He liked the idea of being able to venture out into the world, meeting people one on one and performing a public service.

The pursuit of journalism led Kellogg to The Northerner, where he eventually climbed to the position of editor-in-chief.

Though it might not have been the biggest story he worked on during his editorial tenure, he’s most proud of his coverage of a debate between former speaker of the U.S. House of Representatives Newt Gingrich and former Bill Clinton consultant James Carville.

“I felt like at that point we did a really good job,” he said. “We had a good preview story, we had a cartoonist that did these really cool illustrations of them as boxers facing off, I covered the press conference beforehand. I remember feeling like that was one time when we were all clicking as a group.”

Kellogg said that the biggest benefit to working for a campus publication like The Northerner is that it gives students the opportunity to take ownership over their work, citing the responsibilities its small staff must handle: