On and off court, SHEP student finds home in Rec Center 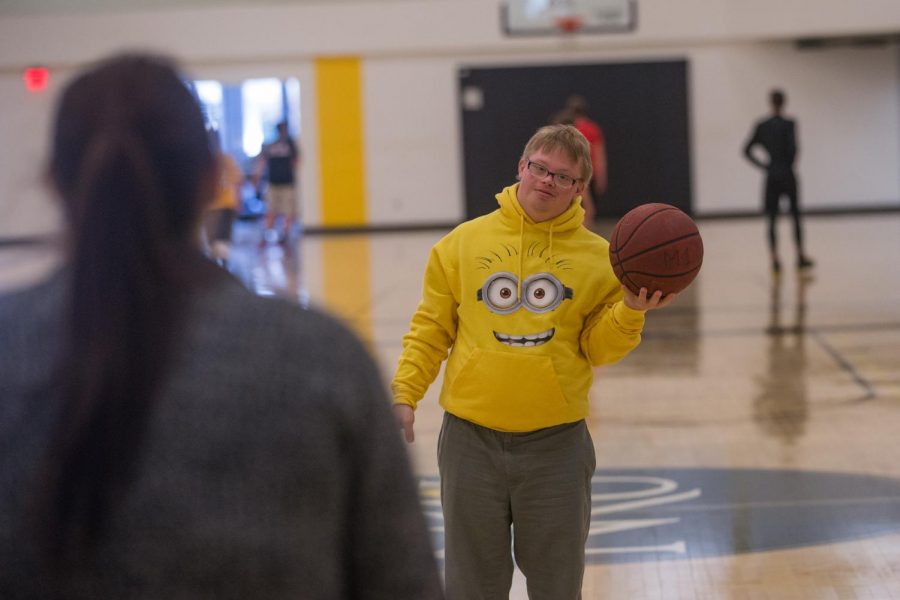 Brown and Dempsey bond over basketball.

Tennis shoes squeak on hardwood floors, basketballs berate backboards and rims, voices stumble over one another and high-tempo music plays in the background converging to create a cacophony of echoes throughout the NKU Rec center. A sandy haired 22-year-old with rectangular glasses, a rosy complexion and a faded superman t-shirt chases after a basketball with a grin spread wide across his face.

On just about any given day, this is where you can find Patrick Dempsey and his mentor, Olivia Brown. Dempsey, who likes to be called Pat for short, works at the campus rec center scanning students’ AllCards and logging which equipment has been checked out or turned in. On his off days, Dempsey still enjoys spending his time at the Rec shooting basketball.

Dempsey is a part of NKU’s Supported Higher Education Project (SHEP), which provides students with intellectual disabilities a chance to participate in and experience collegiate life.

It’s because of the SHEP program that Dempsey is able to take classes at NKU and work at the Rec center. Brown is a double major in elementary education and special education, the latter of which introduced her to SHEP and then to Dempsey.

Brown wears a similarly faded t-shirt, only hers is adorned with the batman symbol. She demonstrates a game she used to play with her friends by bouncing the basketball, then clapping as many times as she could before catching it on its way back down. Pat excitedly follows suit but bounces the ball too far out in front of him and ends up having to chase it down.

They play around on the court for a little while longer, until Dempsey decides he’s ready to go home. Brown agrees, knowing that they’ve spent over an hour there and will have to come back tomorrow for his work.

During Dempsey’s shift, Brown stands behind the grey equipment issue desk behind him. With a patient smile, she absentmindedly shrugs. Dempsey is looking at her out of the corner of his eye with one eyebrow raised, silently questioning her. He looks back to the computer screen, moves the mouse over slightly and then shoots Brown the same look.

“What did he get?” Brown asks.

Dempsey adjusts the mouse one more time and looks back at Olivia. She nods slightly, and offers him a fist bump accompanied by, “Good job.”

For Brown, it’s a balancing act. She wants to help Dempsey out, but she knows that she has to be aware of when he actually needs help versus when he really knows what to do.

Brown’s oldest sister was also born with an intellectual disability, so she knows how to strike that balance. She’s been working with Dempsey for just over a year now, which has given her time to get to know his specific nuances fairly well.

Beyond getting to know Dempsey over the past year, Brown has become quite close with his family as well. Her relationship with Brown has been beneficial enough that his parents have recently signed Brown on to work with him on a regular basis, which means her job is to help him work toward his individual goals, like learning money management and improving social interactions.

This also means that Brown was assigned another student mentor through the SHEP program. Travis Roy began working with him at the beginning of the semester and they’re still building their relationship. The two spend time together while Brown is in class, by getting lunch and, of course, going to the Rec center to shoot hoops.

The usual sounds of the Rec center fill the air as Roy challenges Dempsey to make ten shots in a row. He accepts and immediately begins to shoot.

Dempsey groans in frustration as he misses two consecutive attempts. Roy retrieves the ball, passes it back and offers a few words of encouragement. Dempsey dribbles the ball briefly, tosses it up and smiles as it passes through the net.

With a flushed face, Dempsey takes a seat on the court. Roy offers to grab him water as he rests. After a few gulps, Dempsey is ready to take the court again.

A little while later, Olivia walks into the rec and makes her way to the court where they are playing. It takes Dempsey a second to realize that she’s arrived. Brown is only a few yards away when he finally sees her, and a smile instantly appears on his face. Dempsey quickly closes the space between them and embraces Brown in a giant hug.

It’s apparent that with her arrival his mood shifts: He becomes more talkative and begins goofing around with Brown. He sneaks behind her and puts his hands up to give her antlers, which makes them all laugh. He exclaims, “Patrick is funny!” to which Brown gladly agrees.

As Roy tells Dempsey that he has to head to class, they exchange a handshake. Brown and Dempsey resume their shenanigans on the court.

Soon after, he says, “Olivia, I wanna go home.”

“Can we stay for 15 more minutes?” Brown counters.

Dempsey somewhat reluctantly agrees, but ends up happily shooting basketball for another half hour before he asks again. This time she agrees, so they grab their belongings and make their way to the exit, knowing it’ll only be a matter of time before they return to the NKU Rec center.