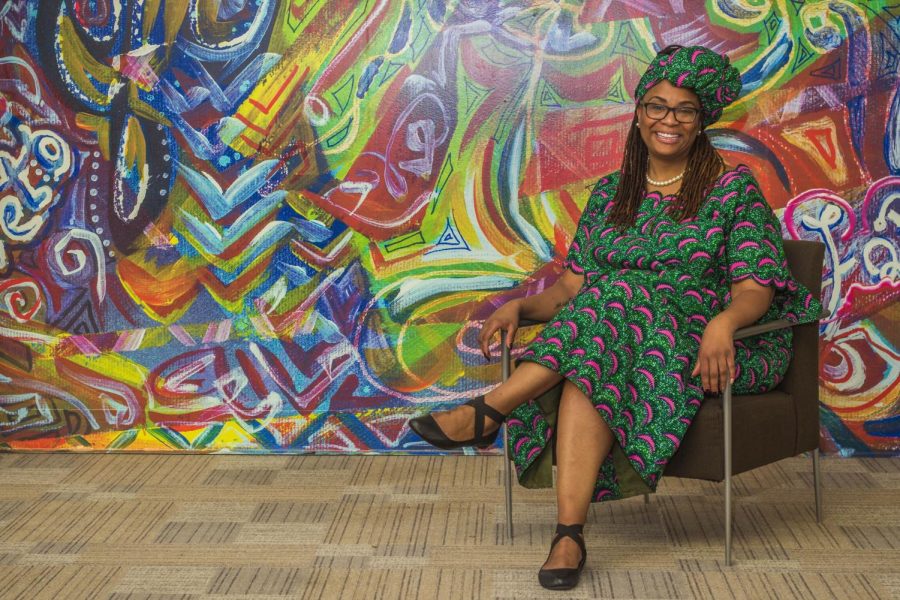 Tracy Stokes, the director of African-American programs and services, is there to advise student not only in academia, but in their personal lives as well.

Six years later, director of AAP&S as dedicated as ever

Tracy Stokes took the position of director of African-American programs and services six years ago. At her core, she look toward serving her students.

A student comes buzzing out as the next bombards the entrance for a meeting. “Are you busy?” Out of breath, she sets her backpack on the floor and closes the door. One student claims her attention as others crowd around, waiting. For a majority of first-year students, Tracy Stokes is their first personal resource on campus. They ask her questions ranging from advising to more personal matters; she’s there to make sure they have the resources they need.

Before NKU, Stokes lived in Dayton, Ohio, her hometown, where she worked as an advisor for Wright State University. Here, her identity felt comfortable. Dayton was where she had family, friends and a job that fit into her pedagogy. She thought she would never leave Ohio for Kentucky. After receiving an email from a former classmate about the position at NKU, she decided that she could help Black and Brown students feel the comfort she felt in Dayton.

“I saw this job and thought, ‘How cool would it be for me to affect the lives of Black students in the same way I help majority students?’” Stokes said.

Stokes found herself applying for the position, taking what she succeeded in doing at her former workplace and utilizing it with African-American Student Affairs, now called African American Programs and Services.

Before Stokes arrived, AAP&S lacked an academic advising method to serve students. She was ready to provide what she loved doing to a more niche selection of students.

“I thought this position would be a good fusion of my experience in advising and what [AAP&S] needed and I got the job,”she said.

Ecstatic about landing the position in an accepting office environment, Stokes was ready to make the move to Kentucky to serve NKU students. Coming to a predominantly white institution (PWI), she focused on ways to expand the program in a place where most do not recognize various African- American ideals and experiences.

“I am in a cool place where I can help people who look like me,” Stokes said.

Stokes gathered her children and relocated to Florence, Kentucky after landing her new career at NKU.

A crisis of identity immediately struck Stokes as she came to the realization of something she had never experienced in her hometown.

“[Moving to Kentucky] was the first time I felt Black,” Stokes said.

Among the NKU population, Stokes expressed thoughts of feeling small, voiceless, underrepresented and just another stereotype among the majority.

Stokes realized that she was ready to be the voice for the marginalized if need be. She eloquently took the challenge of identity and used it to help students with the same feelings. By this, she created an open space.

“When I came we were in the process of rebranding, we wanted to change the view of the office,” Stokes said.

Stokes faced opposition with programming and reconstruction of the program among student and faculty at NKU.

At the start, the opposition within the student body worried her the most. Students, who had rejected the program after the loss of the coordinator whom Stokes succeeded, were not actively participating or advocating for events and causes offered on campus by AAP&S.

“Students weren’t trying to hear what we wanted to offer them, the office had a bad reputation of exclusiveness,” Stokes said.

This attitude towards the AAP&S office reflected the campus diversity rates with low rates of African-American enrollment and retention.

In 2013, NKU began its official plan for improving inclusive excellence on campus. The 2013-18 Strategic Plan for Northern Kentucky University states that it identifies inclusiveness as a core value and highlights the critical role inclusive excellence (diversity, equity, and inclusion) plays in achieving institutional excellence.

Stokes has made students her first priority: she wants to make sure that they not only feel comfortable, but are excelling and using their voice to get access to what they need.

“As people of color, people think that if we are oppressed and marginalized, we don’t have a voice or we don’t have one that’s intellectual or have something to say, so I had to begin to change that narrative,” Stokes said.

In fall of 2013 Mariah Manson, a fresh face to NKU’s community, unpacked her things to settle in her new home. For freshmen, NKU may seem unfamiliar and uncomfortable. Manson’s first experience feeling a part of the community was through NKU R.O.C.K.S, an orientation program for African-American students. She recalled the murmur of chatter as hip-hop music played in the distance of the science center when she walked up to meet who would be her mentor through graduation.

“She pushed, she challenged me, she stood by me and she valued my input. It amazed me how she would ask what I thought about certain things. She was very loving like a mother away from home,” Manson said.

“I was shocked because she wasn’t someone who I even thought liked me like that!” Stokes said.

Stokes realized that her genuine personality and consistency sticks with some students to help them succeed.

“For her to say what she learned from me as a first-year student stuck with her to graduation made me realize what I say does have an impact,” Stokes said.

Stokes began to feel a breakthrough in the student involvement on campus.