Kremer: 'I said when I came here, I had 500 new grandchildren' 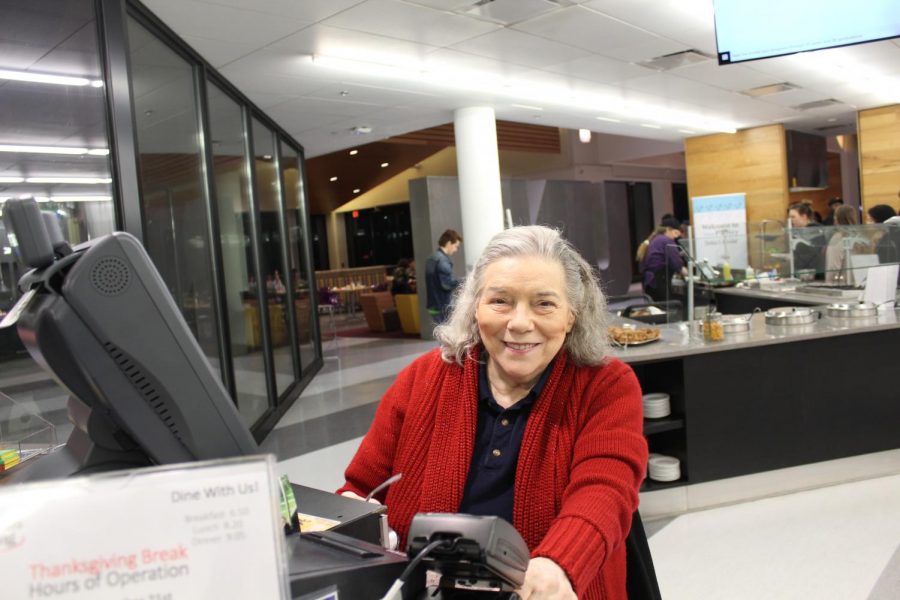 A fixture at NKU’s on-campus residential cafeteria, Mary Pat Kremer sits at the Norse Commons register; a single bobby pin holds back her gray locks and a red cardigan complements her work uniform. She invites students in for dinner, asking each individual how they’re doing with a look of genuine concern.

A “campus celebrity” of sorts, the students hold her in high regard for her sweet smile, warm-hearted voice and renowned ability to remember the name of every student who passes through. (Her secret? A quick, but sly peek at your AllCard.)

While she’s only worked at Norse Commons since 2010, Kremer said she has been in the service industry for 50 years; her first job was as a server at Crystal Chili Parlor in Newport.

Formerly working with elderly clientele, Kremer said she was nervous when she first came to NKU because she wasn’t sure how to address a younger crowd.

“I started thinking about the freshmen first. And I thought, ‘How would I want somebody to treat my child if he was a freshman and away from home?’ So I took that into thought, and it worked out good,” Kremer said.

Alexander Christmon, a sophomore worker at Norse Commons, said he likes the friendliness and hospitality Kremer shows for everyone.

“She always just walks in and says hello and just shows that gratitude for everyone,” Christmon said. “She’s just a really nice girl.

“I love her, I love Mary Pat. I always give her hugs.”

Christmon also said that it’s the things she does on a day-to-day basis that make her stand out. One fond memory that made him crack up on the spot: Kremer told his coworker to “hush [his] mouth” after he used the expletive “damn.”

“She had a spoon and was like, ‘don’t say that word again.’ So that just made me laugh and I was laughing about that the whole night,” Christmon said.

Christmon is not the only coworker whose life has been touched by Kremer, however. Another student worker, sophomore Hannah Wilson, remembered a birthday gift Kremer once gave her.

“Throughout the beginning of the year, whenever she didn’t eat her clementines, she would give them to me because she wanted them to have a home, I guess,” Wilson said. “So then on my birthday she bought me a big bag of Cuties, and that just made me so happy that she remembered that I liked eating her clementines.”

Not only did Kremer give Wilson clementines, she said Kremer once gave up her coat because she had forgotten to bring hers to work.

“She was so worried about me that she gave me hers,” Wilson said, “because that’s just the kind of person that Mary Pat is. She’s a blessing.”

In addition to the current students that Kremer impacts on campus, she also said she gets frequent visits from alumni.

“One came back with her baby,” Kremer said. “Those are pretty cool things. They get you in the heart. It just makes me feel all warm that you guys like me.

“I said when I came here, I had 500 new grandchildren. Some of them for a while would call me grandma, it’s just the way it is. It’s a fun job.”

When asked what her advice to the students would be, Kremer passed along wisdom she said she’s given to her own children and grandchildren.

“Come and see me more often. As long as we’re together, we’re going to be happy. Do the best you can do, because it’s going to be okay. And always remember that your feet are on frontwards. God did that so you can keep on going,” Kremer said. “…You’ll get out of school and you’ll run into some trouble and you’ll think, ‘I’ll get through this, because my feet are on frontwards.’ Pretty good thing to think, isn’t it?”