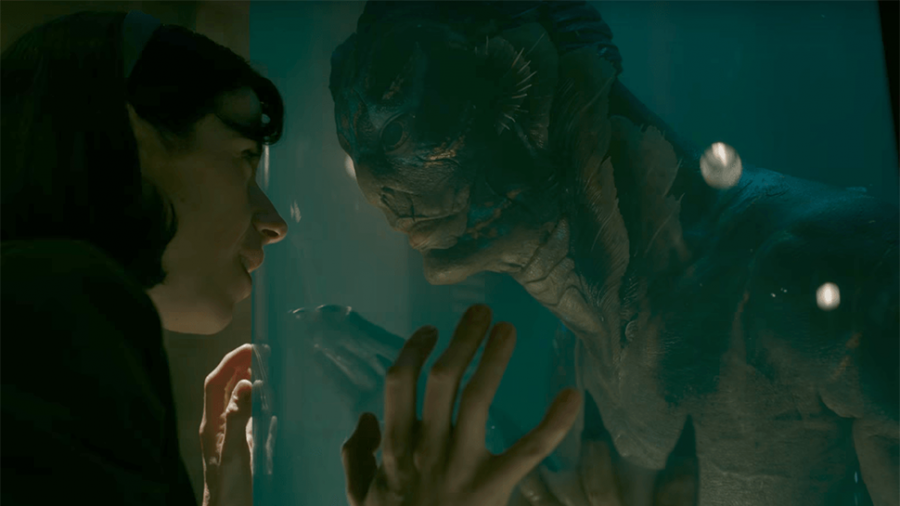 The medicinal-pale exterior of a new 1963 Cadillac Coupe de Ville.

The shade of twenty half-eaten key lime pie slices, stored in a refrigerator.

The Jell-O wiggling at the focal point of a Norman Rockwell-esque painting.

And the reptilian skin of The Shape of Water’s aquatic love interest: the proverbial Beast to protagonist Elisa Esposito’s (Sally Hawkins) Beauty.

According to many of the characters that populate Guillermo del Toro’s tenth directorial effort, The Shape of Water, it’s been the color of the future ever since Sputnik launched. Saturating the film’s Cold War-era set designs with its radioactive glow, the hue serves more as a harbinger of doom than a beacon of progress.

As The Shape of Water’s central story arc–the tragic romance between Esposito, a mute janitor at a U.S. aerospace research facility and a humanoid sea monster shipped in from South America–unfolds, the lives of its supporting cast fall victim to the forward march of scientific and cultural advancement. Esposito’s anxious roommate Giles loses business as a commercial artist to advertiser’s demands for photography. A Soviet scientist, sent to work at the facility as a spy, puts his mission in jeopardy due to his compassionate nature.

The aesthetics are cozy; the characters are quirky. But they’re too soft to avoid being crushed by the burgeoning consumerism of a post-industrial society. The Shape of Water is a compressed gelatin mold worth of fragmented ideas and sub-plots, reflecting the mindset of a country nearing an identity crisis: it’s a film that isn’t sure whether it’s a cosmic horror flick, a comedy, a romance, a fun little caper or a espionage adventure.

At its best, the film peels back its action to dissect the world that bustles in the background, allowing us to float in its immersive surrealism. The opening scene achieves this well: it opens with a shot of furniture floating in the murky blue-green confines of a flooded apartment. We’re then able to peek into the mundane, but aesthetically gorgeous rituals that Esposito performs before clocking in at work: boiling eggs in a transparent pot (one that’s currently available in MOMA’s latest gift catalogue), dodging the talkative owner of the movie theater she rents space above and sitting at the bus stop next to a sad man bearing birthday cake.

As if to make up for the silent protagonist’s lack of dialogue, we’re treated to an always-moving zoetrope of visual gags that makes me feel like I’m walking through a video game’s central hub for the first time, interacting with its virtual inhabitants and locales.

To be honest, though, it’d be a Wes Anderson flick with an inverted color palette without the sea monster (which I don’t intend to be an insult). Played by frequent del Toro collaborator Doug Jones, the beast moves with a grotesque grace that makes its romance with Esposito believable. Whether chained to the floor of a research facility’s storage unit or reclining in a repurposed bathtub, the Amphibious Man is torn between his animal instincts and emotional Id. It slaughters housecats; it swoons crackling Jazz LPs. It severs fingers; it tugs on heartstrings. By the time it exits stage right, you’ll feel charmed yet profoundly uncomfortable.

The film ends how it begins: suspended in water. As Esposito and the creature embrace in the green glow of the ocean, Giles’ disembodied voice recites a poem: “Unable to perceive the shape of You, I find You all around me. Your presence fills my eyes with Your love, It humbles my heart, For You are everywhere.”

Though he doesn’t remember exactly where the verse came from, del Toro remembers reading it in a book of Islamic poetry, found in a bookstore he’d frequent before going on set to film. It’s a fitting conclusion to a movie that speaks more through its lyrical use of color and imagery more than a concrete plot: The Shape of Water’s story exists in the aqueous spaces between its characters and plotlines, caulking the cracks between its puzzle of plot devices and quirky asides.

The Shape of Water will be widely released on Dec. 8.