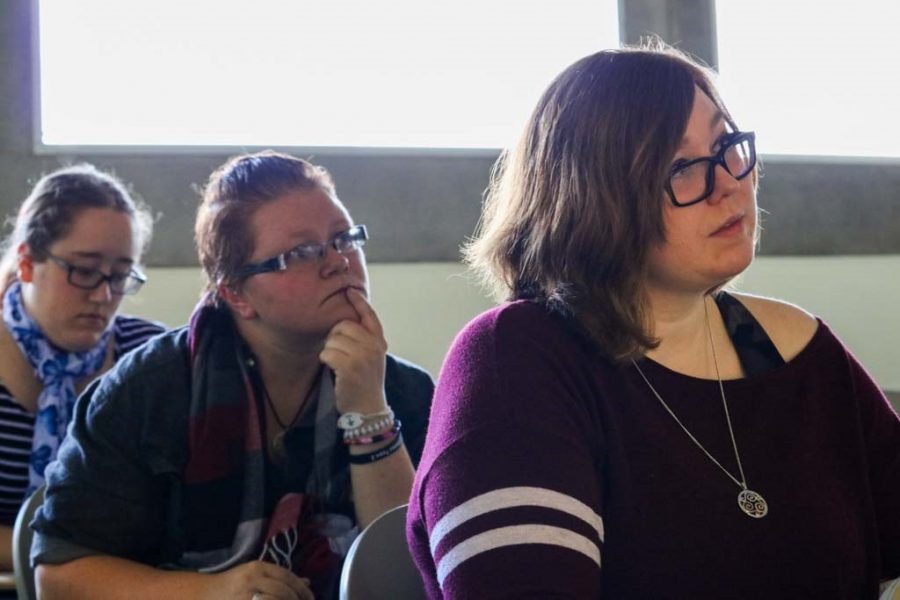 Students gathered for the first Pagan Student Association meeting. Some followed the principles, others came out of interest.

Upon entering the first meeting of the Pagan Student Association, nothing would feel out of the ordinary. The gathering, held in Landrum Hall, looked like any 4 p.m. class. As people shuffled into the room, they were immediately greeted with a smile and a place to sit.

In this, the first goal of the Pagan Student Association (PSA) was met: creating a friendly space that welcomes all. Founder Sven Cantrill reiterated this, saying that the club was open to everyone.

The meeting of roughly 10 members commenced with a brief overview of what Paganism actually is: a term that historically refers to religious practices outside of the main world religions: Christianity, Judaism and Islam.

The PSA itself emphasizes Neo-Paganism, the tradition’s modern equivalent, which includes more recent Pagan religions such as Wicca. Neo-Paganism is an umbrella term, however, and includes codified practices like Wiccan witchcraft, polytheism, as well as simply worshipping the natural world.

The variation in Neo-Paganist practice is reflected in its members. Iain Applebee, a junior political science major, has a well-established spiritual background and joined the club to network with other Pagans.

Although Applebee was raised Catholic, he said he eventually fell out of the religion. While reading a book of ancient world religions, he landed on a book about the Greek god Dionysus.

“I read that central to his worship was the idea of him coming back from somewhere described as beyond what is known and civilized and rational. So that got me looking into [Dionysus] more,” Applebee said. “He inspired Friedrich Nietzsche, a German philosopher, who really codified this idea of utter irrationality contrasted with a different Greek god, Apollo, which is reason, thought, logic and it made a lot of sense to me.”

I just found my way to kind of like a spiritualistic kind of existence. I’m not sure what to label myself at this point, but that’s the reason why I’m here.”

Others like Za Jordan and Phyla Alderette have no established religion and came to learn more about different spiritual practices. Jordan, a junior English major, said their interest came from being around their roommate, who is a practicing Wiccan.

“It’s always something that’s very interesting to me, just from being around them,” Jordan said.

“I’ve always kind of experienced weird happenings in my life that no other religion has really explained fully,” Alderette said. “I just found my way to kind of like a spiritualistic kind of existence. I’m not sure what to label myself at this point, but that’s the reason why I’m here.”

Founder Cantrill said he aims to create an organization which brings these eclectic schools of thought together.

“That’s another thing I think I’d really like to see for this club, people that are questioning their spiritualities,” Cantrill said. “I want to… offer them a place where they can come and explore who they are, and ask questions of other people, and just be accepted.”

Cantrill said he wants the group to grow naturally in the direction the members wish.

These chosen faiths, concrete worship toward a god or gods or the ambiguous veneration of the natural world, can sometimes be misunderstood and stigmatized.

“I think that most people are more ignorant rather than hateful about certain things, so I do think it is important to try to teach others,” Jordan said. “At the end of the day, I think everyone deserves a voice, especially people who may be affiliated with certain religions or anything that’s going to be marginalized. In general, I think that people deserve to have their voices heard and be understood.”

Understanding and perspective are key to religious tolerance, Alderette agreed.

“I feel like we should build our religions as bridges to help connect each other, rather than walls to separate us, which I feel like a lot of people unfortunately do,” Alderette said. “If we learn how to learn from others people’s’ perspectives and take that to heart, I think that everything will work out okay.”

On the topic of naysayers, Applebee reiterated that his beliefs are his own, and he invites those curious about their spiritual existence to consider all paths.

“This is what I believe and I’m not going to hide that away,” Applebee said. “[those curious about Neo-Paganism] are not alone. I think the history of America and the western world at large has been dominated by Christianity, and with no animosity towards Christians, I would like to just state that there are other forms of thought that you can practice your religion.”

The first meeting was a success, Cantrill said he thought; the turnout was better than he expected.

He said anyone interested in any form of religion outside the norm should consider attending.

“We have an open-door policy,” Cantrill said. “No matter who you are, what you believe, we invite you to come on down and maybe you can learn a little something.”

The Pagan Student Association meets on the second Thursday of every month at 4 p.m. in LA 207.