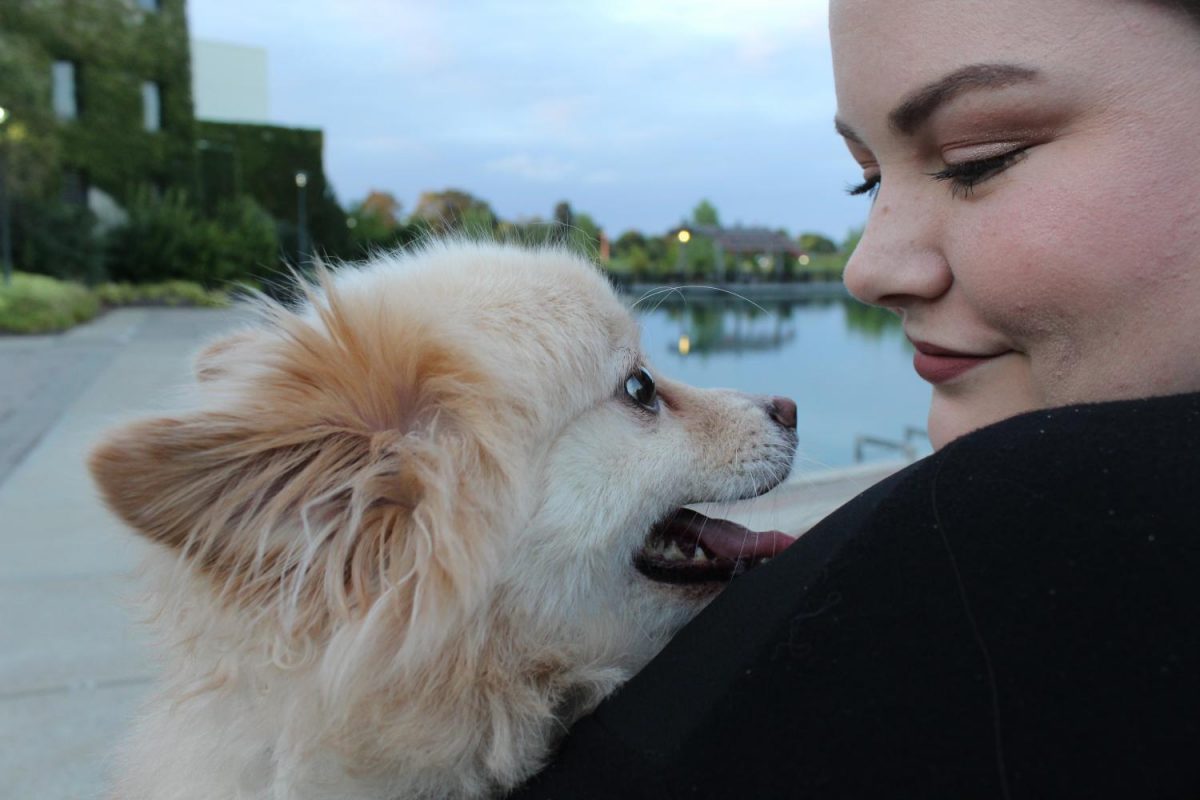 Emotional Support Animals: Furry friends that are more than companions

Laura Bosse, an NKU nursing student, sat on a bench adjacent to Loch Norse. Though her gaze was fixated on the water, a caramel-cream colored Pomeranian named Foxy only found concern in watching her owner.

Foxy–who came into Bosse’s life as a foster dog–is an emotional support animal (ESA), which means she helps Bosse through symptoms of depression and anxiety.

Foxy came to her by happenstance when Bosse’s mother volunteered for a local nonprofit animal rescue. Her mother sent her a photo of Foxy, who happened to be at the rescue that day.

“My mom had the idea that we would foster her,” Bosse said. “And in my mind I knew that I was not planning on giving her back.”

Courtney Castle, a former NKU student found her therapy animal, Oliver, after a friend suggested the idea to her. She struggles with anxiety, which was magnified by attending college far from home.

“I decided on getting a therapy dog because I was having a hard time dealing with my anxiety and depression to the point it was affecting my academic performance,” Castle said. “I didn’t want to go home but being two hours away from everyone I knew was very hard.”

Castle talked with her doctor about the idea of an ESA, and they agreed it would be beneficial.

For Bosse, these benefits come in the form of Foxy helping her sort through panic attacks, sometimes sensing them before they propagate.

“[Foxy] is a grounding mechanism. She’s something that I can see, hear, and touch so she…brings me down from it and sometimes can keep me from going into [panic attacks] altogether,” Bosse said.

According to Castle, Oliver calms her anxiety tremendously but also had another effect: helping her socially by forcing her to step outside her comfort zone.

“I interacted with people and made friends I wouldn’t have otherwise,” Castle said.

The American with Disabilities Act guide to service and emotional service animals stated that though ESAs or comfort animals are often part of a medical treatment as therapy animals “they are not considered service animals under the ADA.”

Though the ADA says that they aren’t covered by federal laws–like service animals are–support animals can provide both companionship and relief from symptoms of loneliness, depression, anxiety, and types of phobias.

Emotional support animals are not the same as service animals, like those who assist the blind, deaf or are certified to detect the onset of psychiatric episodes. Because of this, they are not allowed where normal pets wouldn’t be, like grocery stores or classrooms. ESAs are still there for a job, however, which can be confusing to some.

Castle said she has had issues with people assuming Oliver, being a support animal and not a dedicated service dog, was free to be played with.

“People think because he is a therapy dog and not a seeing or hearing dog he is there for everyone’s emotional support, and it is okay to pet him,” Castle said. “I always have people come up and pet him without asking or try to play with him.”

Castle said that while Oliver is playful and cute, he is still here to do a job, and needs to focus. Eventually, it got bad enough that Castle sent Oliver back to her parents.

“I had some people I faced while living on campus get very angry when I would not let them play with Oliver,” Castle said.

Other issues some have are the lack of requirements for becoming a therapy animal. For an animal to become an ESA, the owner must have a letter from their psychologist that states an ESA would be beneficial. Some consider this too little a qualification and would like to see more requirements. Bosse, however, disagrees.

“It shouldn’t be a set of requirements from each animal because all of them are different and each patient has different needs,” Bosse said.

Another problem regarding the certification of emotional support dogs is that the animals themselves sometimes are not considered when the psychologist writes the letter. Dr. Hogan, a local veterinarian, is skeptical about some of the animals who are given ESA privileges.

“We have had dogs with aggression issues certified and are now allowed on airplanes,” Hogan said.

When asked about this, Bosse said she agrees that it is a problem. It could potentially be easy to have a dog that should not be allowed in more public areas granted that privilege.

Bosse said she thinks those looking to certify an ESA should be mindful of this, and not have it adversely affect the concept of support animals in general.

“If you have somebody who goes through these channels, and gets this dog and it shouldn’t be approved and it is and it attacks somebody or something,” Bosse said, “That would give a bad name to the entire idea of having emotional support animals.”

Castle said she believes when certified properly, emotional support animals can be an extremely valuable tool to those who deal with anxiety or depression on a daily basis.

“They are wonderful aspects to have and I recommend it to anyone who thinks therapy itself isn’t fully helping it.”