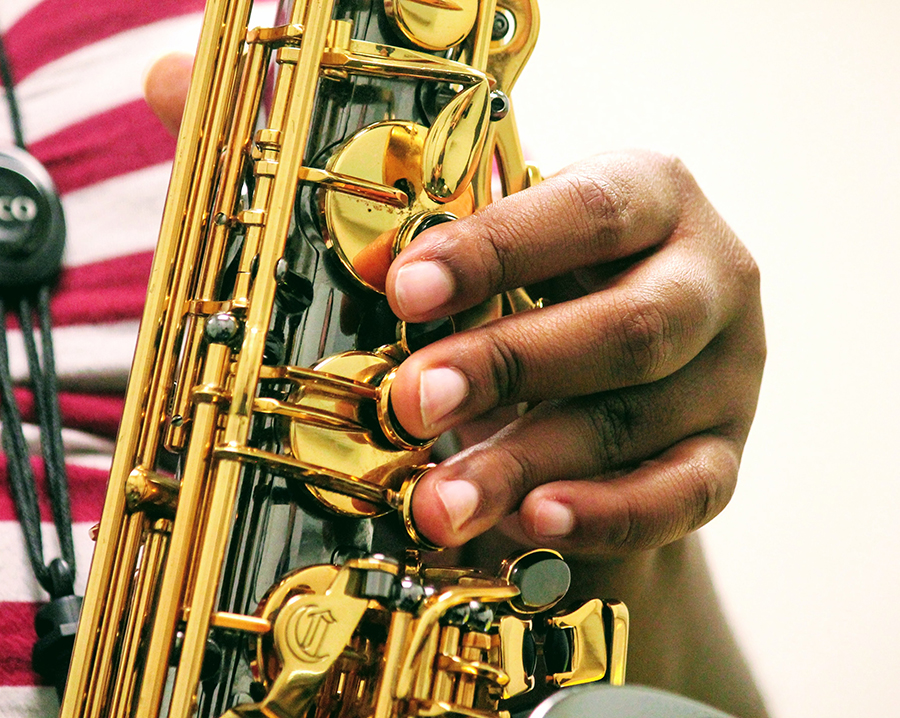 Kayla Upthegrove tinkers on her saxophone.

Entering a small recording studio on the third-floor of the SOTA building, Eric Snyder, a third-year musician double majoring in jazz studies and music technology–the latter being a new major offered this academic year–tinkered with his instrument, exerting energetic notes and fragmented melodies into the air. Once the instrument was tuned, Snyder dove into why he chose to study jazz at the collegiate level.

“I just like the music, I guess,” Snyder said. “It’s a really fun genre to play. There are a lot of opportunities to put your own spin on things, and to put your own ideas into the music–the improvisatory nature of it.”

Improv is a key component to jazz’s unique sound. It allows each artist to make the notes, rhythms and melodies their own. Kayla Upthegrove, a senior jazz saxophone performance major and the sole female saxophone player in the music department, expanded on the liberation jazz allows an artist to explore on stage.

“It depends on the type of setting,” Upthegrove said, “I would say what goes through my mind probably eighty percent of the time is, ‘Try to read these chord changes fast enough so I know what to play.’ But once I get comfortable enough, I’m just playing however, the song is making me feel in the moment. For example, if I’m playing a ballad, I’ll just get…”

Before finishing her thought, she imitates a fluffy saxophone scat, “But, if I’m playing a fast song, I’ll just go hard and play really fast–nothing slow–and try to make sure everything connects together.”

Improv can be seen when watching a live jazz performance where artists bounce ideas off one another and create an active conversation. Snyder compared playing jazz to speaking a language. Musicians utilize improvisation to develop their own dialect, style, and tone, but unify their sounds to craft a complete story.

Although improvising allows the artist to channel their creativity, no artist is wholly unique. Snyder said he gains outside inspiration both when playing and composing music.

“I look to other jazz musicians–the greats–and a lot of pieces are imitations of the things I like,” Snyder said, “I was always told that’s how you get started with composition and improvisation. You learn to imitate other people, then you start to develop your voice. Your voice becomes this combination of all the things you like.”

Snyder lists artists such as Freddie Hubbard, Miles Davis and Art Blakey as some of his favorites.

Jazz itself stemmed from a variety of other genres before it became what we presently perceive as jazz. It took form from African-American styles such as blues, ragtime and gospel. New Orleans, the birthplace of modern jazz, is where the assorted genres solidified into a prevalent style during the mid-Twentieth Century.

Like jazz itself, the instruments in which Snyder and Upthegrove play have a structured artform. The instruments most commonly associated with jazz are the saxophone, trumpet, bass, drums and piano.

Each instrument is capable of playing the same notes, but if jazz artists precisely followed the sheet music note by note, the genre would remain static. Snyder reached for his lustrous trumpet lying next to him before beginning to play Lee Morgan’s “A Night in Tunisia.”

Snyder focused his gaze at the horn’s apex. His fingers quickly pressed and released the buttons attached to the valves, creating a smooth and steady melody. The copper mute, a bubble-shaped piece of metal inserted into the instrument’s horn, caused the forced vibrations to come out warm.

You can hear Snyder and Upthegrove in this season’s jazz concert series. Outside of NKU, Snyder can be found playing in the Greater Cincinnati Area with his own band Mickey James and the Queen City Crew and the Belairs Show Band. Upthegrove plays in a salsa band, and is looking to start her own group consisting of herself and two NKU female jazz vocalists, which will infuse jazz and R&B.