Sketching it out: Aliens, animation and a festival 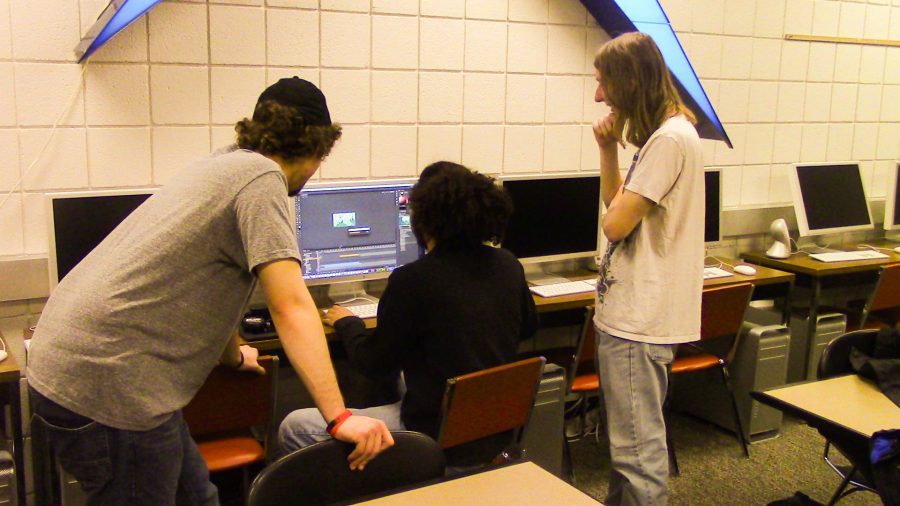 Brice Mills and his animation crew are creating an short film about aliens.

Brice Mills, who has always had an interest in animation, saw an announcement for the College Movie Festival and decided to pursue the experience.

In the past, he’s made minute-long animated videos. This year’s effort was more ambitious.

His new short, titled “The World’s Best,” will be the biggest animated movie he’s made yet; screenings will be held on April 23.

For the past ten years, NKU has been the only competing school not to create an animated short, said Chris Strobel, an electronic media and broadcasting professor at NKU and co-founder of the festival.

“Every year I would put out an announcement to the filmmakers asking if anyone was interested in making an animated film,” Strobel said. “Brice was the first to accept in ten years.”

The short is about a cook named Elise, a victim of alien abduction who is forced to compete in a cooking competition against other aliens. It is directed by Brice Mills, a media informatics junior.

Mills said he didn’t expect to be the director but decided to take a leap.

After he accepted, he found a crew of other animators, a writer, voice actors and a sound editor willing to help. Andrew Buchanan, Donovan Dietrich and Sonja Faul were the animators, while Dietrich and Faul also performed as voice actors. Andrew Jacob Ornelas was the screenwriter and Ian Paul and Drew Hendricks were the sound crew.

This was the first time he ever worked on an animation short with a group.

The festival requires that each student film must have a specific theme, a specific character with a name and job, an object and a line of dialogue. Mills and his crew were assigned the theme of corruption, a cook named Elise Williams, a coffee can and the line, “I’m just out of time.”

After they received their requirements, they went into pre-production where they designed their characters and their backgrounds. Pre-production lasted from Feb. 19 to Feb. 24.

During this time, they pitched their basic ideas and storyboarded what scenes they would animate. This process is where certain scenes are drawn before production so they’re easier to create as they move through the animation process.

“We just wanted the basic idea so we can get the movements down first, then we designed the characters, the backgrounds and everything that goes along with the story,” Mills said. “I did a rough sketch with stick figures just to get movements down and then I sent it out to everybody and we started animating the actual frame by frame of it.”

“We had just a really boring story. Everything was about being in a hotel and cooking for normal people,” Mills said. “One of our animators suggested, ‘What if it was about aliens?’ Then it became much more interesting to work on. It’s a cooking competition in space. It’s just more visually interesting.”

Buchanan, a media informatics junior, said he pitched the alien idea to Mills. He worked on the opening scene where the characters live on Earth before they are abducted.

He too has made animations in the past. He said he heard about the festival, then found Mills was looking for other animators so he joined.

With pre-production over, the crew could begin animating their short. Production on student films began on Feb 24. It lasted until March 25. Re-shoots and refinement took place March 25 to March 31. The deadline was March 31.

Mills and the other animators said that the animation process wasn’t too hard, it’s just time-consuming, even with a month to create everything.

He said they were working on animation even until the day of the deadline submission.

“If only we had one more day, that’s how we all felt,” Mills said. “It was weird it was on a weekend.”

Buchanan said his prior animating experience helped him to feel less stressed during the crunch time period. He said he was actually surprised by how much time they had.

Dietrich animated the scene where Elise wakes up in an alien prison after her abduction. He said it took hours to animate even just a couple of seconds of footage.

Mills worked from mid-afternoon until the early morning hours to put the final touches on the short.

Mills said once they got to the voice acting part, it stretched the short from two minutes to around five. They recorded the voice work in a sound studio in Griffin Hall.

When directing voice actors, he said that a director has to guide them to speak in specific ways. Voice acting can be a hit or miss process, according to Mills.

“They would say they’re line, then I would say you need to say it this way. Pause in a certain spot,” Mills said. “If they screwed up a line, I’d tell them to redo it. You have to direct them or otherwise they just talk. There won’t be enough emotion or acting.”

In addition to animating, Dietrich was asked to voice the character of the grandma.

“I’ve never done voice work before. I was asked if I could voice one of the characters and I said, “Why not?”” Dietrich said. “It’d be easier than getting an actual grandma.”

To get into character, Dietrich said he hunched over like an old lady and thought about how his own grandma spoke.

The difference between live action and animation is major, Mills said. He explained that with live action you have to worry about where you shoot and how good your actors are. Your actors can be garbage and have awful body language and awful voice acting.

Mills said that in live action you are restricted to what human bodies can do like they can’t do crazy stunts. He said that they can’t control the weather and they have to worry about schedules.

“For us, we can manipulate that. This is where the characters are and this is what the weather looks like,” Mills said. “We don’t have to worry about setting up schedules. We don’t have a big crew. Just a cast of people to record dialogue for. We can get that done in a day.”

Dietrich, a studio arts major and animator on the short, said he prefers animation to live action.

“With live action, you’re limited to what you can do, you’re bound by the laws of physics,” Dietrich said. “With animation, it can be anything. There’s no limits.”

The festival screening and awards will happen later this month. The festival will have students from every school involved in one room to watch their work.

Now that creating the short is done, Mills said he was glad to have worked on it. He said it was a fun experience he’d do again.

“I became good friends with these guys,” Mills said. “I didn’t know any of them, now we talk normally.”

Buchanan said the festival is a way to show off his work and make connections with other people. He said the crew were good people and he enjoyed the time he worked with them.

With the short being shown soon, Mills said that he’s not nervous to have his work screened.

“Even if my film bombs and it sucks, I had a good time,” Mills said.