WATCH: Spoken word and speaking out 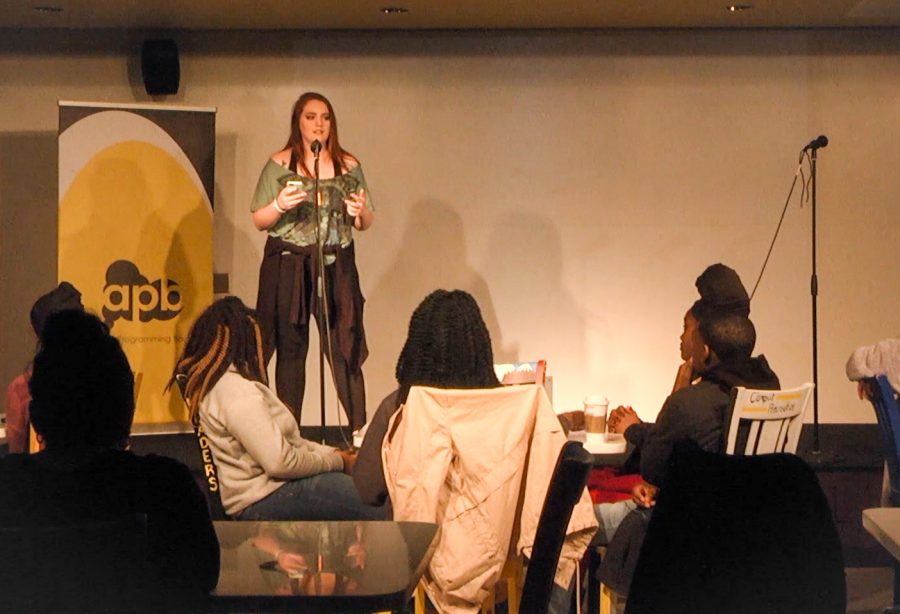 The spotlight was on center stage as a Northern Kentucky University freshman walked up to the microphone and paused. She quickly glanced at the audience, took a deep breath, and recited her own poetry.

Activities Programming Board sponsored their first poetry slam on Tuesday in the Student Union.

The planning process began last semester, according to APB President, Victoria Hafele. She said the idea came from the speaker committee within the APB.

“Typically we bring in a speaker, and have them talk about their experiences,” Hafele said. But they (APB’s Speaker Committee) really were interested in bringing art into our events with students and their perspectives, and their life experiences. Rather than bringing the speakers from external sources.

APB wanted to focus on having a speaker or an event that was more internal and connected with the campus.

Hafele believes that this event is a great opportunity to learn more about creativity within a different element.

Throughout the night there were eight performers; There were seven NKU students and one NKU alum.

Most of the artists performed two or more spoken word poems.

Tekiuh Hutton, a psychology major at NKU, performed four different pieces and addressed topics such as religion and loneliness as the event began.  She then closed the night with four more spoken word poems.

Hutton was introduced to spoken word by a friend when she was a freshman at NKU and has felt called to it  ever since.

While writing spoken word, Hutton typically focuses on topics like self-image, her religion, race, music, and general thoughts about where she is at in her life.

Hutton said that her favorite topic to write about is her religion and faith, since it’s a big part of her life.

“I definitely love writing about God for sure because that brings me encouragement and I get to combine what drives me every day in life with my art, and so I get to minister to other people by using my gift,” Hutton said.

Another artist, who performed two pieces, was Charles Williams.

As a child, Williams would listen to rap. Once he became an NKU student, he saw a parallel between the art forms of rap and spoken word.

Most of the artists who performed did so because they used spoken word as an outlet for emotions and experiences that they had encountered.

Lexie Stepro began writing three years ago, as a sophomore in high school and believes that her experiences–covering topics such as eating disorders and rape–were given to her for a reason.

“I was given these things because I was strong enough to handle them, and talk about them, and present them in a way I can reach out to other young women who are also going through the same things,” Stepro said, adding that these experiences have helped her reach out to others.

Stepro said that she was nervous because this was one of the first times that she has performed on campus and in front of her peers.

However, Stepro is encouraged that there might be one person out there in the audience who needs to find comfort in the fact that they are not alone in their struggles.

Throughout the night there were spoken word poems about race, religion, sexual assault, eating disorders, and nature.

On Mar. 28 APB will collaborate with LGBTQ Programs and Services to sponsor another open mic night with a special guest as the headliner.