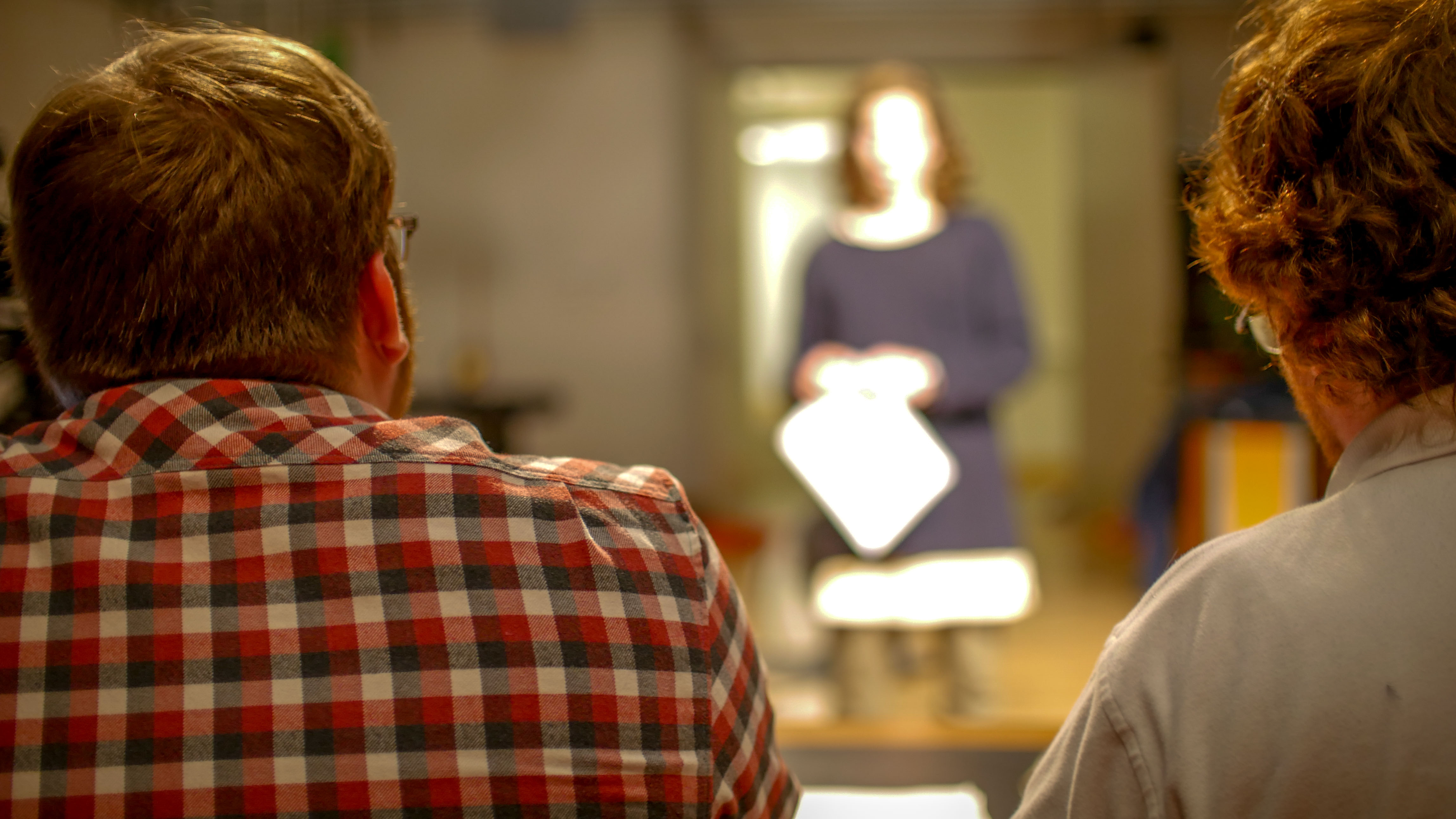 Cornett and his assistant, Isaiah Short, are excited to to work with the actors they’ve chosen. (Alec Reynolds)

Cornett and his assistant, Isaiah Short, are excited to to work with the actors they’ve chosen.

Arcade to theater: Auditions held for “Pac-Man the Movie”

The bright lights gleam down on each actor as they audition for the roles of either Pac-Man, Inky, Blinky, Pinky or Clyde in the student film, “Pac-Man the Movie.”

An actor auditions in Griffin Hall’s Large Performance Studio; others await their shot outside the room, the atmosphere lax.

Ethan Cornett, the film’s director, sits calm and quiet, letting the students act out their roles, only interjecting when he wants to ask questions or push them in a different direction.

A few hours ago, Cornett worried no one would show for auditions. Now, he’s judging people on their acting ability.

The Jan. 25 audition was Cornett’s first time auditioning actors. He said he was “terrified” about it.

Cornett, a junior electronic media and broadcasting major, came to NKU because of the strong film department, which has allowed him to grow as a filmmaker.

Cornett realized he wanted to make films when he was in middle school. His older brothers would create their own home videos while he watched. Then him and his family would sit down in front of the TV and watch his brother’s movies which helped inspire him to make his own films later in life.

He said his family has always supported his decision to make films.

“Family is very important to me,” Cornett said. “I wouldn’t be here without their support.”

As a lifelong retro video gamer, Pac-Man is a personal project for Cornett.  It’s a film made not for a school project, but as a genuine fan, Cornett said.

“I enjoy the simplicity of it,” Cornett said. “It’s so simple and that means it’s open to imagination. Most people think Pac-Man is a good guy. I thought about, what if Pac-Man is the bad guy? What if he’s stealing fruit from the ghosts?

“I did a lot of research about the characters. When you read about them, then play the game, you’ll realize they have their own personalities.”

His interpretation of the characters will be similar to their videogame counterparts.

“Making the ghosts was fun. All the characters are based off their personalities,” Cornett said. “Pinky likes to trap Pac-Man. Blinky, the red one, likes to follow him around. Inky is the scared one. Clyde goes crazy.”

The film won’t rely on special effects, but the characters will have their own unique, subtle costumes.

“My friends suggested that we give them hoodies to match the color of their characters. That’s was too on-the-nose,” Cornett said. “I’m going to do something like Clyde, the orange ghost, having an orange pair of headphones. Blinky will wear a red beanie. We’ll have stuff like that.”

Cornett wants the film to avoid looking like the game, but still have the feeling of Pac-Man.

Auditions were nearly over, with only a couple of actors yet to show up. This became a learning experience for Cornett.

“It was a terrifying experience having to judge actors,” Cornett said. “We’ve seen every type of actor except for a bad actor. I can tell who’ll be filling these roles already.”

His worries were alleviated when auditions went better than expected.

One of the students who auditioned, sophomore theater major Andrew Weidner was pleased with the audition process.

Cassidy Morgan, a freshman media informatics major who auditioned for Pinky, said Cornett was professional and passionate about his work.

Noah Dean-Brown, a media informatics major, auditioned for Inky and said Cornett was “very encouraging” and that he hopes they can properly adapt the video game to a film format.

“It was a blast working with Ethan in casting,” Short said. “I’m looking forward to working with the actors’ we’ve chosen.”

Cornett was thankful for Short’s help in selecting the cast.

“The worst part is that it’s nerve-wracking,” Cornett said. “I’m not good at judging people. But I am thankful for my friend Isaiah. If he wasn’t here, I wouldn’t be calm or be having a good time.”

With auditions out of the way, filming can start soon. Cornett says he does worry that something will happen during production.

The biggest issue he said he’s anticipating though, is getting all the actors together to film everything. Everyone’s schedules have to match up for the film to be finished in time.

“It’ll be a tough task, but with my crew I know we can do it,” Cornett said. “Hopefully everything will fall into place. I’m hoping I can submit it to film festivals as well.”

Even if the film isn’t accepted by film festivals, Cornett said he still has plans to upload it online  for people to see.

Cornett and his film crew hope to finish filming by the end of February. By the end of this spring semester, he said he hopes to show the film in the Griffin Hall Digitorium.

“This is the project that I want to make and be proud to say that I made this,” Cornett said. “I want to show it off to as many people as I can.”