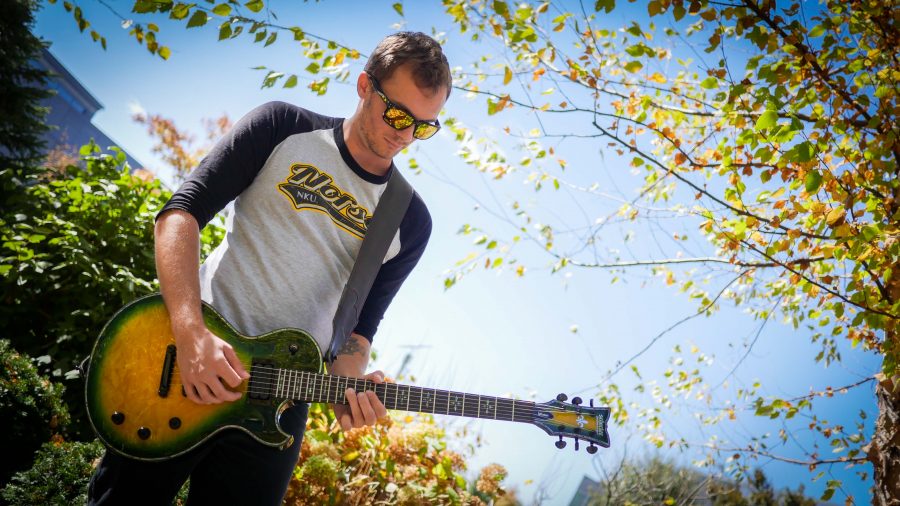 Josh Smith joined HereComeHere after learning all their songs prior to his audition.

Josh Smith carried a white, padded stool from behind the drum set to sit with his bandmates.

“How do you sit on this thing,” said Smith, NKU senior and guitarist for the band HereComeHere. “It’s about to break.”

Tyler Abbatiello, the drummer, laughed as he told him it wasn’t that bad.

Three of the band members, along with Abbatiello’s dog, Gus, sat on a small couch in the basement where they practice. A giant check hangs behind them, a reminder of the $2,500 awarded to them for winning the 2014-2015 Madison Theater band challenge.

Smith, the newest member, sat on the stool a few feet away from the rest of the band in the hazy, smoke-filled practice room.

The band was meeting to practice in preparation of the new record they’ve been collecting money for. They posted an Indiegogo campaign in September to help cover some of the cost needed to record the album.

After a couple days the project was 50 percent funded. Months later, the project exceeded the $1,000 goal and is now sitting at $1,265.

“It’s really cool, people actually want to hear our stuff which is very validating,” Smith said. “People were as behind this as we were behind ourselves.”

Drumheads donning the band’s name in spray paint hang on the walls; guitars, drums and microphones were packed into half of the room.

“I didn’t know where to go as a musician and that’s actually when I started at NKU,” Smith said. “It was part of this whole ‘What am I going to do with my life now that I’m not playing music, and I’m in my mid 20s and what do I do.’”

Smith, the first musician in his family, picked up a guitar when he was 14 after his younger brother got one for Christmas and left it untouched.

“I stole it from him and just started messing around on it and realized it was something I liked doing, and it kind of went from there,” Smith said.

Smith was left without a band after Amongst Villains, a hard rock band that he had been with since he was 15, broke up after some members decided to start families and not pursue music full time.

“It was sort of like your long term girlfriend dumping you,” Smith said.

“And we were the rebound,” said Bryce Hogland, the band’s bass player.

HereComeHere’s first guitarist Mike Malowski moved away and left the band, which forced the remaining members to find a replacement.

“One guy showed up high with a huge pedalboard and didn’t even know how to use it,” Hogland said.

“One guy played out of a PA (public address system),” Abbatiello said.

But HereComeHere found a solution in Smith.

“Then we met Josh, and Josh came prepared,” Hogland said.

Smith had posted an ad on the “Cincinnati Area Musicians” Facebook group saying he was looking to join a hard rock or metal band.

Tom Bodner, HereComeHere’s singer, saw Smith’s post and reached out, encouraging Smith to give their band a shot.

“Anytime you do something for a number of years and get comfortable at it you start to get a little bit complacent, maybe a little bit stale,” Smith said. “I had an opportunity to do something that was completely different and step outside of my own comfort zone and try something different. That was a really exciting process for me.”

Smith eventually saw HereComeHere play — it was Malowski’s final performance with the band.

After listening to several hopefuls play, the band knew that Smith, who had learned all their songs before the audition, fit with the group.

“When he would go to the bathroom or something we’d just be like, ‘Should we tell him? This is right, this is the right fit,’” Bodner said. “We were like, ‘No, let’s keep it in suspense let’s not act like we’re desperate, even though we are.’”

Bodner had sent Smith a list of songs to learn to give him some background prior to the audition. One song Bodner left out was “Wax & Wane,” a song the band doesn’t play anymore.

Smith even knew that song.

“We didn’t have to teach Josh,” Hogland said. “He came prepared, so that was really impressive … once he joined the band we started playing shows immediately.

Thanks to his time at NKU, Smith said he has a better understanding of the music industry and the business side of the band.

“I’ve been focused on just the music playing part of it for so many years, and now that I’m here at NKU I get to explore all different sides of EMB and all that as well,” Smith said.

Smith’s classes provided a way for the band to create their first music video as well. For Smith’s final project in his media aesthetics class he shot and edited the music video for their song “Seasons.”

While Smith is the new guy in the band he said it was easy to fit in with the group that had been together for a couple years prior.

“Having a band that has its own history is also kind of cool, I’ve got to prove myself a bit more,” Smith said. “It’s so much different, so much cooler, better, all the things that you want as a musician in a band.”