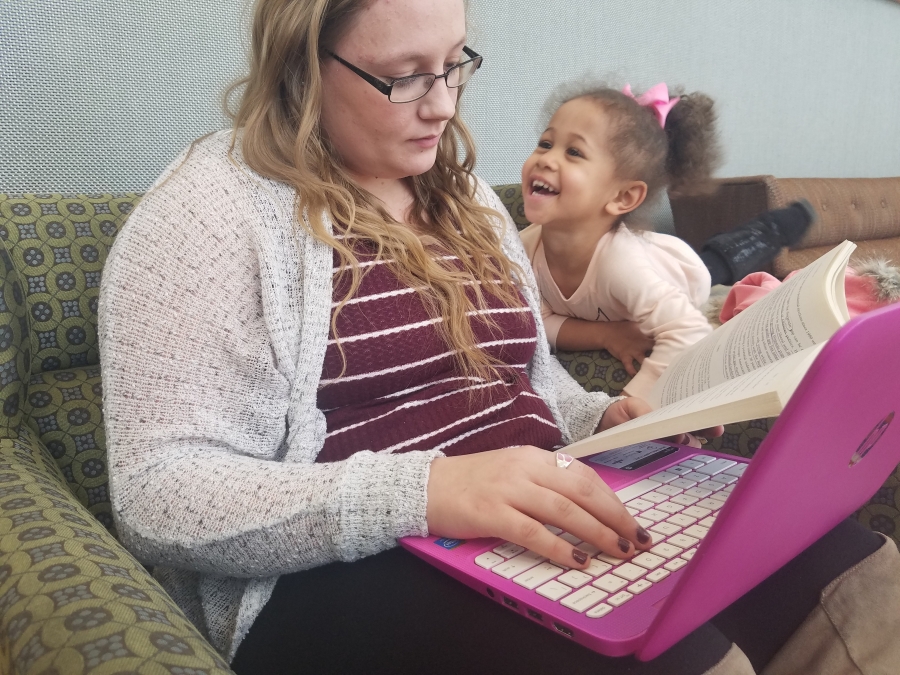 ‘I won’t give up’: Single parent perseveres through the holidays

“I don’t know what they are going to do without me,” Cooper said.

“It makes me scared to leave them.”

Cooper, a junior political science major,, works year round to support her 2-year-old daughter, Chloe, four  siblings, and ailing father. Despite the pressure of providing for her family, Christmas remains the highlight of her  year.

“There isn’t a small Christmas for us,” Cooper said. “I make sure of that.”

Working at the Early Childhood Center (ECC) on campus provides childcare for her daughter and a source of income for Cooper.

Cooper said she has been saving a portion of her wages since early June so she can shower her family with Christmas gifts.

“I can’t take any extra shifts, but I bust my butt to be sure each of the children have nine gifts to open Christmas morning,” Cooper said.

Cooper first started using the ECC as a childcare service for her daughter while attending classes. There she met Chloe’s teacher, Amanda Johnson, director of Learning Experience And Parenting (LEAP), a program on campus designed to assist parents while they earn their degree.

Johnson encouraged Cooper to join the ECC team after Cooper confided in her about the financial struggles of being a single-parent student.

Since working at the ECC, Johnson said she has seen Cooper excel tremendously in her academics because she is spending more time on studies than ever before.

“Before she struggled a lot with other employers working around her schedule,” Johnson said. “This gives her breaks to spend time on her projects.”

When Cooper is not at work or studying, Amy Bryant, Cooper’s mother, said she works hard around the house. She mentioned that Cooper is “the family mom” when Bryant is working night shifts.

Cooper takes on most of the household duties like cooking and cleaning while aiding to her father in need of a kidney transplant, she said.

“I don’t know if I could have done what she is doing,” Bryant said. “She’s there when I am not there, especially for my husband who is sick and can’t do all of those things.”

Cooper admitted that having the whole family under one roof can be stressful and sometimes tiring. She wants to live on her own with Chloe but feels nervous to leave household responsibilities to her siblings.

Due to her father’s inability to take on financial obligations, the family is left with only the incomes of Cooper and her mother.

Through LEAP, Cooper joined K-Tap, a program funded by a grant to assist families in need.  Johnson said LEAP will only continue to provide more resources for student parents and their dependents.

“During the holiday season, LEAP will partner student parents with a member of the NKU community that will provide Christmas gifts to their family,” Johnson said.

Cooper said her obstacles won’t get in the way of being successful both in her family life and collegiate career.

“Just because I have a child doesn’t mean I should give up,” Cooper said. 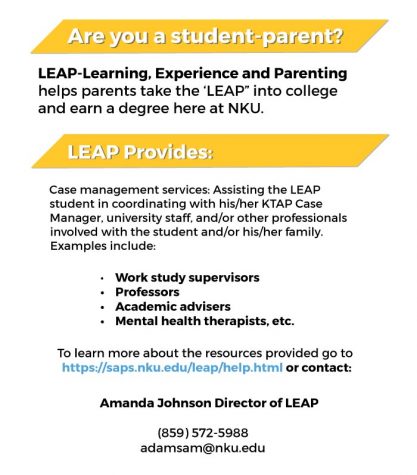