Elisa Argueta who identifies a lesbian is proud of who she is. She worries she will have to hide herself if Trump is elected. (Emily Osterholz )

Elisa Argueta who identifies a lesbian is proud of who she is. She worries she will have to hide herself if Trump is elected.

As the nation considers what this historic election will mean for the global community, NKU’s LGBTQ community considers what’s at stake for LGBTQ equality under a Trump presidency.

Jill Frakes, Nathaniel Hudson and Elisa Argueta spoke to The Northerner about Trump’s potential presidency and how he has approached the LGBTQ community  and  different races and ethnicities. 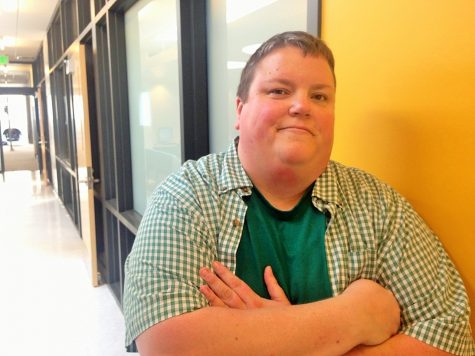 Emily Osterholz
Jill Frakes thinks the elections, this year, are a nightmare. She is worried that Trump will eliminate the progress made towards equality for LGBTQ people.

Jill Frakes,  ambassador for the Office of LGBTQ Programs and Services, is concerned that the amount of progress made towards equality for LGBTQ people will diminish if Trump is elected.

“He has stated that his first day in office he would overturn gay marriage,” Frakes said. “He will take our rights away. That is scary. It would be taking steps backwards instead of forward.”

Frakes said the elections this year are a nightmare, and she thinks it seems like a big farce.

“I’m wondering if the Democratic or Clinton campaign hired Trump to act like a fool, so she would win because he is saying things and doing things that no decent human being would say or do,” Frakes said. “It is concerning that he’s getting the white supremacist feel and getting folks fired up.” 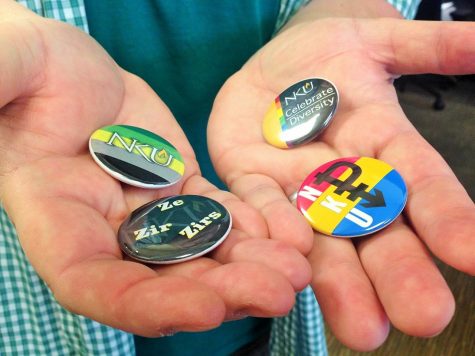 Emily Osterholz
Frakes and her wife are organizing a ‘safe spot’ in front of Norse Commons after the voting on Nov. 8 for people who had negative experiences and need support.

Frakes and her wife are planning to set up a ‘safe spot’ in front of Norse Commons later in the evening on Nov. 8 for students who are feeling intimidated and anxious for not only the results of the voting but also for how aggressive she said some of the Trumps supporters can be.

“If you’ve seen the Trump supporters, they can be kind of ridiculous and most of the trans folk are scared to go vote because if they haven’t made the full legal transition yet, their ID is not going to match,” Frakes said. “We’re actually going with another ambassadors polling place with him because he has a full beard, his voice is deep but his ID says he’s female.

Frakes encourages everyone to do their research and keep an open  mind for the upcoming election.

“I would say to Trump supporters you know at least one person who is gay so vote with conscience,” Frakes said. “Be kind to one another, kindness makes the world go round.” 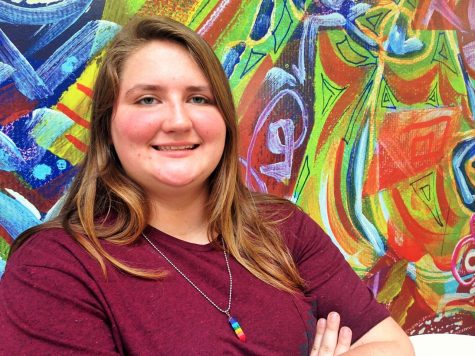 Emily Osterholz
Elisa Argueta, educational chair for Common Ground, is scared for the approaching elections. She fears having to hide herself.

Elisa Argueta, educational chair for Common Ground and ambassador for LGBTQ’s Programs and Services, said  some of things Trump says about  LGBTQ issues and Hispanics are extremely offensive. She said even Trump’s running mate, Mike Pence, is belligerent because he would like to abolish same-sex marriage.

Argueta is scared of the upcoming election because she is worried she will have to hide who she is.

“I don’t want to have to survive a presidency,” Argueta said. “I feel like if Trump wins I will have to survive a presidency. Worst comes to worst, I will have to throw all my pride shirts away, and I won’t tell anyone about who I am. It’s terrifying. When you see a Trump sign in someone’s yard it makes you afraid to let them know who you really are for fear of persecution.” 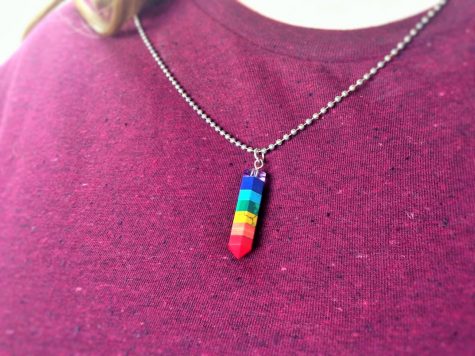 Emily Osterholz
Argueta said that if worst comes to worst she will have throw all her pride shirts away, and won’t tell anyone about she is.

Her mom is white but Argueta’s dad is from El Salvador, so not only does she fear for the LGBTQ people, but she also worries for the different minorities and races in America.

She said racism and homophobia in America is very underground, so  people don’t vocalize it.

When people who don’t support the LGBTQ community  see a presidential candidate vocalizing their thoughts it makes them feel like they found someone who understands them, according to Argueta.

“My dad’s a soccer coach and coaches my little brother,” Argueta said. “Some of the parents on the team are Trump supporters. I guess they don’t realize that my dad was not from the United States originally, so it’s weird to see these people that are so close to you, especially in your community or even family, that are so for Trump. And support someone who discriminates against people like my dad.

“Do you not realize that by supporting Trump you’re calling my dad, your son’s soccer coach, a second class citizen?”

Emily Osterholz
It’s Nathaniel Hudson’s first year to vote in the presidential election. As the election draws nearer he feels stressed over Trump and his supporters.

A senior majoring in computer science, Nathaniel Hudson served as an ambassador for LGBTQ Programs and Services during his sophomore year.

He finds politics very fascinating and is constantly reading about the elections to stay up to date. This is the first year Hudson will be able to vote in the presidential election.

Hudson admits to being stressed for the elections this year. Similar to Argueta, Hudson said Trump has said so many awful, stereotypical and negative things about the lives of African American people in the country.

Hudson’s fears lie with how discriminatory Trump is towards African Americans and other minorities.

Hudson doesn’t feel Trump has been as open about being hateful towards the LGBTQ community,  but he has demonstrated a pure lack of interest in promoting issues to improve lives in LGBTQ Americans.

“Clinton has talked about important policies that impact the LGBTQ people,” Hudson said. “Trump at a rally took a LGBTQ flag, hung it upside down, wrote LGBTQ for Trump on it and just waved it. I feel like Trump has an indifference there which can be just as damaging.”

Hudson said that if Trump were to be elected president he would feel very uncomfortable just knowing that, as a country, we chose that.

“The idea just instills an unease in me,” Hudson said. “I feel like it will impact the people in and outside the LGBTQ community and just the idea of supporting someone like that.”

Hudson encourages all the NKU students to vote, if they can.

“Even if you feel like your vote doesn’t count, it does,” Hudson said. “Get everyone you know to vote, friends, family and vote.”