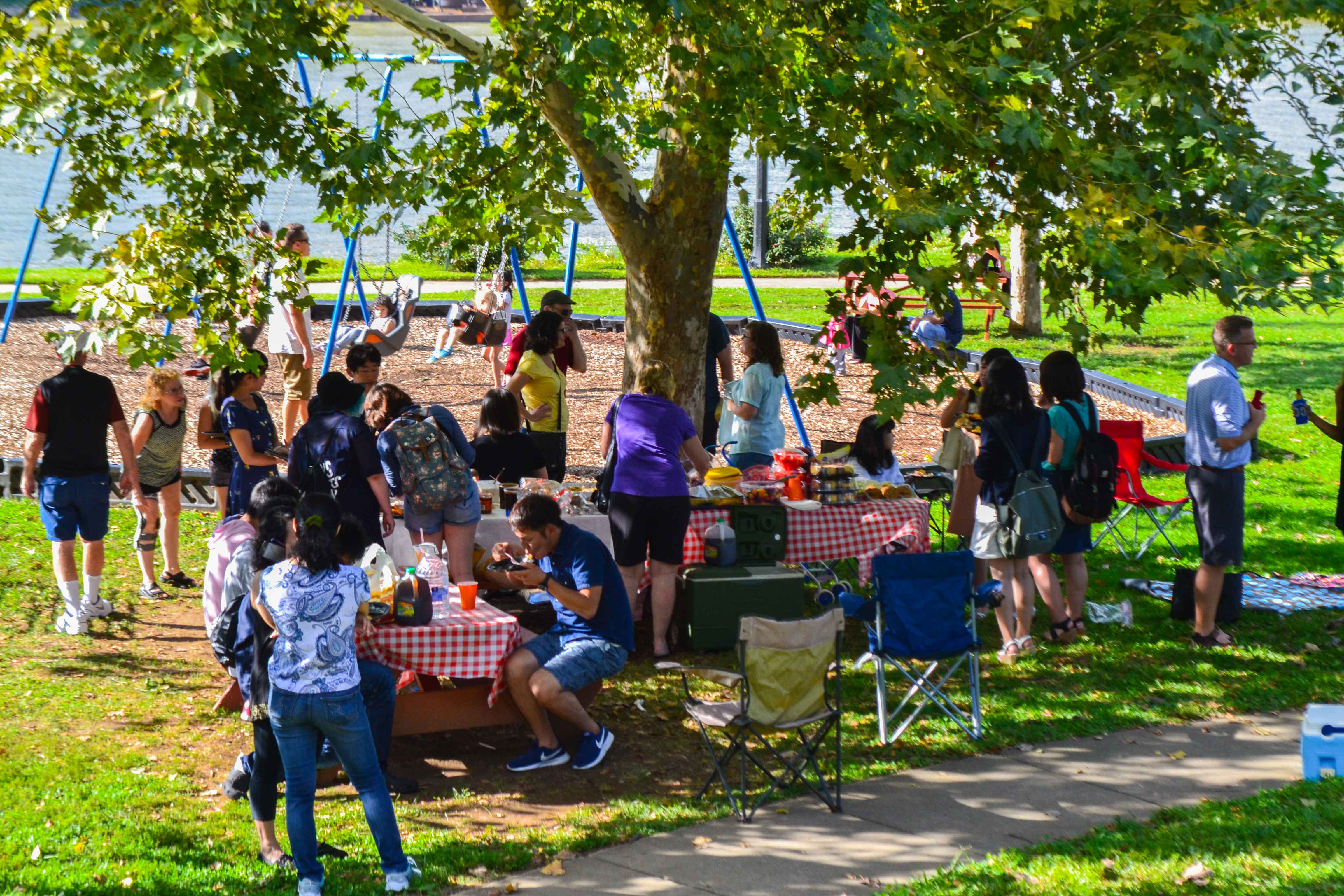 Japanese exchange students, host families, and The Office of Education Abroad staff have a picnic at Bellevue Beach Park. They are enjoying their last weekend in America. (Leonard Ivey)

Japanese exchange students, host families, and The Office of Education Abroad staff have a picnic at Bellevue Beach Park. They are enjoying their last weekend in America.

After two weeks of exploring Kentucky and Cincinnati — and yet another week to come — the Gifu students were ready for a little bit of downtime. It was time for a small going-away party at Bellevue Beach Park in front of the Ohio River, and they had earned it.

After all, in only so little time they were doing so much: from going to watch The Reds and The Bengals in Cincinnati, to taking a tour of Bellevue, to visiting museums in the area, and even going horseback riding in Lexington, they checked off quite the exhaustive itinerary.

Not to mention, of course, that they are Japanese exchange students still learning English.

Gifu University, a college in central Japan that enrolls approximately 8,000 students, sent 11 of its students to NKU for a three-week cultural exchange for the second year in a row. The students arrived on Aug. 26 and left on Sep. 15; their going-away party was on the Sunday before their departure, Sep. 11.

While in America, they were expected to take English classes and put on some presentations about Japanese culture for local schools; outside of that, they had plenty of time to enjoy the people and places of Kentucky and Cincinnati.

A “give-and-take” of culture

Candace Gibson, the Special Projects Coordinator for the Office of Education Abroad at NKU, worked with Dr. Toru Tatsumi of Gifu University to arrange the program. She manages the schedule for the exchange students, and during Labor Day weekend she connects them to host families for a weekend homestay.

“[For NKU students], we do the semester- and year-long exchanges with Gifu — they’re already one of our exchange programs — but they have decided they wanted to do something that was more of a short-term English and cultural exchange [for their students],” Gibson said. “So we decided to do this during their summer, which happens to be right in the beginning of our fall semester.

“For three weeks they stay right here on the river at the Comfort Suites, and they [use the TANK system to] come to campus every day.”

The Office of Education Abroad had arranged for trips such as a visit to the Slugger Museum in Louisville, a Reds game and a Bengals game, a tour of the Toyota factory in Georgetown, and horseback riding in Lexington.

“A lot of the students, when they know they’re coming to Kentucky, they want to ride a horse, they want to try barbecue — you know, things like that. So we’re trying to make sure they get as many of those regional cultural experiences that they can get.”

Joining them in all of their cultural experiences is NKU alum Arturo Minera. He comes along to provide insight about the local cultures wherever they go.

“I get to be the person that sees [the students learn about the American culture], and help them understand and even talk it out,” Minera said. “I’m just there to make sure that they are enjoying and seeing America for what it really is.”

Minera believes the experience is mutually beneficial to both the Japanese students in the exchange program but also the American students that volunteer to go places with them.

“It’s been awesome how, everywhere they go, even though their intention is for them to learn about the American culture: whatever we’re going to see or do, the Americans on the other side end up learning as well.

The Japanese students themselves have come to America for many different reasons. Yuka Nishio wanted to improve her confidence in speaking English. She was pleased with how helpful people in America were whenever she was speaking.

“They are very kind…. When I got some trouble because of my English, they talked to me and helped me. So I was very happy and enjoyed my stay.”

On the final weekend of the program, Labor Day weekend, the students were paired with a host family to spend the holiday in an American household. Gibson considers this time to be very valuable.

“There are multiple reasons for our host family stay. One of them being that they are [staying] on the river, and Riverfest is a little — intense,” Gibson said. “So that’s the chance for them to check out of the hotel and spend a good American holiday with a family.

“It’s a little more special than just spending a day or two with them: Labor Day’s normally a time when people plan some nice outings, or they’ve got picnics with their family and friends. So we kind of let them take a break from the hotel and all of the madness of Riverfest.”

She also thinks that not only do the students benefit from the homestay, but the host families also take away something special from the experience.

“I’ve seen so many of our host families that have just — you know, they’re so excited that not only are they opening their home and sharing their culture, but their children are getting more of a glimpse into other cultures in the world. It’s helping them to understand more about people who aren’t exactly like them,” Gibson said.

“I’m Facebook friends with a lot of these host families and a lot of the students from last year, and I can see where they still communicate on Facebook and they form a pretty lasting bond. For several of our host families, this is their second year in a row, so they’re always willing to do this again; apparently they’re getting a really great experience out of it.”

Indeed, the host families themselves echo this sentiment. Matt Steinhauer and his family have hosted every time the program has happened since he became an NKU student, and after hosting the first time he even decided to go to Gifu University to study for a year. He says the experience of hosting and studying Japanese completely changed his career goals.

“[When I originally enrolled at NKU my plan was] to learn enough Japanese to get by and be a computer science major…. So that first year I started taking Japanese, and I had the opportunity to host someone and I did. I couldn’t speak anything, but gradually I was getting introduced to all this Japanese culture which I turned out to love… It really resonates with me,” Steinhauer said.

“Before I realized it, I became an integrative studies major focusing on East Asian studies and Japanese.”

Ashley Reed and her family hosted for the second time this year, and she is planning on doing it again next year. She does her best to accommodate the students and make them comfortable.

“Everybody, whenever you host, is kind of nervous at first; but once you crack that shell, they really feel like they’re part of the family. I like to give them a night to themselves so they can acclimate to the house and don’t feel pressured to do anything…. And then I spend time with them during the weekend, and I always ask, ‘What do you want to do?’ And I try to make whatever they want happen,” Reed said.

If one wants to participate in the program as a host family, they can contact the Office of Education Abroad here. 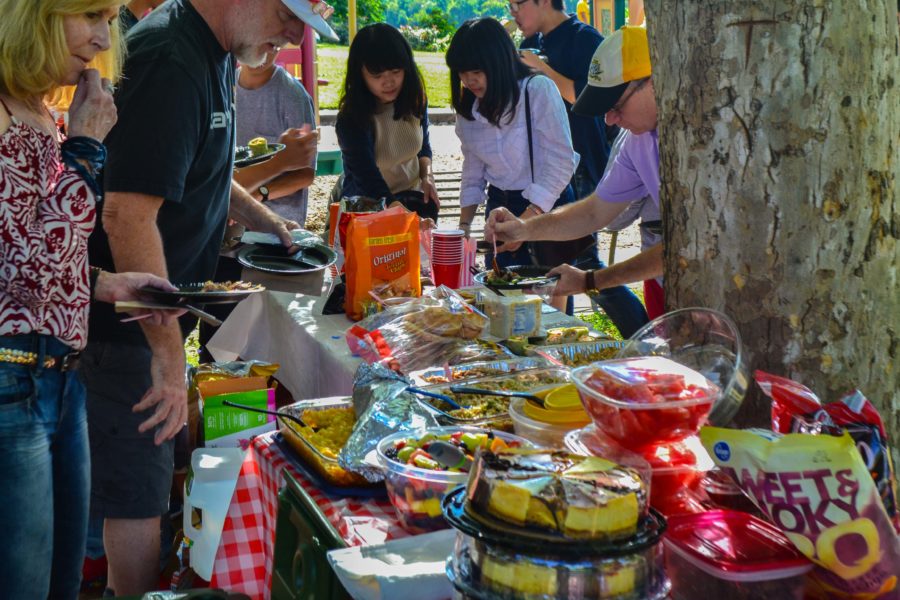 Gallery|3 Photos
Leonard Ivey
The students and host families enjoyed a variety of foods from both America and Japan, such as barbecue and green tea cupcakes. The picnic was held at Bellevue Beach Park.