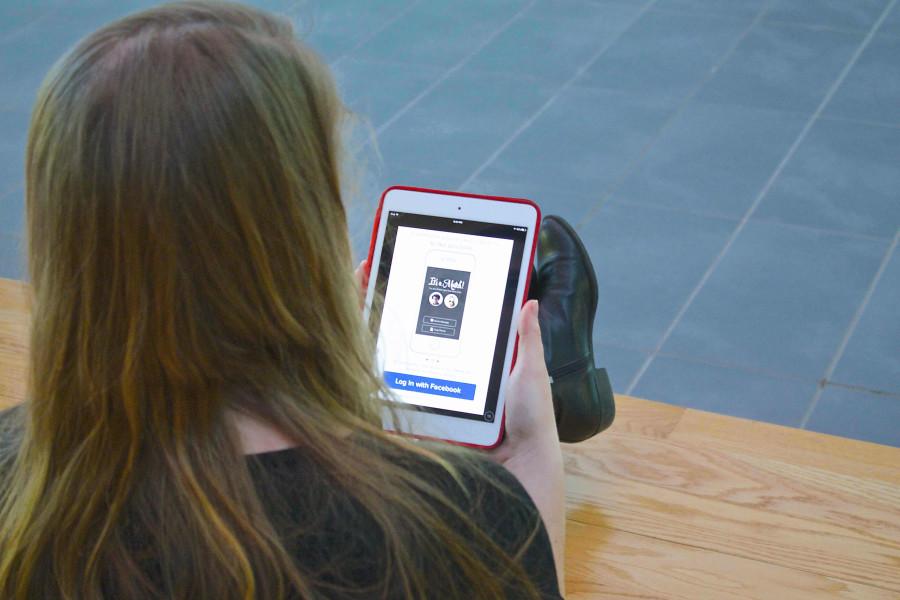 Senior English major Ally Hubbard never expected that a dating app would lead her to getting married in a Rafferty’s, but after three months of dating her Tinder match, that’s where she found herself.

Tinder is an app where users swipe left or right on a person’s photo. Swiping left indicates no interest whereas swiping right shows interest. If the user swipes right and so does the other person, that creates a “match” and they can begin talking to each other.

Based on the words “tinder” and “match”, it’s clear that the app wants to help users find their spark in a simplified way.

Hubbard had just come out of a two-year-long relationship when she decided to get a Tinder.

She and her roommate would swipe for fun until she came across a guy who looked like Dallas Green from City and Color, one of her favorite bands. This man was Brandon Hubbard.

“I swiped right on him and immediately I got a message,” Hubbard said.

After that, Hubbard got back with her boyfriend and deleted Tinder. When they broke up again, she re-downloaded Tinder and found Brandon again.

“He and I talked for, like, six months on and off,” Hubbard said. “And one day, we decided that we were going to hang out and I went to his house for ‘netflix and chill’ and that was actually the premise of it (relationship).”

Hubbard said that they started hanging out.

“It just started as a hook-up,” Hubbard said.

One day, Hubbard finally asked him what he was looking for after noticing he still had his Tinder and he said that he wasn’t interested in anything serious.

Hubbard then went on a Tinder date with someone else and when Brandon found out about it, he was upset. That’s when Hubbard and Brandon decided to be more serious.

“But it came with backlash, Tinder has backlash,” Hubbard said. “I was over there (by Landrum) one day and this girl came up to me and said, ‘So you’re dating a guy named Brandon Hubbard?’ And I said, ‘Yeah, he’s my boyfriend’ and she said, ‘I slept with him six months ago’.”

Hubbard said that because of all that, the beginning was rough.

“We accidentally started liking each other,” Hubbard said. “It didn’t start out like that.”

During their three months together, Hubbard became close with Brandon’s six-year-old son, Connor. Through that, Brandon moved in with Hubbard and they began their life together.

“He just slowly started to move in,” Hubbard said.

On Sept. 28, 2015, they eloped in the Rafferty’s restaurant in Florence, Kentucky during lunch.

She had her friend who was a minister to marry them. However, he had recently been asked to leave the ministry after he came out as gay.

“His best friend came down from Hillsboro and my best friend (came too),” Hubbard said. “And a gay minister wearing a snapback married us in Rafferty’s.”

“It was over a year ago,” Boyd said. “I was on Tinder, and I matched with this guy and he was a cute hipster guy and he played the banjo.”

Boyd said the conversation started out really well, and they added each other on Snapchat.

“At one point, I was showing his profile picture to my roommates,” Boyd said. “And I looked down and saw one of his mutual friends was my sister.”

That’s when Boyd found out that her sister had dated the same guy in high school. Her sister described him as “creepy” and that he still checked on her Facebook page.

“I freaked out and deleted Tinder,” Boyd said.

Boyd got a snapchat from him saying that he realized who she was and that it was awkward.

“And both of us are now with significantly better people,” Boyd said.

Boyd said that she thinks people can meet and have a longer term relationship, but not get married.

“I think people think of it as a confidence booster,” Boyd said.

Boyd does think that other websites other than Tinder are more credible.

“It’s not so superficial,” Boyd said.

“I think we are just adapting to the same needs,” Yungbluth said. “In some ways, things haven’t changed all that much.”

Yungbluth would have his communications classes look at old dating classified ads so students could look at the patterns in each ad.

“Of course, once online dating became more prevalent, it was interesting to kind of look at what was present in terms of now we have pictures,” Yungbluth said. “Even back when Craigslist was popular… They were all text. Craigslist allowed you to write as much as you wanted.”

Yungbluth noted that Craigslist had its popularity, but people moved on to other dating sites such as Match.com and now Tinder.

“That’s not to say that technology doesn’t have an effect on how we meet and the outcomes that might result from that,” Yungbluth said.

“This is kind of what’s behind the curtain with these websites,” Yungbluth said. “The algorithms change over time, too partially because the users start to change… In some ways, the term ‘gameification’ is used. You’re gaming the system. You learn what the rules are and you work around the rules the best you can to get what you want in terms of your self-presentation needs and in terms of who you’re trying to attract.”

Because of some of the categorization in Tinder, it could be detrimental. For example, Yungbluth mentioned that a person who has a shaved head would have to put that he is bald even though he wasn’t balding, but he just shaved his head.

Outside of that, pictures are also a factor because they can be edited or angled to make the person look different.

“One of the things, I think the vast majority of people present themselves in the best light,” Yungbluth said. “‘I’m not going to use this photo because that would be stupid so I’m going to use a good photo and I might even touch it up a little because that’s not how I think I actually look’… People know, I think, based on the people we’ve studied and talked to… Whatever your goals are, if you’re meeting this person in real life there’s only a range that you’re allowed to deceive.”

Tinder can also have a different effects on women or men.

“One of the things, if you looked at the research, you’d find that women do tend to adapt their presentation more than men do,” Yungbluth said. “So what does that mean? Women tend to adapt to what men are looking for and men adapt to, ‘This is who I am, take it or leave it’ type of thing.”

Yungbluth said that this can be taken as women have more social emotional intelligence than men. He noted that someone could spin that as women being dishonest, but in a way, they are still being honest with how they feel.

Hubbard felt that women do act differently on Tinder in their presentation and that it does affect them.

“Girls are more judged,” Hubbard said. “Tinder is not supposed to be a hook-up app, but we all know on the downlow that Tinder is a hook-up app. We’ve always been more judged. I’ve always been an open person about my sexuality. But a lot of girls aren’t like that and the idea of being judged is so heavy on somebody’s mind. I feel like it’s a little bit hard for girls.”