More than just a costume: The art of cosplaying

From Halloween to dress-up games, people have loved the idea of becoming something other than themselves, even if only for a little while. This idea carries on through the art of cosplaying.

By definition, cosplaying is short for “costume playing” and is a performance art where people dress up as their favorite characters from pop culture such as video games, TV shows and movies.

But for a cosplayer, this means so much more.

Cosplaying is different for every person involved.

“Cosplaying varies from person to person,” Junior BA studio art major Hannah Kerner said. “It’s kind of dressing up to have fun and hang out with friends.”

The art of cosplaying is mostly seen at conventions. Conventions that are fairly close include Ohayocon and Colossalcon. For a longer list of conventions, check out animecons.com.

“At conventions, it makes sense,” sophomore media informatics major Dustin Wheat said. “I’m actually getting into shape to be Captain America at the end of the year.”

“It depends also on what you’re cosplaying too,” Koehler said. “For this cosplay, (dressed as Scarlet Witch) I can get up at 8 o’clock and be done well within an hour, hour-and-a-half. With some of my other cosplays, I have to get up at five in the morning and take three hours to get it done.”

After getting ready, cosplayers can get pictures taken and also visit dealer rooms where people can buy key chains, jewelry, art and other merchandise.

“Think of it as a Hot Topic, but ten times better,” Koehler said.

Plushies are also a huge deal at conventions.

Before attending a convention, there is some prep time involved with figuring out what to cosplay. This, again, varies from person to person and the type of cosplay.

Kerner and Koehler recommended using Amazon and EBay as places to find the best costumes and props.

However, thrift shops can also offer options for costumes, especially for someone first starting out in cosplaying.

Both Kerner and Koehler encourage new cosplayers to get into it.

“Don’t think you’re terrible,” Koehler said. “Just don’t do that. Everyone starts off horrible. My first cosplay was awful… I’ve gotten better, I’ve improved. Don’t sit there and compare yourself to someone who’s done it for ten years.”

Kerner noted to take finances into account and to shoot for a simpler cosplay.

Koehler and Kerner’s early cosplays came from an anime called Hetalia. From that, they have done characters from Gravity Falls, Legend of Korra and Danny Phantom.

The most common cosplay this year at conventions is from a newly released video game called Undertale.

“I really like representing the character,” Kerner said. “And I like putting love and effort into my costumes and seeing people’s reactions to them.”

Among the fun and finding friends, there have been negative experiences when it comes to cosplaying and conventions.

For example, Kerner had an experience where a large man in all black blocked her only exit demanding a hug.

At the time, there was a trend going around where people would wear cameras that would video the hug and have a clear shot at a woman’s cleavage.

“I tried to move under his arms,” Kerner said. “I gave him a quick two second hug, ran outside and tried not to have a panic attack. He was dressed all in black and I couldn’t see his face.”

Koehler agreed that this experience does happen a lot because some costumes are revealing and people take advantage of that.

Some experiences include disrespecting others’ costumes or taking pictures of girls as they walk upstairs in skirts.

Because of these situations, there is a new movement called “Cosplay does not mean consent.” According to Kerner, conventions are actively supporting this movement.

Koehler wanted to stress that men can experience this too.

Convention goers can go to security for help.

Despite that, those times at conventions and dressing up can hold some of the best memories.

Kerner said that her favorite general experience is when people say to her that she does a great job at representing any character. She also mentioned that she loves meeting up with other people from the same show or video game she is cosplaying as.

People asked her for photos the entire day which she enjoyed until it became too much.

Anyone can get into cosplaying and start attending conventions. Kerner and Koehler even began somewhere before they became active cosplayers.

“I just thought they were really good Halloween costumes,” Koehler said. “Oh no, it actually does have a name.” 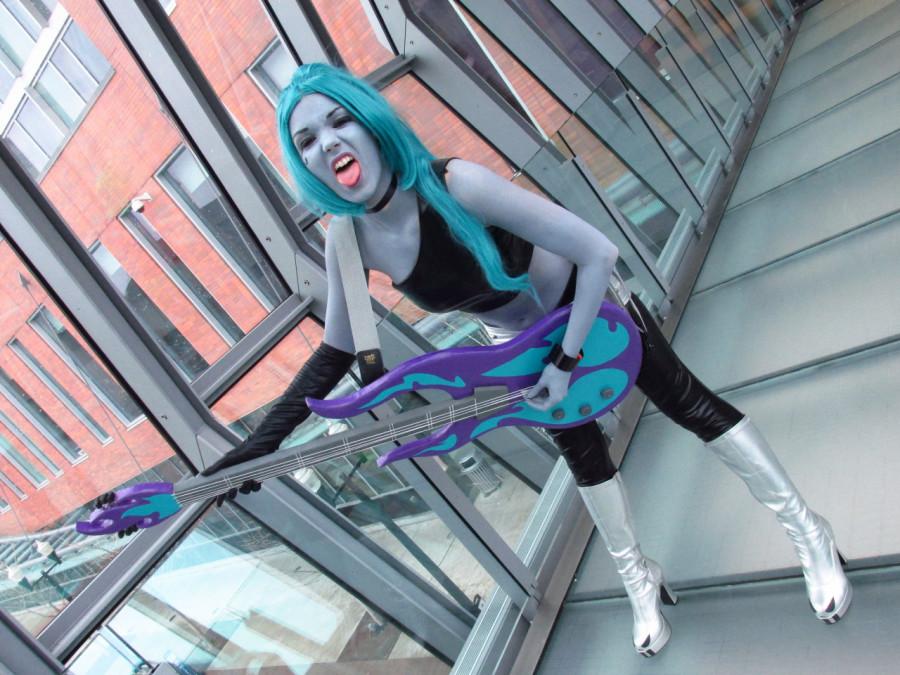 Gallery|8 Photos
Provided by Kat Koehler
Koehler is portrayed as Ember from 'Danny Phantom'. Props are often used in cosplays such as her guitar.