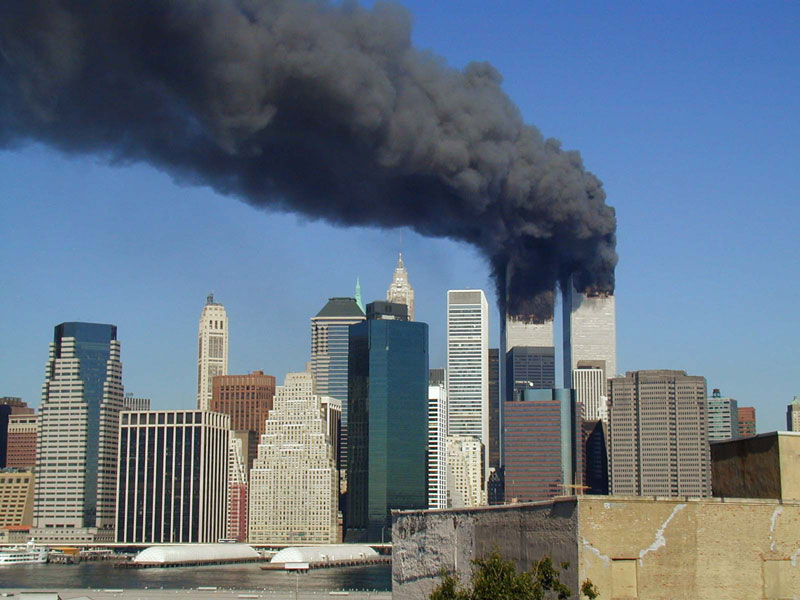 It was a morning like so many before outside the studios of Southwest Ohio Broadcasting in Wilmington, Ohio.

I stood on the porch of our building, which looked more like a house than a professional radio studio. I felt the cool morning air as I inhaled the second-hand smoke of my friend and colleague, Jerry Jennings.

Jennings was the host of the morning show at WSWO, 102.3 FM – Clinton County’s Kickin’ Country. We stood where we often did on this Tuesday morning.

His show ran from 6 to 9 a.m. on weekdays, and I had recently gone from just giving news updates to joining him throughout the show. Our last segment usually ran until about 8:50 a.m.

Once the segment ended, we headed outside for our daily debrief from the day’s show. This usually lasted 15 or 20 minutes. He would smoke and tell stories, and I would listen.

On this particular Tuesday, Sept.  11, 2001, we hadn’t been outside but for a few minutes when our station’s secretary rushed out the door.

She told us we needed to come see what was going on on TV. She said we were under attack.

Jerry and I raced back into the building. He went straight for the television while I went to grab a notepad from the closet known as my office.

When I arrived, we saw what had happened. The World Trade Center towers had been hit, and the rumors had started that it was an act of either terrorism or war.

As I was frantically taking notes on what I saw on the television, Jerry raced by me and sprinted back down the narrow corridor to our studios.

I grabbed what notes I had and sprinted that way. By the time I hit the door, he was ready to break into programming. He grabbed our news sounder – an 8-track tape with our news theme burned onto it – and smashed it into the cart machine.

Once that music started, the next few hours almost seemed like a blur.

Jerry was already a veteran of the radio business, having worked in several markets before Wilmington. I was 22 years old, a college dropout with a love of radio.

On that day, we were both equal in our experience. Neither of us had ever dealt with such an incident before, but we both knew we had to do what we could to keep people informed.

This was 2001. Cell phones were not what they are today. The internet, which was still growing, was completely jammed by people racing online for the latest news. It would be no use to us on this day.

We had no choice but to rely on television reports and later satellite news feeds for the latest information.

Once I finished the initial report on the FM side, I had to dash around the corner to our AM station, WKFI. I interrupted the Solid Gospel satellite feed that was playing and gave the same update to our AM listeners.

Everyone in the building became my news staff for the day. They would run into the studio and hand me updates as they received them. I spent the next few hours racing back and forth from FM to AM giving updates.

We received messages from the community, telling us that we were their only source of news at work, and that they appreciated the updates.

One of the updates we had received was from the wife of our former news and sports director, Bill Liermann. His wife informed us that Bill was in Washington with a farm conference, and she hadn’t yet heard from him.

So we tried our best to reach out to him. Eventually, he called us. I interviewed him from Washington as he described the chaos on the ground. It was a relief to finally hear from him.

It wasn’t until 5 or 6 p.m. when I was finally able to take a deep breath and finally process some of what was going on. For 10 hours, I was almost in a trance, just continuing to work and report without really being able to grasp the situation.

There was so much uncertainty in those hours that followed. Would there be more attacks? Was it safe to drive home? Who would do such a thing?

Even looking back on it now, the whole day seems like a terrible nightmare, almost like it didn’t even happen. You feel for all those who lost loved ones on that day and are grateful for those who put their lives on the line to try to save as many people as possible.

It was a day I’ll never forget.