‘Encore, Encore’ weaves a tale of humor and horror 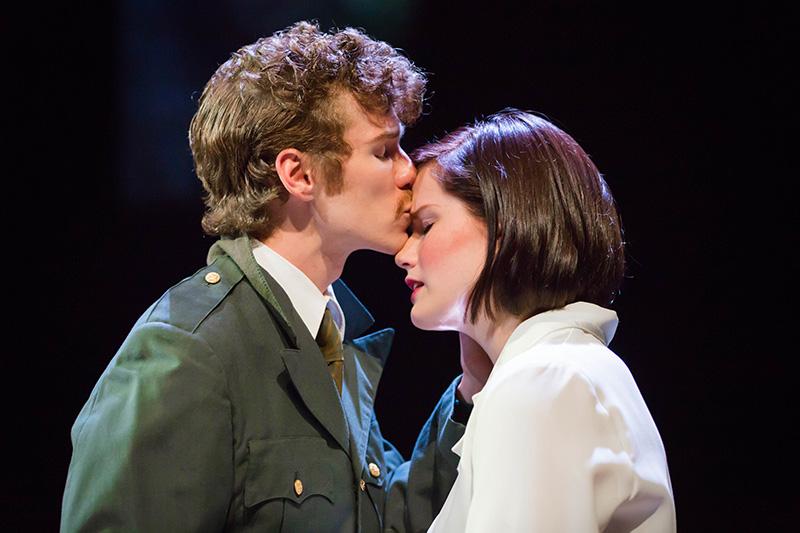 Dorothy Parker’s quick wit, silver tongue, and harsh criticism made her one of the greatest voices of the early 20th century. Behind her rough exterior, however, lied a tragic, tormented soul that wanted nothing more but to leave behind her home life. This is “Encore, Encore.”

The play immediately starts with our protagonist Dorothy Parker explaining herself, shattering the fourth wall for her patented comedic effect. Senior BFA Candidate Victoria Hawley expertly brings Dorothy Parker’s story to life, with an absolutely captivating performance that equally captured both her sense of humor and sense of tragedy.

Playwright Colin Speer Crowley does a wonderful job of guiding the audience through Parker’s life, touching on the many facets of early 20th century life. It was America’s first taste of war on a global scale, and the toll that combat took on the brave men in The Great War was not brushed aside in “Encore, Encore.”

Hunter Henrickson plays the jovial Edwin “Eddie” Parker, Dorothy Parker’s husband. It’s through his experiences we see the horrific scars war can leave on a man years after the fact. It’s Eddie and Dorothy’s relationship and personalities that truly sets this play apart. They’re both sharp, quick-witted cynics that end up torn apart by the horrors of war in different ways.

Tonally, “Encore, Encore” goes back and forth, but it never feels confused or rushed. Dorothy is always quick to make a clever retort or double entendre, even in the most dire of situations. There was always an ever-present feeling that beneath the humor, charm, and wit, there were dark feelings and emotions right behind it – as if the terrible situations Dorothy faced had to be masked by her critical persona.

Connor Moulton and Andrew Wiemann do a great job of humanizing Dorothy Parker’s friends Robert Benchley and Robert Sherwood. These people are with Dorothy through thick and thin, despite starting out on shaky grounds. Their back and forths are nothing short of hilarious and even when things appear bleak for Dorothy, Robert and Bobby are there for her.

Friendship is something that comes into question in “Encore, Encore,” as Dorothy occasionally questions who she really has in her life that doesn’t just follow her newspaper persona. The friendships she forges with people you wouldn’t expect to be able to hold a conversation without slinging insults come across as a rather genuine.

The overall plot has a tendency to hop around from time period to time period. At times, it confused me when a certain sequence would occur in the timeline of the entire play, but by the end all of the plot points were honed in and made perfect sense. Characters would cross paths in different periods, making emotional impacts later in the play hit even harder.“Encore, Encore” feels like a great start to NKU’s Y.E.S. Festival, offering both the hilarious and harrowing escapades of one Dorothy Parker.