‘The Divine Visitor:’ a tale of time travel and deceit 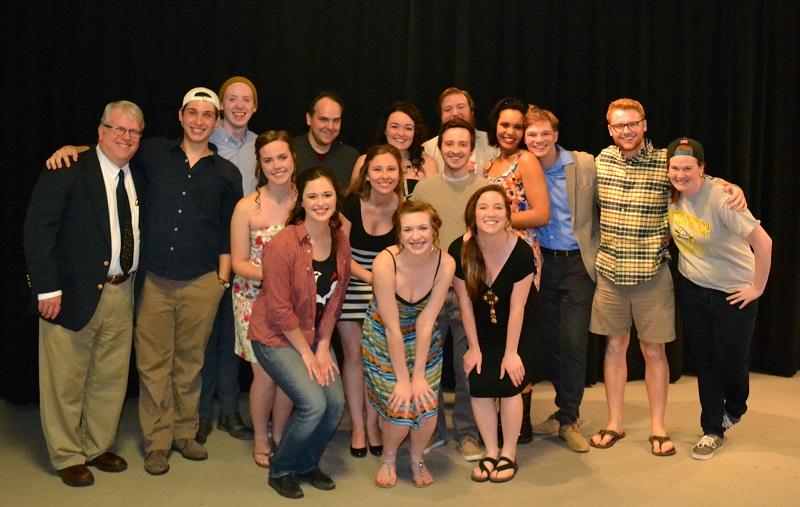 The original cast of The 'Divine Visitor'. The show will run until April 26.

Picture this, it’s 1665 in a small town in England where inhabitants are plagued with emotional turmoil and social oppressions similar to those at the turn of the 21st century. After the return of an unexpected guest and the arrival of an archangel from present day New York City, the town has changed forever. There comes social and political reform, a new wave of progressive thinking, and newfangled questioning attitude about religion.

Playwright David Williams was keen to spruce up the idea for a restoration play with a new way of thinking about society’s progression in the past few hundred years by introducing somebody from the present day into the plot.

A sell out crowd chuckled and awww-ed their way through William’s world premiere and second Y.E.S. Festival appearance in the Stauss Theatre at last night’s opening show of “The Divine Visitor.”

Miss Mackenzie Wells, played by the upbeat and spontaneous senior McKynleigh Abraham, encourages progressive thinking among the players in the town. She encourages them to accept homosexuality, urge feminism, and inspire oaths of true love.

“The Divine Visitor” is set in an old English pub owned by sailor turned innkeeper Mr. Walter Wren whose lovable and tender character is wonderfully played by senior Noah Berry.

“I really appreciated Noah Berry’s character, I liked the dynamics of not receiving anything for much of the play but being content with it,” Cody Opel, junior BFA musical theatre major, said. “In the end he received the ultimate prize of time travel. Whaaaat?”

When the charming Mr. Samuel Whitestone, played in a respectively quick-witted manner by senior Wes Carman, fakes his own death to escape his financial liabilities he learns of the townswomen’s true feelings toward him. He collaborates with his good friend Walter to convince the townspeople that he has returned to 1665 England as an angelic figure devoted to filling the cavity he’s left untouched whilst still living.

Fooled and gullible Mrs. Catherine Birch, played with a soft and amiable tone by senior Jennifer Rhodenhiser and a sassy yet similarly gullible at times Mrs. Cecily Lightfoot, played with zesty confidence by junior Hallie Hargus, are amongst the misled women with whom Samuel convinces he is the one who shall offer them his holy spirit.

In act II we see the spotlight on the archangel Mackenzie. Mackenzie is a conventional New Yorker who helps the townspeople through 21st century issues such as Constable Alden’s alcoholism or closet lesbian schoolteacher Mrs. Margot Ramshaw, played respectively by senior Andrew Bishop and senior Ally Mellick.

In the midst of all of the angelic revelations in the town uncertain about his vocational commitments Reverend Soundfourth, played accurately unsure of his standing in the town by junior Clayton Winstead, is left out of the loop of outrageous events that unfold throughout the two and a half hour show.

“There’s been stories about time travelling where somebody comes from the past and teaching us how to behave, but I thought what could somebody from the present offer people from the past, beyond technology things, what kind of human things could they offer?” Williams said.

The audience enjoyed sporadic present day references throughout the show in a witty new take on a restoration play.

“I think the show was really clever, the performances were really dynamic from the actors.It’s some of the best work I’ve seen out of many of them,” Charlie Roetting, adjunct professor of theatre and performance said. “I was glad the opportunity was here for some newer faces and for some more seasoned actors who’ve been around for a while to get involved in this. It’s a great script and I’m looking forward to seeing the rest of the shows.”

Having featured in the Y.E.S. Festival two years ago at NKU with “Spake”, Williams was confident that his play would be done complete justice again under the direction of NKU performance professor Mike King.

Williams also had a lot of faith in the talent of the students at NKU.

“I knew that there would be the resources here at NKU for a set, the costumes and the talented students,” Williams said. “The cast was fast and funny. Comedy can be difficult. if you try too hard with it, it kind of dies a little bit.”William’s The Divine Visitor runs until April 26. For a schedule of all the Y.E.S. Festival show times click here.