Editor lists his favorite releases of 2014 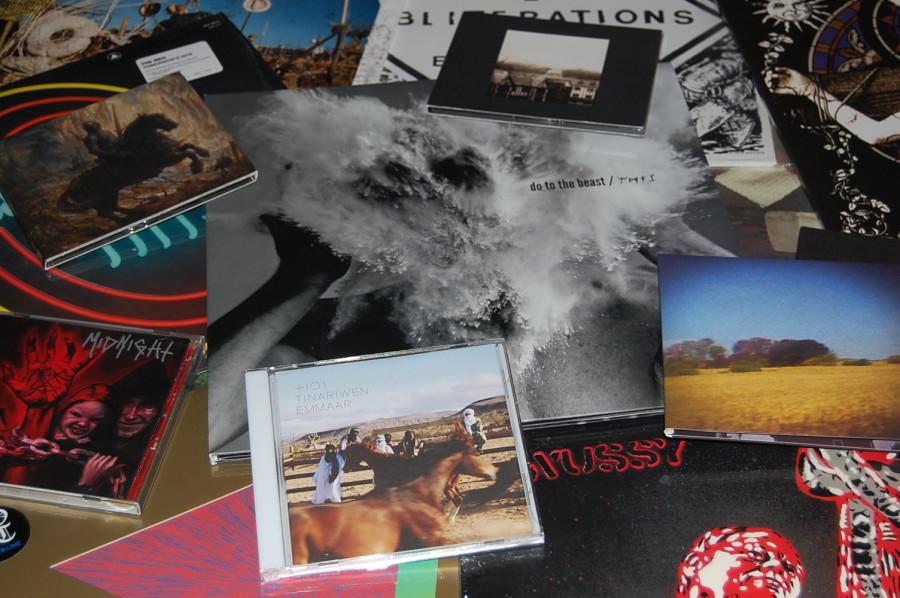 A pile of records before getting filed into my collection.

During one of the free hours I had over spring break, I began to file the new releases of 2014 into my collection and I started compiling and editing my list of favorites. This is never an easy thing to do. What separates one great release from being ranked above another? Either way, here it is.

I had a difficult time placing this one on my list. I have only owned it for about a month and after spending some time with it I think it could have put it higher on the list. However, here it is. Maybe I’ll update this list later. I’ve gotten immersed with this album since picking it up. It has a sloppy almost lo-fi quality to it similar to Sly and the Family Stone’s ‘There’s a Riot Goin’ on’. This is getting a lot of talk currently, but deserves it.

She has a gorgeous voice that melts with the gorgeous melodies all over this record. These folk indie inspired tunes of heartbreak will pull you in before you are even aware what’s happening. She has been on a roll since 2012’s ‘Tramp’.

New Orlean’s sludge legends return with their first album in 14 years. Despite the passing of original drummer Joey LaCaze, whose drumming is on the record, there is an energy and drive to this one. For any fan, this is a welcome addition to the Eyehategod catalog and possibly even a good place to start for those curious about the band.

While Wovenhand is known for their creepy southern gothic brand of folk this release has some more driving distorted moments. It is full of David Eugene Edwards’ passionate fire and brimstone vocals. This is definitely one of their best albums in several years.

6. Merchandise- ‘After the End’

This is the first album I’ve bought by this group. A good friend of mine has been trying to get my into them for years, but it just didn’t happen until now. He is a smart man and I should have been listening to them years ago. Merchandise have a lot in common with Manchester groups of the 80s such as The Stone Roses. It has nice bittersweet quality to many of the songs like The Church too.

Obliterations have a reverence for old hardcore. It shows in the excitement and energy contained on this disc. They aren’t completely reinventing a genre with this release, but it sounds very fresh, contagious and absolutely has their own unique dirge to it. I spent countless hours banging my fist on the steering wheel to this in traffic. The slower Black Flag style numbers are a nice touch.

Before I type a word about this record I have to say that anyone who hasn’t seen Lee Bains live must cancel any plans and travel any distance to make this happen. You will be ordering a PBR and singing along before the end of the first chorus. This is southern rock done intelligently and with barrels of passion and sincerity. Bains and the Glory Fires have been touring constantly. They played MOTR twice last year and are returning this April.

This took several listens to grow on me despite being a huge fan of his solo work, Husker Du and Sugar. This definitely is the darker half of Mould’s return to guitar-oriented rock when compared to 2012’s “Silver Age.” There were moments that grabbed me immediately like “Tomorrow Morning,” but it took several listens for the whole thing to click. Once it got under my skin it didn’t leave my turntable for a week.

Sorry, I am not allowed to type dirty words, but you get the picture. While there is obviously a certain amount of shock with the title, it perfectly sums up the mood of the record. This one is filled with original nasty riff after nasty riff that blend in with some surprising hooks. This is a juggernaut sledgehammer tossing truck of aggression that runs over most other so called aggressive bands.

Their first new album since 1998’s ‘1965’ is a welcome addition to their catalog. I would love pretty much anything that this group released. If this were an album of them improvising an opera, it would still crack my top ten. However, this is really, really good. It seems to me like a natural progression the work singer, Greg Dulli, has been doing with his other group The Twilight Singers, while still incorporating some of the aspects that made soul drenched rock outfit The Afghan Whigs so great.

Wolves in the Throne Room