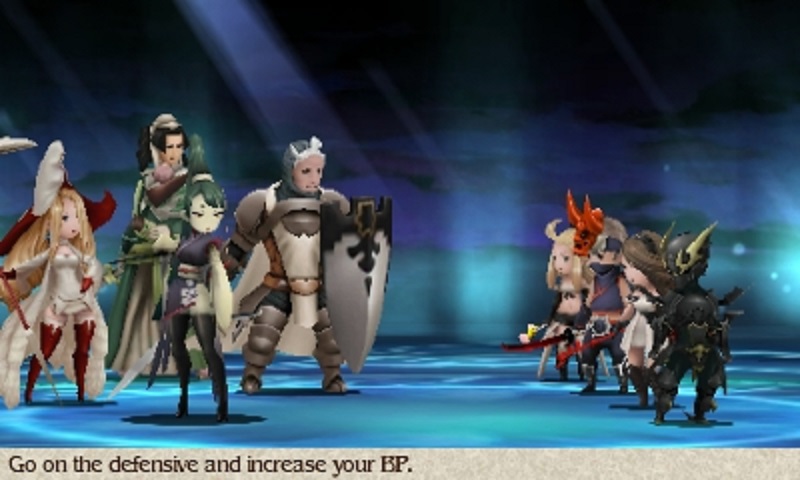 When I was a kid, my absolute favorite game was Final Fantasy 6 (or Final Fantasy 3 if you played the Super Nintendo Entertainment System incarnation of the game). From the story to the battle system, the game seemed to get everything spot-on and even now defines what makes a good Japanese Role Playing Game to me.

In the years since, SquareEnix, formerly SquareSoft, had lost much of its luster — to the point that I practically lost faith in them around the time that Final Fantasy 13 came out. However, recently I picked up one of their newer titles, Bravely Default, and was completely blown away by it. It was familiar yet innovative and, for the most part, I was captivated all the way though. The storybook-style art assets and soundtrack all scream epic adventure.

Honestly, the story isn’t too special. If you’ve played Final Fantasy 3 or Final Fantasy 5, Bravely Default won’t present any new story elements to you. You collect a party of four and travel across the world awakening crystals and stopping the evil empire. All of that is pretty standard fanfare for an early Final Fantasy title. The story takes you to some rather dark places at times and it does try to throw in some curveballs. However, everything the game has to offer story-wise are already pretty well-defined tropes in the JRPG genre. It gets a little repetitive towards the middle, but the ending is well worth it and makes a great opening for its sequel, Bravely Second.

This is where the game truly shines. The most obvious feature the game adds to standard turn-based combat is its Brave and Default system. Default replaces what would normally be the Guard command in a JRPG, but it has the added bonus of giving you a Brave Point. You can stack up to three Brave Points on a character, and that’s where the Brave command comes in. It allows you to take multiple actions on a single turn and you can even use the Brave command when you don’t have points at the cost of making the character stay inactive for a few turns.

This is an incredibly simple mechanic, but it adds so much depth to battles. You can launch an all-out attack on the first turn or you can stay back and wait until you have the perfect chance to strike. This also makes random battles much quicker. Never once did I feel annoyed by the random battles, which is a flaw I’ve found with so many other JRPGs. If you don’t feel like fighting random battles, you can even shut them off in the settings menu.

The second most obvious feature the game has is the return of the job system that was seen in Final Fantasy 3 and Final Fantasy 5. The game has 24 job classes in all and, unlike other SquareEnix titles that use job systems, none of them felt useless to me. For example, I’ve never used the Ranger class in any other job system game before, but I kept on on my team for most of this game. Bravely Default even allows you to use skills from classes that you’re currently not using to let you feel like you’ve made a team perfectly tailored to your tastes.

Some minor things that Bravely Default adds are the special moves, which deal tons of damage and give your characters temporary stat buffs, a mini game that requires you to rebuild a town but in exchange allows you to buy the most useful items in the game and SP Potions, which allow you to take an extra turn in battle whenever you want. The SP Potion is actually one of my only gripes about the game. You can get them either by putting your 3DS in sleep mode for eight real world hours (which I can’t do because my system is old and will shut itself off when I try to take it out of sleep mode) or you can buy them with real money. Microtransactions like that are a huge pet peeve of mine and, while I never actually used the one the game gives you for free, it left a bad impression with me.In short, Bravely Default does so many things right. It makes you think about how you want your team to function in battle and it feels so rewarding when you find a winning combination. Simply put, it’s the best game SquareEnix has released in years.