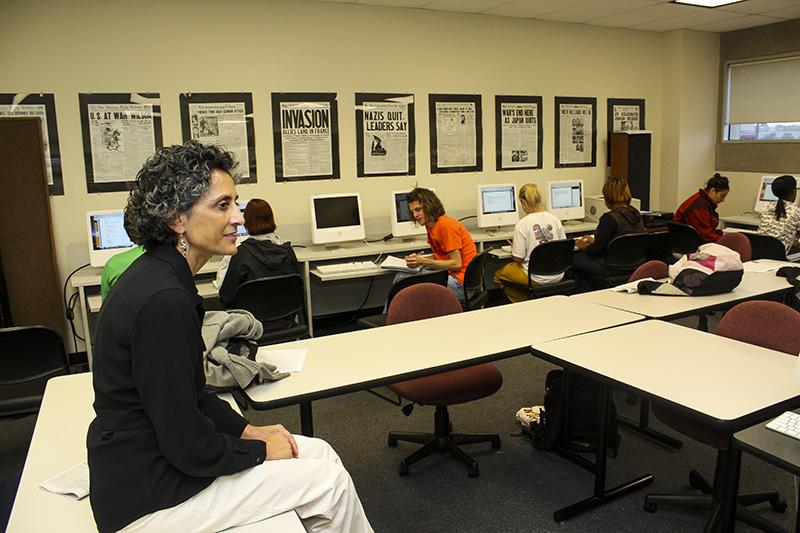 Mary Cupito delivering a lecture. She was a beloved professor and member of the journalism department.

I speak for myself and my family here at The Northerner when I say that we are mourning one of our own. Mary Cupito, a journalism professor, passed away after a long struggle with cancer.

It’s a common misconception in The Northerner office that I began my journalism career here, but that’s not exactly true. My first publications were in the Kentucky Enquirer as a community columnist.

When I applied for the position, I didn’t tell anyone about it. In fact, most of my friends and family didn’t find out that I got the position until my first column was published. I didn’t think that I had a reason for it at the time, but looking back I didn’t want to feel like I let anyone down if I didn’t get it.

Since I hadn’t told anyone about the column yet, I was a little surprised when she sent me an email congratulating me on being chosen. At the time, I was panicking over being chosen. I was scared that I was going to make myself seem foolish or that I wasn’t going to have anything to write about. It felt like I was standing on the edge of a strange new world, excited about the opportunity and terrified at the same time. Having no one else to turn to, I told Mary about how I felt.

A few hours later, Mary sent me another email. I’ll never forget what she said to me. She told me to be myself and write things that my friends and I would enjoy, but what really stuck with me was when she said “You were chosen because you obviously have a personality, have a viewpoint that most Enquirer readers have no concept of, and are a good writer.”

If Mary hadn’t said what she did, I don’t think I would still be writing or even if I would have started at all. More often than not, I don’t believe in my own abilities and underestimate myself.

What Mary said to me gave me the courage to do something that I didn’t think I was ready for. She sent me that email two years ago and I still haven’t deleted it. I probably never will.