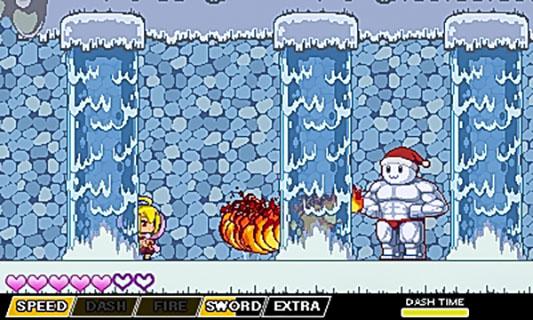 'Dark Witch' features a variety of enemies, such as this fire-breathing snowman.

Lately, I’ve been playing a lot of action/platformer games. Of course, I replayed some of the early Mega Man games, as well as some newer titles like Azure Striker Gunvolt. There’s just something about running, jumping and shooting on a 2D stage that’s addictive.

One of the games I picked up was a 3DS download title called The Legend of Dark Witch, which proved to be just as fun and challenging as old school Mega Man. The game was published by CIRCLE Entertainment back in October and I still find myself going back and playing it about once a week.

The game has you playing Zizou Olympia, the dark witch, who is on a mission to retrieve stolen Syega Crystals (shards of physical magic that humans can use). The story itself is pretty superficial and doesn’t get in the way much during gameplay since all dialogue is skippable, but that’s basically the gist of it. Each stage is Zizou tracking down a new lead. The bosses aren’t really working for the main bad guy, but beyond that it pretty much becomes a Mega Man clone  After beating each boss, you gain their power and each boss is weak to another boss.

The final stage features a boss rush before fighting Princess Riva, who stole the Syega Crystals pretty much because she could. Given the difficulty the game featured to this point, Riva was kind of a let down. Her first form’s attacks are easily dodged and her second form slowly loses health rather than you attacking her and she only hurls minor enemies at you as an attack. After beating Riva’s first form, Zizou reveals that she’s a god rather than a witch, which really doesn’t seem to have much to do with the story, one of my complaints I have with the game. It just felt tacked on.

After beating the game as Zizou, you have the option to play as Riva. The only difference with her story is that Zizou is the main boss, and she can use all the bosses’ attacks. Riva is definitely worse to play than Zizou. Her main attack only has a limited range and it’s much weaker than Zizou’s. While playing as Zizou, I pretty much only used her main attack, but I had to use the bosses’ attacks when playing as Riva.

The main difference I noticed between The Legend of Dark Witch and Mega Man was that Dark Witch has something called enforcement slots. Whenever you kill an enemy, you get something called Tres, which you can use to upgrade your character. During levels it goes into your enforcement slot and can power up Zizou or Riva’s standard attacks. This is actually really cool because it feels like you’re progressing as you make your way through the stage.

However, this kind of turns against you when you play on any other difficulty other than easy. The game also has a normal and lunatic mode. Easy alone is already pretty challenging, but the other two are straight up unforgiving. Normal and lunatic remove health drops and enemies take more damage. On top of that, if you get hit or die in normal, you lose 50 percent of your enforcement slots; in lunatic you lose all of it. Bosses pretty much become a “stave off carpal tunnel as long as you can” contest, but despite all of that, I don’t think that makes this game bad by any means. It just provides a challenge for every skill level.

To sum things up, The Legend of Dark Witch is a fun, short game that has nice graphics, catchy music and will most likely provide any gamer with a challenge.