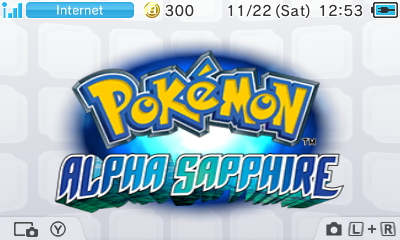 'Omega Ruby' and 'Alpha Sapphire' were released on Nov. 21. The games are set in the Pokemon world's Hoenn region.

The first thing I did after leaving school on Friday was pick up my pre-ordered copy of Alpha Sapphire and I pretty much played it nonstop over the weekend. Currently I’ve beaten the first five gyms and I thought I’d share my thoughts so far.

To me, a good remake should strengthen what was good and fix what was wrong with the originals. It should also bring more depth, mechanics and character to the story while invoking nostalgic feelings in the player. So, let’s begin.

At the core of every main series Pokemon game, you beat up a ton of trainers, gym leaders and gang members in order to be the very best. However, as the generations come and go it becomes more complex. The new expansions in the series carry a heavy message of friendship and never backing down from a challenge. Omega Ruby and Alpha Sapphire take this a step further through their characters.

I felt a real connection with Wally, the sickly kid who just needed a little help to become someone great, and Flannery, the new gym leader of Lavaridge terrified of failing. I didn’t feel connections with any of the characters in the originals, but they’re certainly in these retellings. Every character seemed fleshed out and relatable and it made me want to keep playing even though I knew how the story would turn out.

The rival character plays a more important role too, which I really liked. Ruby and Sapphire were the first games to introduce a friendly rival, and they felt like a pushover in the originals. You only fought them a few times in Ruby and Sapphire and they were underwhelmingly easy at best. They were also missing from most of the main story. While your rival in Omega Ruby and Alpha Sapphire is still very easy, they’re around more often. They even helped me fight Team Aqua once. It made me feel like I wasn’t the only good guy doing something in the story.

As I said in my review of the demo, Team Aqua and Magma have more personality than they did before. When I fought Archie, the Team Aqua leader, on Mt. Chimney, I found myself chuckling at some of the things he said. He’s much more humorous and animated than he was in the originals. Maxie, the Team Magma leader, is calculating and smug. He makes me wish that I picked up Omega Ruby instead so I could beat him up.

Personality traits that the gym leaders had in the originals are ramped up now too. Not to give too much away, I’ll just focus on Norman, the player’s dad and fifth gym leader. Everything about his gym and the way he carried himself as a leader was symbolic of passing a great trial and the dynamics of the parent/child relationship. After I defeated him, I was treated to a really touching scene where Norman and Wally’s dad connected as fathers.

Omega Ruby and Alpha Sapphire incorporate mechanics from X and Y and they only benefit from it. Features like PSS, Pokemon Amie and Super Training make a return. The most interesting by far the sneaking mechanics unique to the games. Using the Pokenav, you can detect Pokemon hiding in the tall grass and creep on them. They often have moves that the ordinarily cannot learn through leveling up. This is really great, way to further immerse the player into the game, but it gets a little annoying at times. These Pokemon popped up a little too often for me. It’s true that you can just ignore them, but seeing their shadows and hearing their cries distracted me from what I was doing a lot.

Speaking of the Pokenav, Match Call doesn’t seem to be in these games. In the original versions, it was used to rematch trainers and gym leaders. I don’t know if they have something that works similar to it yet, but not seeing Match Call made me kind of sad.

Mega stones are available before beating the game and before you can even mega evolve. So far, I’ve found mega stones for Steelix, Aggron, Mawile and Manectric. The man in Rusturf Tunnel actually gives you the Agronite when you clear the rocks from the tunnel. In X and Y, mega stones could only be found between 8 and 9 p.m. While I did find my first one after 8 p.m., I kept finding them long after 9. Also, while Steven mentions mega evolution when you meet him in Granite Cave, it doesn’t really show up again until after you beat Norman. I imagine it’ll pop up more later, but I like how GameFreak decided not to focus too heavily on mega evolutions in these remakes. I am a little biased on this though because I don’t really care for mega evolutions.

The gyms I’ve encountered so far are pretty great. Roxanne and Watson’s new gyms felt like natural evolutions of their original counterparts, but Brawley’s felt a little off. I think it’s because he traded out his surfer persona for a MMA-looking one. It just doesn’t seem to pair well with the setting Dewford town has. Even the Trick House challenges feel fresh and new.

Mauville City has been ridiculously expanded. It’s beautiful and really interesting to explore, but I kept getting lost. The maps scattered around the city only point out where the gym and bike shop are. I was a little disappointed that the game corner was put out of business, but GameFreak and Nintendo have been accused of promoting gambling in the past so I can understand why they didn’t include it. I think it’s also important to remember that the last game corner in a Pokemon game was back in generation four. Anyways, talking to the gamer corner owner will net you Treecko, Mudkip and Torchic dolls. There’s a lot of new features that are in Mauville now, but I don’t want to ruin the surprise for anyone who hasn’t gotten there yet.

Lastly, and this might be an oversight by GameFreak and Nintendo, but I think it’s worth mentioning: You can pretty much bring in any Pokemon you want through Pokemon Bank. I myself started off the game with a Porygon, Charmander and Treecko (it wasn’t my starter), who were all leftovers from IV breeding sessions. A friend of mine said she planned on using this to collect all the starters. It doesn’t take away or add anything from the actual game, but I felt like I should say something.

In summary, I think that GameFreak kept the original Ruby and Sapphire as well as the players in mind when they were making Omega Ruby and Alpha Sapphire. The story is expanded and more engaging, the characters are more relatable and they brought back a lot of nostalgia for me.