‘Gunvolt’ could be this generation’s ‘Mega Man’ (SPOILERS) 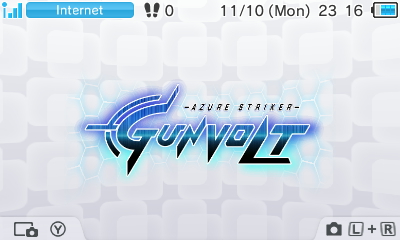 As I browse through the selection of games on the Nintendo 3DS’ eshop page, I’m realizing that there’s a lot of new 2D platformers out there. I’ve found a few that I really like, but none more so than Azure Striker Gunvolt. Since it came bundled with another game, Mighty Gunvolt (I think that deal ends on Nov. 28, though), I thought it would be worth talking about since Mega Man was so commonplace for a lot of our young lives.

You might be wondering why I liken it to the blue bomber. Well, Gunvolt follows practically the same formula. It has eight stages with bosses followed by a boss rush spread out between four more stages before a final boss. Sound familiar? It’s also worth mentioning that Keiji Inafune, the illustrator and co-designer of Mega Man, played a part in the production of this game. The game itself was published back in late August.

The game is set in the near distant future, without a specific date, and humans with special powers called Adepts, who are basically psychic humans, begin to appear. A conglomerate known as the Sumeragi Group took it upon itself to keep the peace and supervise the Adepts. However, when it’s revealed that they’re actually putting the Adepts in concentration camps, a group known as QUILL rises against them.

The opening mission has the title character Gunvolt, an Adept in his teens, on a mission to assassinate Lumen, a virtual diva created by the Sumeragi Group to control Adepts. Once he reaches her, Gunvolt finds that she is merely the persona of a young girl named Jouel, who would rather die than continue being used by the Sumeragi Group. Gunvolt then takes her with him, quits QUILL (but still does missions for them as a hired gun… kind of pointless if you ask me) and gets a secluded apartment for both him and Jouel to live in.

The story was more in-depth than I was expecting for a downloadable title. It beings pretty minimalist at first, but through Gunvolt’s interactions with bosses, other characters and his own internal monologues, the game does a great job letting you know what’s going on. I never felt lost in the story or like I was being fed too much information at once, which is a tricky balance to attain in a sci-fi/fantasy setting.

While the story was solid and immersive, the characters are what really made the game work for me. Jouel and Gunvolt clearly care about each other, and even start to have a brother/sister relationship. The bosses, who are members of the Sumeragi Group, ranged from comical, hardboiled and just plain weird. One of them wanted me to kill myself so he could go back to playing video games and another wanted to eat me. Excluding the main boss, the Sumeragi Group throws seven bosses your way, which I suspect are emblematic of the seven deadly sins. I can’t find anything to prove that’s true, but it’s a nice touch if it is.

One thing that I didn’t really care for was the game’s self-censoring. Whenever a character would swear, it would replace it with words like “jitt.” I’d imagine it was to give the game a lower ESRB rating, which it sits firmly at E10+. I don’t know what rating they were going for, but it really clashed with the overall tone of the story, I thought.

Another thing that clashed with the tone of the story was the game’s normal ending, which has the leader of QUILL, Azamov, killing Gunvolt and Jouel. When I went back to the mission select screen, Gunvolt, Jouel and Lumen acknowledged what had happened, but took a “maybe it was a dream, maybe it wasn’t” stance on the whole thing. As a player, I found that to be a sloppy way to tie up the story, and while the game’s true ending was satisfying, the normal one just left a sour taste in my mouth.

Like I’ve already said, the game’s formula is identical to that of Mega Man. However, while Gunvolt and Mega Man use some kind of firearm as their main weapon, that’s where the similarities end on their play style. Instead of being able to acquire enemy attacks, Gunvolt has a tagging system. How it works is you shoot an enemy to tag it, and then you can shock it to death with Gunvolt’s flashfield. It’s a satisfying way to dispatch enemies, but you have to be careful not to run out of electricity (EP) or else Gunvolt will overheat – making him more susceptible to damage. He is able to manually recharge and the game incorporates a level system to give you more health and EP, which gave me a feeling of improvement.

Another feature is the ability to modify Gunvolt’s weapon and equipment. New guns are acquired as you progress through the game and equipment can be synthesized with items you get at the end of each level. You can get some pretty useful stuff like mid-air jumps and air dashes by synthesizing new equipment. While getting specific items is often up to chance, I did think that this was a nice touch since I was never really hindered because I didn’t have a certain item.

On that note, some of the items you can equip offer something the game calls “prevasion,” which will subtract damage from Gunvolt’s EP instead of from his health. I’m not saying this is a bad thing, but it’s strange. This trivializes minor enemies and a lot of the time I found myself ignoring them instead of fighting. It comes in handy against the bosses, but it certainly makes the game easier than it should have been.

The game also has a grading system that ranks your score and time. Your rank determines how many items you get at the end of each level, and there’s also optional challenges that require higher ranks to pass them. I’ve never gotten a grade lower than a C, but they can go up to S+. There’s a combo system too, which can greatly affect your grade, but your combo disappears once you get hit. This can be really frustrating at times and can make the difficulty of the game skyrocket. Ultimately, I’d say that while the challenges can add more replayability to the game, they only give you synthesis items or cash and the more difficult ones ruined the game for me at times.

The gameplay itself is lots of fun. It has a much faster pace than any Mega Man game I’ve ever played, and it throws a lot of do-or-die situations at the player. For instance, there’s one level that begins to flood and being in the water disables Gunvolt’s flashfield and slowly drains his health. This section requires fast thinking and action and puts a ton of obstacles in your way. It’s easily one of the toughest sections in the game, but the feeling of accomplishment it gives makes it all worth it.

Something else worth mentioning is that whenever Gunvolt dies, there’s a chance he can be reincarnated with Lumen’s power. It allows him to perform infinite mid-air jumps, air dashes and he has an infinite amount of EP to expend. It also changes the music of the level to a J-Pop song sung by Lumen herself. From what I can tell, the chances of this happening increase the more you speak to Joule before a mission. However, it wreaks havoc on your grade for the level, so it’s not all great.

Just like every Mega Man game I’ve played, Gunvolt has an amazing soundtrack. I’ve never actually looked for a game’s soundtrack before playing this game, but I really want this one. Each level’s theme, from ambient water bases to fast-paced factories filled with lava (for some reason), embodies the atmosphere. I was a little disappointed that most of the bosses shared the same song, but I think that really says more about me wanting more tracks than anything else.

In addition to the level music, there are equip items called audiolockets that can be obtained. What they do is change the music of whatever level you play to a preset song… and that’s it. They’re obtained by reaching a combo of 3,000 or above in specific levels, and it’s extremely difficult. The audiolockets all play songs by Lumen, and while I absolutely love them I don’t think it’s worth getting them — especially since the songs are all on YouTube. Fair warning to anyone who wants to look them up: they’re all J-Pop. You now know one of my dark secrets, exploit it at your whim.

All-in-all, Azure Striker Gunvolt is a fresh spin on one of the oldest genres of gaming. Everything about the game screams vibrant and it’s a fun run-and-gun sort of game. There are certain levels and bosses that can be frustrating at times and some of the challenges aren’t worth the reward, but true fans of the platforming genre could see this as a gem in the 3DS’ repertoire of games.