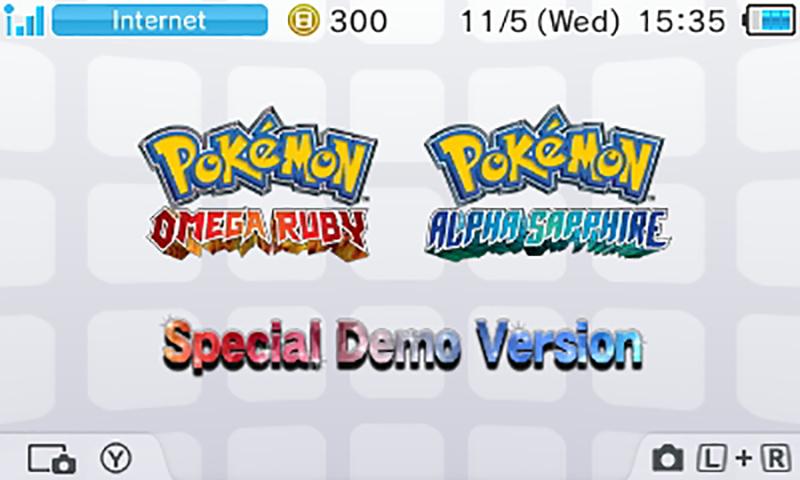 The demo is available through special codes. Nintendo sent out the codes last month via email.

Nov. 21 marks the release date of the new Pokémon games. Pokémon Omega Ruby and Alpha Sapphire are retellings of the franchise’s third generation games Ruby and Sapphire, complete with a more in-depth story and the inclusion of new mega evolutions.

I was lucky enough to play the demo for them, and that made me all the more excited for the games. Not only because Sapphire was my favorite installment, but also to see what new additions we’ll see in the Hoenn region.

The first thing I noticed while playing was that the criminal syndicates in the games aren’t just copy-pasted versions of one another. Right off the bat, you encounter two Aqua grunts with Devon Corp wunderkind Steven Stone. Their commentary and descriptions of Steven are hilarious.

The gang’s different personalities are highlighted further when you face off against Team Aqua admin Matt, who “loves funny guys” like his bro, Archie (the Team Aqua leader) and Team Magma admin Tabitha. Watching the banter between the two before and after the battle I had with them made me excited to see more of Matt, who is easily one of the most vibrant characters I’ve seen in a Pokemon game.

Music and the nostalgia factor

The demo’s central hub is Mossdeep City, which is where Steven lives. The music Gamefreak uses remains true to the original games while making it more modern, catchier. Having clocked in over 200 hours on my Sapphire version alone (yes, I was that kid), I was hit with a rush of nostalgia from when I was a kid in middle school fighting Team Aqua for the first time.

The battle music that plays when you fight a Team Aqua or Magma grunt does an amazing job breathing new life into the original theme. Having always loved the joyous tune that chimes when you beat the grunt, I had a goofy grin on my face when I heard it play on the demo for the first time. I think I must have listened to it for a solid two minutes after my first victory.

After beating Matt and Tabitha, Steven takes you to a patch of tall grass where you can catch a Glalie, a third generation ice-type who who was recently given a mega evolution. I heard that Pokémon fans in Japan had access to a Steelix, but that’s okay since I’m a sucker for ice-types. It’s at level 40 and has its mega evolution stone when you catch it. Even though I don’t particularly use or care for mega evolutions when I’m battling, I thought it was a nice touch that you have the opportunity to transfer it over to your copy of Omega Ruby and Alpha Sapphire.

Afterwards, the demo gives you the option to go on some adventures with Steven. The more adventures you go on, the more items you can transfer over to your game. I’ve gone on 10 adventures at this point, and I’ve gotten Pokéballs, Heal Balls and some Heart Scales. There’s supposedly an ever-coveted Nugget you can get, but I’m not sure if I want to put the effort into it. This is actually where the demo started to lose me. None of the battles were challenging at all since you have a Glalie, Sceptile, Blaziken and Swampert at your disposal and some of the adventures can be completed in seconds. There was one where I had to find a Pokémon that was only a few steps away from where I started. I like the idea of having more to do in the demo, but I wanted more of a challenge.

When I played the originals, I was blown away. The Hoenn region was so colorful and vibrant compared to its generation two predecessors. I’m happy to report that the remakes do the originals justice in this department. The games use the same graphics engine that Pokémon X & Y did, and paired with the vivid colors and landscapes of the Hoenn region it truly shines.

The 2-D character models used during battles are great too. They look remarkably similar to what each trainer class looked like in the originals, but at the same time they felt new. It was interesting to see what the Sailors, Experts and even the Team Aqua and Magma grunts up close and detailed. It really upped the nostalgia factor.

All-in-all, I’d say that the free demo was definitely worth the hour or so I spent playing it. I didn’t really care for the post-play adventures, but the items will be helpful when I play the full game. I think that game demos are supposed to ramp up the player’s hype for whatever game they’re promoting. This demo did that, but it also dug up a lot of memories I had playing the original games.