Skyline all day shouldn’t be your way

“Who wants to eat McDonald’s for three days like in Supersize Me?” Brook Clifford, our managing editor, asked The Northerner staff as we were preparing our healthy living edition of the newspaper.

Brook had grand plans for documenting the process: calorie-counting, a webcam diary, pictures, measuring blood pressure and even keeping track of the participant’s weight.

Unfortunately, no one was willing to take her up on the offer.

After several minutes I approached her desk.

“If it was Skyline for two days I would maybe do it.”

I was kind of excited too. If someone had asked me to pick one food to eat for the rest of my life I would have said Skyline Chili, hands down.

And so began my six-meal Skyline journey. By the end of it, the folks at the Highland Heights Skyline began to recognize me, I felt like I had gained at least five pounds and I knew it would be quite some time before I would eat another cheese coney.

12:30 p.m. My first visit to the Highland Heights Skyline was with my friend Nick. The place was surprisingly crowded so we sat at the counter to be served. I ordered three cheese coneys with mustard and onion– my go-to whenever I eat at Skyline. Nick, being the good friend that he is, paid for my meal so I didn’t have to use my budgeted $25. The service was so fast and I left feeling full and satisfied.

4:05 p.m. After my afternoon classes I went through the drive-thru and ordered a three-way with extra oyster crackers. The guy working the drive-thru was the same college kid who had made my coneys earlier in the day, but thankfully he didn’t seem to recognize me. Because I almost always order coneys, I hadn’t had a three-way in quite some time. I was really looking forward to it as I brought my meal down to the newsroom and I honestly wasn’t too phased by the fact that I had just frequented Skyline twice in the last four hours. Brook was happy to see me eating Skyline. It was delicious. 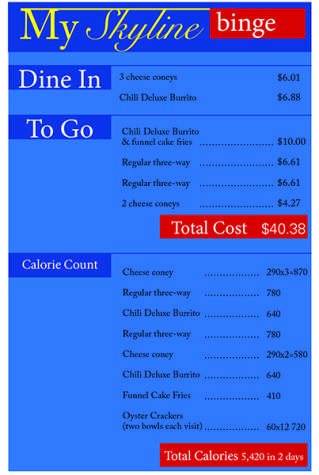 9:15 p.m. I dragged Carrie Crotzer, the Northerner’s sports editor, with me to Skyline for my third and final meal of the day. We chose a booth toward the back of the restaurant. The restaurant staff appeared to have changed shifts since my last visit because I didn’t recognize anyone. Dillon Wray, the Northerner’s assistant designer, had recommended the deluxe burrito as one of the best items on the menu so I decided to give it a shot. It’s basically a burrito filled with Skyline chili and topped with cheese, lettuce, diced tomatoes and a huge dollop of sour cream. It felt just a little healthier than the other two meals I had consumed that day, but I still felt stuffed. I wondered just how many ounces of Skyline chili were sitting in my stomach.

10:40 a.m. I’m almost positive I was Skyline’s first customer of the day as I pulled into the drive-thru to order a three-way for breakfast. When I awoke that morning, I had almost decided to abandon the Skyline challenge. Chili did not sound appealing whatsoever. But for whatever reason, I got in my car and drove to Skyline, marking my fourth trip in less than 24 hours. I took a selfie with the guy in the window, knowing that I would probably see him several more times. I told him about my Skyline endeavors for the day and he enthusiastically supported my plans.

1:00 p.m. I felt like a complete grouch after my morning classes. Even though I had slept a solid eight hours the night before, I felt a tremendous lack of energy. I attributed this to my full day of Skyline. I ordered just two cheese coneys Mo Asad
with mustard and onion because I wasn’t sure how much more my body could take. By this time I was definitely NOT in the mood for Skyline. The girl at the drive-thru was different than the man from that morning and was very friendly.

6:15 p.m. After the Northerner’s editor meeting, I made my final trip to Skyline. I was so happy and relieved as I pulled up the window for the last time. “Were you here earlier?” the girl at the window asked me. “Yeah, I actually was,” I told her. She smiled. “Well I like your dress,” she said awkwardly, probably because she didn’t know what else to say. She handed me the deluxe burrito and funnel cake fries I ordered as a celebration of completing my Skyline challenge. I headed back to my dorm where all of my neighbors were standing outside because of a fire drill in Norse Hall. At last I was able to return to my room where I ate my last meal in peace on my bed. Feeling pathetic and fat, I vowed not to eat anything the next day.

Five Days Later
I’m happy to report that this challenge did not completely ruin my love for Skyline. In fact, at this very moment, I would totally be okay with putting down a couple of coneys. I felt pretty disgusted with myself for a couple of days after my Skyline binge, but now I’m pretty much back to normal. I don’t know the effects of my binge on my blood pressure and weight, but I would still eat Skyline for the rest of my life if such a situation arose.