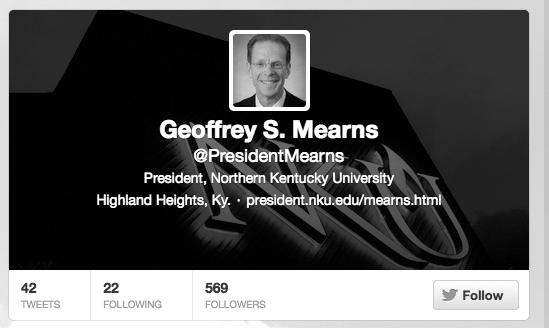 Northern Kentucky University’s president has joined the ranks of other university leaders in the Twitter-verse. Geoff Mearns sent his first tweet Jan. 11, in response to many students who tweeted him first, welcoming him to the social media giant.

Tweeting, Mearns said, is his way of becoming more transparent to students. In the first week, it seems to have worked. He has been re-tweeting photos and thanking students for the warm welcome, but followers haven’t seen anything too personal or academic-oriented yet.

Mearns isn’t exactly ahead of the pack, as other university presidents like Gordon Gee of Ohio State University and David Leebron of Rice University, have made a presence online for students and the university.

Patrick Powers, a higher education marketing and communication expert, said a president who embraces Twitter can personalize an institution in a way few other services can, and Mearns should think of his Twitter like this, too.

Students want to see a person behind the tweets, and know that it’s really him. Sure, it’s not easy to stay professional and still be personal. If Mearns can strike that balance and build a prominent following, there is a good chance that Twitter will work to NKU’s advantage, possibly putting the university on the map in a way that hasn’t been done before.

Some ideas and suggestions for fun tweets? Photos that let the campus community know what’s going on at conferences, in meetings and at athletic events. Offer a peek into family life or personal interests, such as music, movies, running and even meals that can be connected to academic life in some way. Of course, don’t neglect the university, but keep academic-focused tweets interesting so students start re-tweeting and continuing to spread the word.