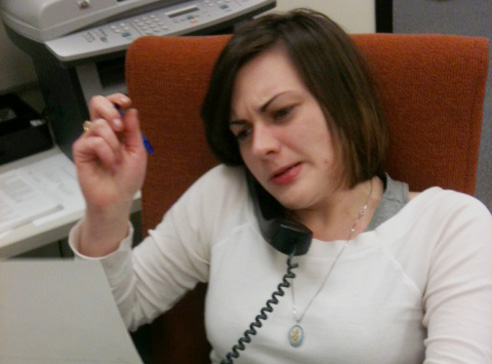 Finally. It’s that time. I’ve gone through countless panic attacks, hundreds of flashcards, too much stress and too many awful professors. But I’ve had an amazing number of really awesome ones.

I want to thank Dr. Barclay Green for giving me the courage to become a published author. He restored my faith and confidence in writing. My experience as his student and young grasshopper has been nothing but groovy times. He’s one of those professors who actually gives a crap about us. Barclay has pushed me to exercise them smarts I didn’t even know I had up there. I learned to like Shakespeare, despite my fear of the unknown (It was mostly his mustache. I feared that mustache). Barclay is witty and brilliant. Take him as your professor. Love what he do.

Dr. John Alberti. He’s just that guy you wish was your dad instead. No, I’m not a crazy — it’s just fact. He’s passionate about film and dedicated to his students. He’s a person you’ll remember. After advising appointments in his office, all of my doubts about my future and about succeeding are gone. He’s also one of those teachers who can take some student’s idiot question about lettuce and bring it right back around to our discussion on “The Godfather.” This man is a magic man. Meet him.

Dr. Bob Wallace. He knows his stuff. He even knows the title of every Dickinson poem — which are just numbered. I know this because some douche bag kid thought it would be funny to steal his notes one day. And Wallace knew it all. The joke was on you, note-stealin’ jerkhole. For seriously, Wallace sees beauty in everything, especially art. I’ve never been an art person, but he likes it and thinks I’m good at it and that’s cool with me. He’s just a sweet guy who remembers your name and asks about your semester because he cares. Shake this man’s hand. Ask how his semester is going.

John Gibson. Thank you. You’re always fun and willing to listen to students and respect the request to not make anymore “Star Wars” references in your lectures. You show awesome movies in class, and you love chatting with your students. Thanks for letting me write about Titanic a bunch and encouraging my writing always. I always try to make you proud, Mr. Gibson. Students, take some classes with him. You’ll learn fun things. Mm-buh-bye.

My friends, you guys rule. Thanks, The Northerner. For putting me through hell and kicking my ass every week. You made my life suck, but I also want to take you on a date because you’re wise and wonderful. I enjoyed our abusive relationship.

These people and this newspaper, my parents and grandparents are the reasons why I’m going to look like an idiot in my cap and gown next week. Thank you.
And NKU, if you don’t lay concrete down in those parking lots, I’m coming in on a helicopter and dropping bouncy castles instead. At least our tires won’t get ripped up in a bouncy castle.