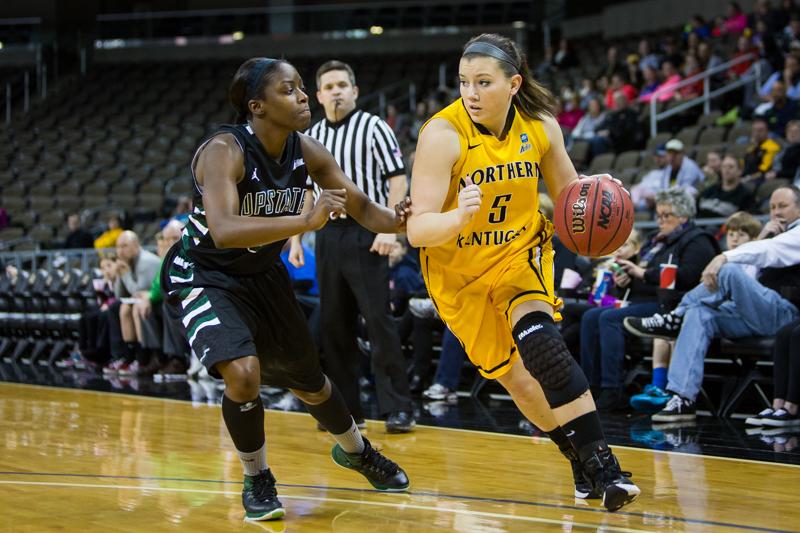 In their first ever Atlantic Sun Conference Championship game, the NKU women’s basketball team took on USC Upstate in the quarterfinals, dominating  a 64-45 win over the Spartans.

The game would get off to a slow start as the first points of the game came from two free throws by Christine Roush. NKU would take a lead they’d never give away to Upstate.

The Norse would manage 24 points the first half over the Spartans 15 despite suffering 11 turnovers.

With poor passing on both sides, USC Upstate also gave up eight turnovers in the first half.

Handling of the ball wouldn’t improve for either team as they’d close the game with NKU at 21 turnovers and Upstate at 17.

“I thought that Upstate really did a good job of coming at us and making us make  decisions and that is an area that they had some success with us in the last game and the way that our kids responded was really important,” Head Coach Dawn Plitzuweit said. “We didn’t get to into our heads and didn’t give up too many transitions.”

NKU’s field goal percentage stayed low at 36.8 percent for the game as they struggled through the first half shooting only 29.6 percent but managed 77.3 percent from the free throw line.

Melody Doss lead NKU with 14 points. Kaitlyn Gerrety had a strong presence in the game with 13 points and six rebounds while Rianna Gayheart provided eight assists.

“It’s really exciting just being able to go out and give it my all because I know it’s coming to an end,” Gerrety, a senior center, said after the game. “Being able to just play and be successful in these last couple of games is really important.”

NKU shot 77 percent from the line as they were fouled 24 times on the night with Upstate’s Maddie Herr fouling out and Brittany Starling picking up four fouls of her own.

NKU now moves on to the semifinals of the A-Sun Conference Championships to play at Stetson on March 11.