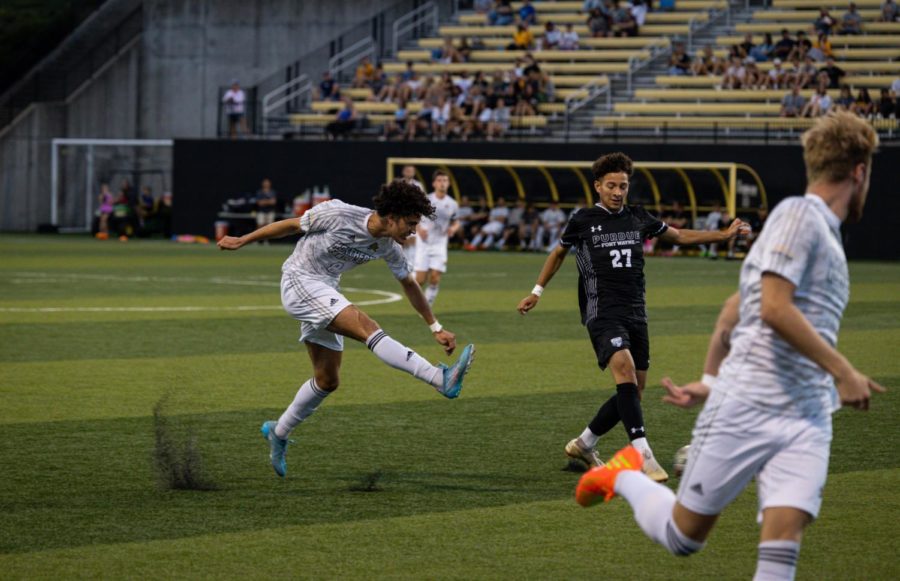 It’s not often that you see an Olimpico, but Ben Hegge made it look like a piece of cake with his corner kick goal in the NKU men’s soccer team’s 3-0 win over conference rival Purdue Fort Wayne Saturday night.

It would take a while for the Norse offense to stir, with attempts from Kyle Healy and Deryn Armstrong unable to find the net. However, Armstrong’s second attempt in the 22nd minute would hit the mark as Ryan Godding recorded the assist. They would hit paydirt again at the 43:26 mark as Brodie Sallows would finish a feed from Christian Sjølander.

The Mastodons would have multiple chances to score in the first half, with their best chance coming at the 24:30 mark. PFW forward Luke Benford would have a chance at getting his team on the board, but Norse goalie Daniel Bermingham would record the save to prevent any damage from being done.

With both offenses having an aggressive style of play, the first half was chippy to say the least: both teams combined for 16 fouls and three yellow cards, with the Norse accounting for most of both. NKU head coach Tom Poitras said that this type of atmosphere is to be expected out of conference play.

“It’s Horizon League conference play, and we know that they’re going to be competitive, we know that the games are tight,” Poitras said. “They’re coming off a draw last week in their conference game, we needed to turn around and give a good result because we dropped the game last week, so we knew it would be an intense affair.”

The second half would prove to be just as contentious as PFW’s Seth Mahlmeister would receive a yellow card. That yellow would turn to a shade of red at 55:28, handicapping the Mastodons for the rest of the game.

NKU would threaten to score a few more times as Sam Robinson would miss a pair of shots high above the crossbar. Armstrong would have another shot to score in the 66th minute but would also miss his attempt.

Then, with the game winding down in the 76th minute, Hegge would get his chance to shine with a beautiful corner kick that arched into the bottom right corner of the net, sending the Norse players into a frenzy. The goal would put the game out of reach and all but secure a vital win at home for NKU.

With the offense as prolific as it was Saturday night, Poitras would compliment his team’s willingness to share the wealth and find different ways to score.

“I think the one thing that’s a big plus for our team this year is that we can score in a lot of different ways, and it comes from a lot of different people,” Poitras said. “It makes us that much harder to defend than in the past when it was just coming from one person, and it was a little easier to key in on defense for other teams to defend those guys, and now we’re spreading the wealth.”

Poitras also commented about how important wins in conference games like these are important as the season wears on.

NKU’s record moves to 3-4 overall on the year and 1-1 in conference play, good for third place in the Horizon League standings. They’ll head to Macomb, IL on Tuesday, Sep. 20, to face non-conference opponent Western Illinois, squaring off with the Leathernecks at 5 p.m. ET.