Bothof reflects on career and accomplishments at NKU 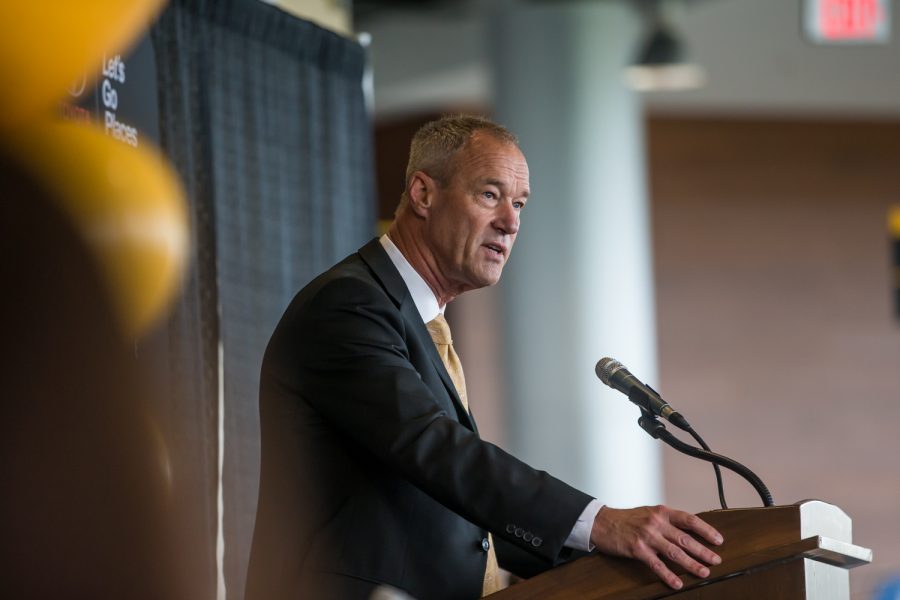 NKU President Ken Bothof gives his remarks during the press conference for the welcoming of the new Men's Basketball Head Coach Darrin Horn.

Ken Bothof announced his retirement this past semester, and with it comes the end of a career that changed Northern Kentucky University Athletics for the better.

Since his arrival, Bothof was able to create several changes and upgrades to NKU and its athletics. This included facility upgrades, marketing and communication improvements, student athlete classroom success and the transition to Division I. This started back in 2013 with his arrival as the new NKU Athletic Director, and will officially end June 30, 2022.

Once joining the school, Bothof had four major goals to achieve for his vision for NKU.

The first major goal Bothof had for the athletic department started from within. This goal was to build confidence with the school and its athletics department. He wanted to make sure that he and his staff conducted themselves in a manner that would rebuild.

This goal was essential in more ways than gaining new trust between a school and a new athletic director. The athletics department was not in the same state in 2013 as it is now in 2022. One of the major issues just prior to Bothof’s hiring was the former Athletic Director Scott Eaton’s admittance to embezzling up to $150,000.

Bothof over the course his career with the Norse was able to conduct himself and his staff in a professional manner, allowing trust to rebuild within the athletic department, not only with his professional behavior but also his ability to make the right choices

“Professionally you know, he’s going to be extremely honest with you, up front with you, caring, so you know that what he’s telling you is honest and accurate,” said associate athletic director Debbie Kirch. “I think trust, loyalty, is very important.”

The second goal Bothof looked to achieve was greater pride in the school and its athletics among the students and its surrounding community. Bothof wanted to see that the Northern Kentucky community was proud to be fans of their school, especially moving towards the transition into Division I.

This goal can be seen under success with men’s basketball sales almost tripling during his time with NKU.

“We really felt like we had an opportunity as we moved to Division I to really create that pride in our program and our university,” Bothof said.

Bothof’s third goal was to have success early in the transition to Division I. For this, Bothof needed to make sure that he had the correct coaches and staff in place.

During NKU’s first year of eligibility to make the NCAA tournament, the Norse women’s soccer team was able to make it into the tournament. Bothof believed this was the start of the success.

“I think there was always this concern that would we really be able to be successful in Division I especially early on,” said Bothof. “But then later on when men’s basketball made it to the NCAA tournament? I think that was a real game changer for us.”

The final goal Bothof set to achieve was to make sure they had the necessary resources in order to remain successful after the transition to Division I. Bothof always stayed on top of the game and helped inform his staff of all evolving procedures so as to continue success.

“He understands that college sports is evolving in all different directions,” said NKU head golf coach Daryl Landrum. “He’s trying to keep us all up to date on what’s going on all the time and makes sure we understand the whys and wants of everything.”

Bothof was able to achieve these goals and many more accomplishments. During his time student athletes had well over 3.0 cumulative GPA with the eight of the years being a 3.37.

“If you look inside of those four goals, student athlete academic success was certainly at the core of all of that,” Bothof said. “We were fortunate that we hired the right coaches or have the right coaches in place where that was a priority to them.”

Bothof has some big plans moving into retirement. He’s looking forward to catching up with his family, spending time out west, and doing some fly fishing in other states such as Idaho and Montana. But overall Bothof plans on continuing living in and enjoying the Northern Kentucky area.

“We’ve made a lot of great friends, gotten engaged in different things that we’ll remain involved in,” Bothof said. “I’m really looking forward to just becoming a fan and enjoying athletics from a standpoint of just watching.”

With just a few months left in his career, both Kirch and Landrum had expressed their thanks to Bothof and wished him the best of luck moving into retirement. Bothof also sent out a heartfelt message to NKU.